There exist a lot of vectors for a wide range of experiments, and new modified plasmids appear every year. Most of them contain different Multiple Cloning Regions (MCR)s depending on specificity of the experiments. The main problem of such the trial-and-error method is that a lot of MCRs contain a limited number of Restriction Sites (RS), which often makes the process of subcloning arduous. Here, we elaborated design of the MCR for a GeneClip vector that can be used both for cloning PCR products and transferring the insert from one plasmid to the others. So, everybody can now construct MCRs for their own vectors using this manual.

Different DNA polymerases can be used to optimize DNA amplification depending on the aim of experiment. Thermostable DNA polymerases such as Taq, Tth, Tfl are most often used to amplify the DNA fragments. These polymerases don’t have proofreading activity but can add a single base extention of deoxyadenosine to the 3´-ends of amplified products. 3’-Ts overhanging on DNA duplexes complementary to adenines of the PCR products allow to clone them directly into linearized T-vectors avoiding restriction and ligation[5, 6]. Blunt-ended products derived from PCR with proofreading Pfu and Tli polymerases can be modified with 3’-overhangs by incubating the PCR fragment with dATP and a nonproofreading DNA polymerase[7, 8, 9].

There is a variety of T-vector systems designed for efficient cloning of PCR products. T-ends of such T-vectors are surrounded by MCRs containing RE sites that can be used for the inserts transferring. However sets of RS are often limited and it is difficult to select a suitable site for subcloning the insert from a subsidiary vector to the destination one. Though subcloning is a basic molecular biology procedure, it claims a lot of time, and is not very handy when the experiment requires a number of repeats and variants or confirmations with a different object or insert. We tried to overcome these difficulties through design of universal MCR that can be used both for cloning PCR products and transferring the insert from one plasmid to the others.

Construction of Multi Cloning Region for the GeneClip vector:

The main idea of our experiment was preparing of double-stranded oligonucleotide as a polylinker with two XcmI recognition site variants for GeneClip vector. XcmI recognition sites were placed in such a way that a digestion of the modified vector with endonuclease XcmI could give rise to 3’-Ts overhanging on DNA duplexes complementary to adenines of the PCR products. It makes possible to clone PCR products directly into linearized T-vector.

RE sites for the MCR design were determined by the trial-anderror method with the help of SnapGene Viewer 2, 5 software [10], and online tool Enzyme Finder NEB[11]. Oligonucleotides mcsT1and mcsT2 (reference sequences are listed in the supplementary material) were synthesized in vitro by Syntol Company, Russia. Equimolar amounts of oligonucleotides were annealed by incubating in restriction buffer (BSA-free) for 5 min at 950С, for 15 min at 650С in water bath, and then cooled to room temperature. The synthetic MCR obtained was stored at -200С no longer than for a month.

For ligation of MCR with the GeneClip vector T4 DNA ligase with accompanying buffer was used. 50ng of the dissolved GeneClip vector, 5ng of annealed oligonucleotides, 25µl of 2xRapid ligation buffer, 1µl of T4 DNA ligase (3 units) and sterile water to final volume 50µl were mixed in a sterile micro centrifuge tube. Reaction mix was incubated in thermo cycler for 1 hour at +210С and for 3 hours at +160С, then purified with the help of Wizard SV columns, Promega, according to original protocol, and concentrated in 20µl of sterile water.

Transformation of competent cells with purified ligation mix was carried out as following. 50µl of defrosted JM109 cells were incubated with 5µl of ligation mix in sterile 2ml tube for 20min on ice, and after 45sec of heat shock at +420C were placed back on ice for 5 min. A sample was supplemented with 250ml of SOC media, incubated in a thermostatic shaker at +370C, 225 rpm for an hour. Then cells were spread over LB agar plates and incubated at 370C overnight.

For screening analysis 5 random colonies from plates were incubated in sterile 2ml tubes with 1ml of LB media with ampicillin in a thermostatic shaker at +370C, 225 rpm overnight. 200µl from each sample were then centrifuged at 5000g for 5 min. After supernatant removing, the pellets were suspended in 20µl milliQ water and incubated in boiling water bath for 10 min. After centrifugation plasmid eluates were analyzed on PCR amplification with gC(f) and gC(r) primers (reference sequences are listed in supplementary material). Samples with positive signals were isolated from 100 ml LB cell culture with the use of PureYield Plasmid Midi Prep System, Promega, and analyzed then by automatic sequencing. The probes were stored at -700C with glycerol added in equal proportions.

Plasmid DNA isolation was carried out with PureYield Plasmid MidiPrep System according to an original protocol (Promega).

5µg of a positive sample of plasmid DNA were digested in 50µl volume with 10 units of endonuclease XcmI in conditions of original restriction buffer NEB for 3 hours at +370С. After GeneClip-T-vector digestion with XcmI reaction mixture was exposed to about 30 min gel-electrophoresis in 0.8% agarose, linearized GeneClip-T-vector was isolated from gel, purified with Wizard SV columns, Promega, and dissolved in sterile water to final concentration of 50ng/µl.

To place DNA fragment coding hairpin shRNA into the pGeneClip™ Vector, two short oligonucleotides should be annealed to form a DNA insert containing the sequence of interest. After annealing, the oligonucleotides form definite overhangs that are compatible with the pGeneClip™ Vector ends and facilitate sticky-end ligation (Figure 1). Design of the insert for GeneClip is limited by the length of the oligonucleotides that can be synthesized in vitro[12], so fragments more than 200 bp can’t be inserted in a GeneClip. 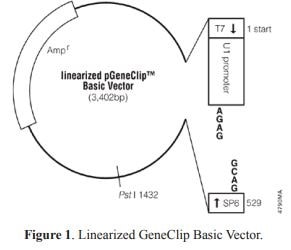 For cloning of PCR products into MCR it should contain a couple of RE sites which are able to generate T-overhangs at 3’-ends. Although such enzymes are very few in number, there exist some enzymes with single-base 3´ extension

(XcmI enzyme as an example where N can imply any nucleotide):
5’-CCANNNNN/NNNNTGG-3’.

With the help of such enzymes a T-vector can be derived from any given plasmid by an insertion of the two suitable RE sites into its MCR where 3’-ends of the both complementary chains are represented by thymine. One should take into account that it is necessary to place some nucleotides to separate the two RE sites that produce T-overhangs for more effective enzyme action. This separating site can be presented by another RE site as well. It is crucial to choose enzymes that do not cut the destination vector. The easiest way to do so is to compare the enzyme of interest with the list of noncutters for the vector.

We managed to design the MCR for the chosen GeneClip vector that makes it serve either as a T-vector for PCR products cloning or as an intermediate vector for subcloning inserts into other vectors (Figure 2).

After performing the cloning of DNA duplex into GeneClip vector we checked if the MCR works properly by restriction of present sites. Fragments of expected numbers and lengths were shown on gel-electrophoresis (Figure 3A). Additionally the compliance of designed MCR with this region in the recombinant plasmids was verified by sequencing.

After linearizing the vector with XcmI enzyme we inserted into it a PCR product of 209bp length from the human rDNA pre-promoter region (3S fragment)[13]. Its presence was tested using primers from the vector surrounding the insert; its orientation was shown with the help of one primer from the vector and the other one from the insert (Figure 4)[13]. Additional sequencing of recombinant plasmids obtained showed the compliance with the expected results. 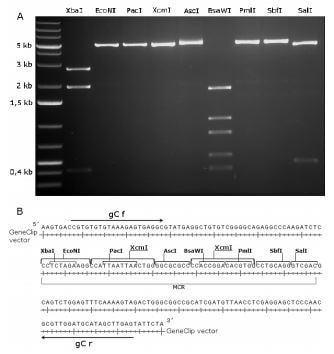 Figure 3:  A Gel-electrophoresis of restricted fragments for 9 RE sites present in MCR. As it can be observed from the photo, RE sites EcoNI, PacI, AscI, PmlI, SbfI are unique for the obtained GeneClip-T-Vector and can be used for subcloning if needed. Despite the fact that XcmI is a double-cutter for the plasmid, the only product of 5kb is observed because the second one is too small. B Multiple Cloning Region of the plasmid obtained. Primers surrounding the insert that were used for screening analysis are shown with arrows. 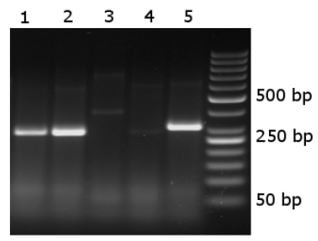 Figure 4: Gel-electrophoresis of PCR products of the GeneClipT+3S construction with specific primers gC(f) and N(r)[13]. Lines 1, 2, 5 contain 3S insertions in direct orientation. Insertions in the remaining probes have reverse orientation or are absent at all.

The major practical significance of the method proposed is enlarging of the potential of using common vectors and specific vectors as well. Transforming a vector of interest into a T-vector saves hands-on time and helps avoiding problems caused by mistakes during intermediate stages of subcloning. Personal MCR design furthers the process of individualization and allows us to use available enzymes, vectors and other reagents.

One more advantage of using synthetic MCR is that it allows having vectors and MCR itself in abundance. Since the plasmid with such an insert is not linearized it can multiply in a cell and be easily isolated when needed.

The authors have declared that no conflict of interest exists.