Cotton is very important cash crop of Pakistan and due to non-motile nature of the plants it is susceptible to different kinds of biotic and abiotic stresses. Lethal threat to cotton is cotton leaf curl virus (CLCuV) which belongs to family Geminiviridae and genus Begomovirus. Geminiviridae is often associated with sub viral agents called DNA satellites. These small pathogenic viruses which are transmitted by insects are responsible for various diseases in cotton crop. These defective interfering particles are associated with the infection like Begomovirus which is having monopartite and bipartite genomes. Our study is concerned with the DNA ß or betasatellite component of cotton leaf curl virus which is playing a tender role in cotton crop damage. Plants positive for betasatellites were confirmed for this study first by using specific primers. Then viral titre of full length virus or original virus was identified by using molecular techniques like southern blotting and real time PCR. After the detection of defective virus by southern blotting correlation study has been done between defective betasatellites and cotton leaf curl virus effected plants. Plants containing different symptoms were used in this study. Viral titers for different plants was compared with the positive plants for betasatellites. This correlation study between betasatellites and CLCuV depicts the role of betasatellites in the symptom advancements and their number is higher in highly affected plants. If infection is acute then number of betasatellites is higher. Our study helps to focus on the need to investigate another class of defective virus (alphasatellites) and their role in the infection.

Agriculture industry forges ahead to the development of the economy of Pakistan since independence. Agriculture is providing crops like wheat, rice, barley, sugarcane, cotton etc that account for more than 75% of total crop output. Agriculture subsidizes 21.5 % of GDP and utilizes 45 percent of nation’s work resources of Pakistan(Tariq, Afzal, Hussain, & Sultana, 2007).

Cotton leaf curl virus is the most threatening disease amidst defective DNA diseases having a dysfunctional mosaic pattern, upward and downward curling of the leaf. In 1979, cotton leaf curl virus disease was first reported in cotton crop in Multan, Pakistan which is a tropical hot region. Cotton leaf curl virus disease emerged lately in 1991 as the epidemic outbreak and in next year’s it reduced the production drastically from 12.80 million bales in 1991 to 8.4 million bales in 1994(M. Hussain, Azhar, Khan, & Ali, 2012). This virus has single stranded DNA as defective particle. Defective interfering particles contain both RNA and DNA in genome are quite persistent in producing viral infections (A. S. Huang, 1973). Most of the cases, interfering ability of defective particles is not affirmed to significant level therefore called defective DNA or sub genomic DNA (Patil & Dasgupta, 2006).

The genus Begomovirus find to consists of geminiviruses which are transmitted through whitefly as vector and in which preponderances have two types of genome or bipartite genome comprising two ssDNA components, known as DNA A and DNA-ß (Amudha et al., 2010). Some begomoviruses possess a single genomic component that has all machinery mandatory for multiplication of normal virus and locomotion within the plant. Defective interfering particles are half in size from the genomic DNA present in plants infected with viruses (Paximadis & Rey, 2001).

Southern blotting is a molecular technique in which DNA fragments are transferred from gel to nitrocellulose membrane and hybridized by probe. Southern blotting could be performed by using restriction endonucleases digested DNA most frequently (T. Brown, 1993) so defective particles and be studied through this techniques.

Leaf samples of the cotton variety MNH-786 were taken from a cotton experimental field located in CEMB (Centre for Excellence in Molecular biology). Virus resistant cotton plants were categorized in (1) highly symptomatic that have high level of leaf curling either upward or downward direction. The veins of the leaves are thicker on the underside of the leaf. (2) Moderately symptomatic that have viral attack up to a certain limit. They have less amount of symptoms appeared on them. They were being chooses and (3) resistant that are virus free control plants have also chosen for virus correlation study.

2.1 Designing of primer and probe for betasatellites:

Primer were constructed for the C1 portion of betasatellite. The sequence was accessed from NCBI with accession number FR873751.1 and following primers were designed i.e., BetaC1-F 5’TTCCTATTCGCATACAACGG’3, BetaC1-R 5’ATGCATTGCTGGTTTGTGTT’3.

2.2 Amplification and cloning of CLCuV betasatellite:

CTAB method with same adaptations as (Khan et al., 2015) was used to extract genomic DNA of transgenic cotton plants. To check the concentration and quantity of extracting DNA, it was running on 0.8% gel. 0.8% agarose. After isolation PCR was performed. Reaction mix comprises 2 μL of rolling circle amplification product template having the concentration of 10ng/ μL 2.5ul of 10X PCR buffer (Fermentas cat#B34), 2.5 μL of 2mM dNTPs, 1.5ul of MgCl2( (Fermentas cat# R0971), 1ul of each forward primer (C1- F) and reverse primer (C1-R) having the concentration of 5 μL Taq polymerase enzyme (Fermentas cat# EP0071) were used. 14 μL of water was added to makeup final volume of reaction. The PCR product was viewed at 1.5 % agarose gel in 1X TAE buffer. PCR conditions are given below. DNA product was ligated in TA vector with the aid of Ptzr/T and positive colonies were confirmed by PCR after plasmid isolation. 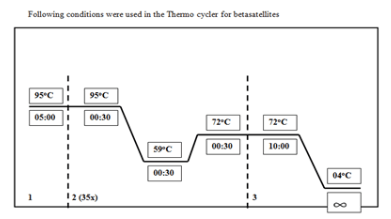 Southern blotting is the technique used to detect DNA sequences in DNA samples. It’s the transfer of electrophoretic separated fragments on a nitrocellulose membrane resulting in immobilization of DNA. After immobilization DNA is subjected to hybridization by using specific probe (M. S. Clark, 2013). It comprises of following steps i.e., (1) DNA purification (2) Gel electrophoresis (3) Denaturing and blotting (4) Hybridization (5) Washing and autoradiography. At first a gel was run with 50 bp ladder and DNA template along with positive cotton betasatellite DNA. Gel was run for 3 hours without any break at 100 V. After the gel was properly run it was placed under UV. After it was observed under UV gel was depurinated by adding depurination solution (0.25 N HCL) in tray. Tray was washed with autoclaved water twice for 15 min. After this denature the gel by adding denaturation solution (0.5N NaOH, 0.5M Nacl, H2O) and put on shaker for about 45 minutes. Gel was washed with autoclaved water twice. Gel was neutralized with neutralization solution (1M Tris PH: 8, 1.5M Nacl,) for 30 minutes. The southern blot was performed according to the protocol of Southern, 1973. (Bajwa et al. 2013) 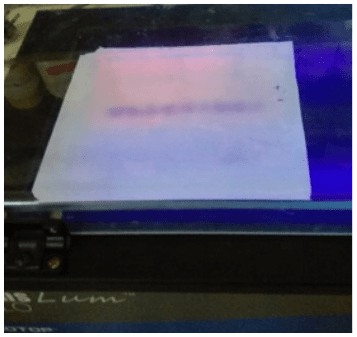 Real time PCR is an advancement in polymerase chain reaction in which quantity of nucleic acids from a mixture can be done by fluorescent detection of PCR products. Specific and non specific probes are used (Arya et al., 2014) with the same condition describes above.

3.1 Sampling groups based on symptoms

Plants (Gossyypium hirsutum) were being selected on the basic of the severity of the infection and no infection at all. They were categorized in three groups. Sampling was done from the fields in center of excellence in molecular biology Lahore. 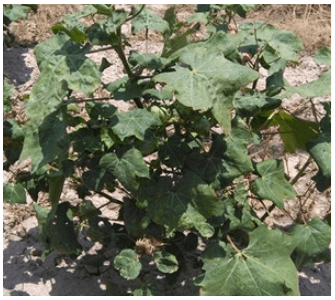 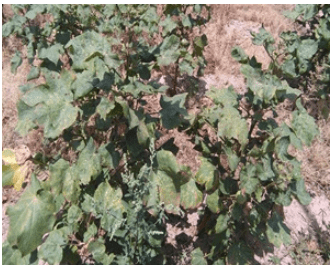 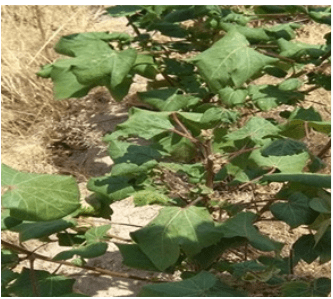 DNA from a cotton variety grown in the fields of Center of excellence in molecular biology was extracted by CTAB method. Expected DNA concentration in the gel is shown in the figure. 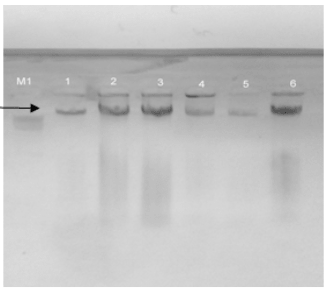 Plasmid Isolation of betasatellites (extraction, cloning, transformation) After the transformation the LB plates having ampicilin resistance spread with the product and keep on incubation for whole night at 37°C (figure 4).

The gel was then placed in assembly to transfer the DNA from gel to nitrocellulose membrane. DNA of cotton plants Gossypium hisutum was blotted on nitrocellulose membrane and hybridized with probe. Defective DNA ß virus has been detected in plants affecting with cotton leaf curl virus through southern blot analysis. The picture 5 shows the 1 as the DNA from plant which was mild symptomatic, 2 represents resistant plant, 3 represents the plant having highly symptomatic of cotton leaf curl virus while 4 represents plant positive for betasatellites. So defective betasatellites have been detected by southern blotting from different plants having different status of symptoms and infection (figure 6). 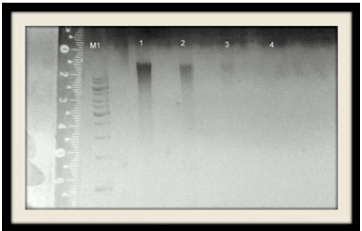 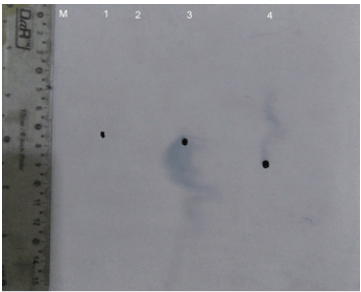 Fig 6:   Hybridization pattern on nitrocellulose membrane in which the M is ladder, lane1-3 are DNA samples from three plants. Lane 4 represents the positive plant.

Comparison of both figures shows the successful transformation of DNA from the agarose gel to nitrocellulose membrane. Scale helps to know the exact location of the DNA present on gel and then membrane after hybridization. So defective particles have been identified through southern blotting.

Defective DNA or betasatellites are evident from the real time PCR results. This graph shows the quantitative values of the viral particles inside each plant having different level of symptoms. In figure 7, plant 1 is showing high number of betasatellites as compared to the resistant plant which is none. So defective DNA particles tend to hamper the infection and they may associate with the infection depending upon the replication machinery from their helper virus.

Cotton is being attacked by plenty of diseases. Among all CLCuV considered to be threatening in case of loss bringing maladies. Defective DNA particles are more common in infections. Aside from the lengthy viral genomes, some DNA viruses that affect plants are usually smaller in size (subviral molecules). In several cases, their interfering nature is not affirmed to significant level therefore called defective DNA or sub genomic DNA (Marcus & Sekellick, 1977). Full virus or helper virus present in plants, often contain small versions of the DNA they rendered to be defective and have an interfering nature (A. S. Huang, 1973). In our study prime focus is on the role of betasatellites or defective interfering viral DNA of cotton leaf curl virus in the pathogenicity of the disease. As defective DNA are found to involve in the symptom amelioration of a disease. Their presence is burden on the helper virus because they hinder the work of helper virus. In this study positive virus affected plants for betasatellites have been identified. In order to compute the betasatellites probes and primers were designed as shown in figure. After the transformation, platting white colonies were picked and Miniprep was performed. DNA from the samples was confirmed through southern blotting (Figure 1). Hybridization of the betasatellites probe with the DNA fragments on the nitrocellulose membrane indicates the DNA fragments contain sequences complementary to the betasatellites evident from the figure 6. So defective virus (betasatellites) have been detected through southern blotting in virus affected plants which are burden on the full length and helper viruses.

Real time PCR was performed to quantify the viral titre of the plants. It clearly depicts the level of viral components in the plants and the viral titres vary in different plants which are at different level of infection (vary from highly symptomatic to moderately symptomatic and totally resistant plants). Number of betasatellites tends to be higher in plants with high level of infection (Figure 7). Real time analysis shows the numbers of betasatellites tend to be higher in plants which were highly symptomatic as represented in graph. Betasatellites are present in fewer amounts in plans having moderate symptoms of diseases. And it’s almost absent in resistant plants.

This correlation study between betasatellites and CLCuV depicts the role of betasatellites in the symptom advancements and their number is higher in highly affected plants as explained earlier in real time figure 7. If infection is acute then number of betasatellites is higher. They also compete with helper virus when co inoculated.

Our study helps to focus on the need to investigate about another class of defective virus (alphasatellites) and their role in the infection. There is an urgent need to introduce or breed crops with broad-spectrum resistance to cope with possible emergence of new begomovirus complexes.