Lead(Pb) is one of the most widely used heavy metals that has wide applications in such products as storage batteries (lead accumulator), electric cable sheaths, alloys, pesticides, paints, petrol and rubber products among other uses [1] . In water bodies, Pb forms complexes with sediments or organic materials [2] . and in the process enters the food chain. The problem posed by Pb in the aquatic system is complex due to its non-degradability and interactions with other materials to form complexes that may potentiate their toxic effects[3] Lead deposits in various fish organs: liver, kidneys and spleen, but also digestive tract and gills [4]. Accumulation of lead in different fish species has been determined in several works[5], leading to disorders in fish body. When C. batrachus exposed to 5 ppm of lead nitrate for 150 days,

it exhibited marked inhibition of gonadal growth and showed decrease in cholesterol and lipid levels in brain, testis and ovary whereas the liver showed an elevation of both [6]. [7] observed a very high number of red let cells (RCs) in the epidermis of common carp and rainbow trout kept in lead polluted water. Hepatocyte vacuolization, hepatic cirrhosis, necrosis, shrinkage, parenchyma degeneration, nuclear psychosis and increase of sinusoidal spaces were the distinct changes observed in the liver of lead-exposed fish [8]. The characteristic symptoms of chronic lead toxicity include changes in the blood parameters with severe damage to erythrocytes and leucocytes and damage in the nervous system [9]. Low levels of Pb pollution could cause some adverse effects on fish health and reproduction [10]. Also, lead was found to impair the embryonic and larval development of fish species [11]. [12] monitored the effect of lead on the Chinese sturgeon, Acipenser sinensis.

They observed deformities as body (spinal) curvatures. The authors also reported reduced ability of locomotion and foraging by deformed juveniles. The purpose of the study was therefore to investigate the effect of sub lethal lead on the leucocyte and some biochemical parameters in grey mullet Mugil cephalus,L- with a view to using them as biomarkers of lead toxicity.

Collection and handling of experimental of fish. :

The fish fingerlings were bought from Fish Farms at Manzalla lake Damietta , and transported to a wet laboratory in two 50 L plastic fish transport containers during march 2015 . Once in the wet laboratory, fish was introduced into 200 L plastic container for acclimatization for two week . The water was continually aerated to ensure that the dissolved oxygen level remained above 6 mg/L and fish were fed on a 32% crude protein diet at 3% body weight daily at 10.0 h. The laboratory water was analyzed for different physico-chemical parameters (APHA, 2010) and lead. No fish mortality was recorded during acclimatization. The LC50 value for lead was statistically determined [13]

Experimental design and in vivo studies:

One hundred and twenty fingerlings of Mugil Cephalus L, (mean length of 12.00±2.25 cm and average weight of 35±3.20g) were used for this study. They were divided into three groups of forty fingerlings per each. Each group was further divided into two replicates, twenty fish per replicate. Fish were exposed to 0.1 mg Pb /L and the second group was exposed to 0.4 mg Pb /L. The third group was exposed to tap water only and it served as control group. The water in the experiment was changed every day to maintain the same Pb concentrations. Three fish from each replicate experiment was killed every seven days for twenty eight days for the analysis.

The blood of the fish was collected every seven days through both cardiac puncture [14] . The blood was collected into three different vials . One of the vials containing fluoride oxalate was use to collect blood used for glucose determination. The other two vials were without anticoagulant and were used to collect the blood for the biochemical test, and thin blood smear.

The leucocyte count was done using the Neubauer microscopic counter after diluting the blood with Turk’s dilution fluid. The differential white blood cell count was done by preparing a thin blood smear and staining same with Geimsa Romanosky stain [15]. The stained blood was left for 25 minutes for the Geimsa stain to act on it. Thereafter the stained blood was flooded with distilled water and rocked gently to evenly mix the distilled water and stain. The stained blood was washed with water and allowed to dry. The slide was viewed with a binocular microscope to identify the leukocyte species which was calculated as a percentage.

The blood serum was obtained by centrifuging the blood sample at 5000 rpm for five minutes and the protein in the samples was spectrophotometrically determined using Biuret method [16] at 540 nm. The blood glucose was determined by [17] method and the cholesterol concentration was determined by the method of [18].

The changes in the total leucocytes and differential white blood cell count Pb- exposed to Fish are presented in (Table 2) . The leucocytes count in the control group did not vary ( p > 0.05) significantly during the study. The leucocytes counts increased significantly with increasing Pb concentrations and exposure period. Five different subspecies of leucocytes (lymphocytes, monocytes, neutrophils, eosinophils and basophils) were identified in the fish during the study. The lymphocyte and the monocytes constituted the a granulocytes identified while neutrophil, eosinophils and basophils were the granulocytes recorded due to the presence of granules in their cytoplasm. The lymphocytes were the most abundant leucocytes group identified in the blood of the fish exposed to lead acetate . Both small and large lymphocytes were found during the study and they accounted for more than 80 % of the white blood cells. The lymphocytes increased significantly ( p < 0.05) in the lead-exposed fish when compared with the control group .

The lymphocytes were significantly different (p> 0.05) in the treatment groups and the lymphocytosis was both concentration and duration dependent. The monocytes decreased in the lead-exposed fish on the 7th day and thereafter, it increased significantly in the treatment groups ( p <0.05) when compared with the control group . The basophiles were the most abundant granular leucocytes in the peripheral blood of Mugil cephalus,L- exposed to lead acetate . The proportion was highest in the first week and on day 21 of the study. The neutrophils are the second largest granular white blood cell in the fish while the eosinophils are the least abundant subpopulation.

The results taken at the same time points showed little differences in the control group scores, both of which were below the cutoff value (<26 points).

The results showed that the protein level in the control did not vary (p > 0.05) throughout the study while the serum protein in the Pb – exposed fish did not differ ( p > 0.05) from the control value during the first 14 days ( Table 3). Generally, there was progressive concentration and duration dependent increases in the serum protein in the Pb–exposed fish as it increased from 4.04±0.06mg/ dl on day 7 to 5.30±0.05 mg/dl on day 28 in the fish exposed to 0.1mg Pb /L. When the fish treated with 0.4mg Pb /L, the serum protein increased from 4.45±0.37 mg/dl on day 7 to 6.18±0.19 mg/ dl on day 28, respectively. Statistical analysis showed that serum protein levels in the treatment groups differed significantly ( p <0.05) at the end of the study. 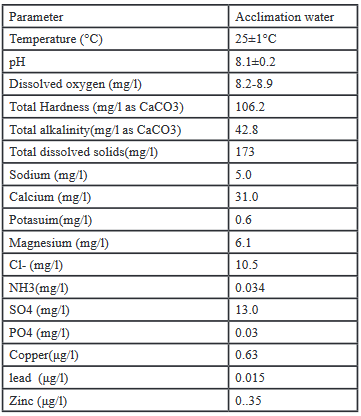 The results of the study show that lead has significant effects on the leucocyte count of Mugil cephalus L- and the small lymphocytes decreased in number while the neutrophils increased. On the contrary, [20] found decreased leucocyte counts in Clarias gariepinus exposed to 0.45mg Pb /L for 4 to 5 days. The general leucocytosis reported in this study is consistent with the observation of [21] in the dogfish exposed to 50μg/L Cd for 4 days.

Changes of blood glucose are a good indicator of metal stress in fish [22] and alterations in the glucose level might be related to renal injury, liver damage, and lack of nutrition [23]. This study showed a dose- dependent increase of glucose level after first 15- days. The observed increase in the serum glucose level in Mugil Cephalus L, exposed to lead in this study is in accord with report of some earlier workers. Similar increase in plasma glucose was also reported in Prochidolus lineatus exposed to lead [24] and in Oreochromis niloticus exposed to copper [25]. It has been widely reported that hyperglycaemia in fish arises due to the stimulation of catecholamines and corticosteroids [26]

The increased serum glucose level in this study is an evidence of stress due to lead exposure as [27] argued that coping with such stress is an energy demanding process that requires the fish to mobilize metabolically energy substrates through intense gluconeogenesis. Glucose being one of such known substrates is mobilized through gluconeogenesis to meet this challenge [28] . Heavy metals have been reported to act antagonistically with glucocorticoids by inhibiting the receptors thereby disrupting the osmotic and mineral regulatory mechanisms [29]. Serum increase in glucose due to toxicants has have been associated with hypothalamus-sympathetic-chromaffin cells [30] instead of the hypothalamus-pituitary-internal axis [31] that is known to have tremendous influence on carbohydrate metabolism.

The enhanced serum cholesterol in this study is an indication of hypercholesteremia in the fish due to the stimulatory effect on the cholesterol biosynthetic pathway. Reduced serum cholesterol level has been reported in Oreochromis niloticus exposed to some heavy metals [35], [27] and in Lepomis macrochirus exposed to methyl mercuric chloride [36].Cholesterol concentration in the serum of cadmium exposed fish also showed a different pattern. Another study showed a reduction in cholesterol within 15-days, possibly due to tissue damage in the kidney[37]. On the contrary, in Oreochromis niloticus, an increase in cholesterol was seen during a 21 day period due to cadmium [38].

Generally, the leucocytosis observed in this study gives indication that exposing the fish to lead predisposes it to secondary infections. Also, the reported hyperglycemia, increased serum protein and cholesterol levels are indications of altered carbohydrate, lipid and protein metabolism in the fish due to lead exposure. Serum parameters which provide information as to state of the internal environment of the fish are known to respond quickly to changes in the water quality. The changes in these biomarkers are a reflection of organ dysfunction in the fish due to metal exposure and these biomarkers could be used in ecotoxicological assessment and as early warning indicators of pollution.