Water with special healing properties has been reported for generations to contain health beneﬁ ts and abilities to cure diseases. Water from locations including Nordenau in Germany and Lourdes in Paris have been analysed to deduce the special characteristics of the water that provide the healing properties. In this study, natural bedrock underground water from Baegunsan mountain in Idong- myeon, Pocheon- si, Gyeonggi- go, Korea was analysed for beneﬁ cial properties. The alkalescent hydrogen-water which is termed TaeCheongsu water was tested for superoxide anion radical scavenging activities (SOSA), size of water molecules, active hydrogen content, hydrogen peroxide degradation capability and dissolved oxygen content. The results for TaeCheongsu water was compared against tap water, Stephan water, Nordenauer water and Lourdes water. TaeCheongsu water showed superior results compared to other healing waters and against controls across all tests. Therefore, TaeCheongsu healing water is a high quality water with potential beneﬁ ts for health.

The existence of ‘healing waters’ from different locations has been acknowledged across several generations with having health beneﬁts and ability to cure certain diseases. They have been used widely in homeopathy and complementary medicine for the treatment of a wide range of medical conditions[1]. Lourdes (France), Nordenau (Germany), Hunza (Pakistan), Nadana (India), Tlacote (Mexico), Stephan (Poland), Maricial (Russia) and the Great Salt Lake (USA) are some locations with natural water bodies that have been historically renowned for their health beneﬁts and ability to ‘heal’[2]. Studies on the content of healing waters have been carried out to identify the compositions leading to their healing properties[3,4,5,6,7,8]. Minerals constituents in the water have been credited for their health beneﬁts[9] and the prevention of diseases, including hypertension[10].

Nordenau water from Germany has been reported with unusually high alkalinity and anti- oxidizing potential[11], while Hita Tenryosui water from Hita, Oita, Japan is reported as a natural reduced water. Both have been implicated in the treatment of diabetes mellitus[5]. Additionally, these waters have been reported to exert antioxidant effects which have protective effects against diseases[12]. In this short communication, we attempt to deduce the superoxide anion radical scavenging activity, water molecule size, active hydrogen, dissolved oxygen and hydrogen peroxide degradation capability of water sourced from Baegunsan mountain in Gyeonggi- go, Korea and compare the results to other sources of healing waters.

SOSA was determined using a spin trapping method using and ESR spectrometer following the method described by Noda and his team of researchers[13]. A standard graph was generated to which all the peaks were compared. The base value was set at 100 units/ml. SOSA values higher than the base value were considered to have substantial SOSA capability.

Water molecule size was measured using an NMR detector (17O- NMR). The water temperature was held constant before measuring to prevent fluctuations in reading. Variation in water signal was observed and recorded.

Two methods were used for the measurement of dissolved oxygen in water. The ﬁrst method was constant test and the second was using diaphragm electrode process. Oxygen saturation at 18 °C was measured and compared against controls. 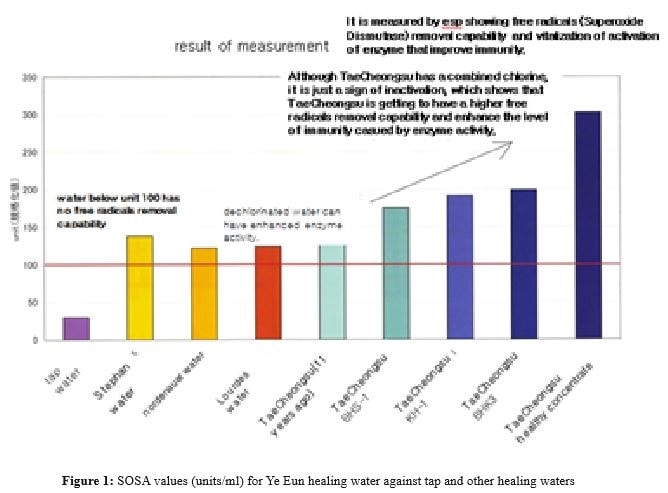 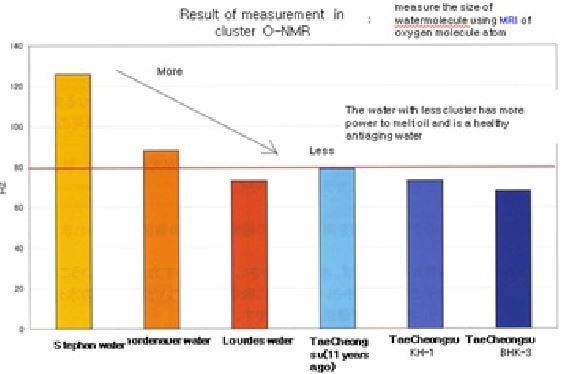 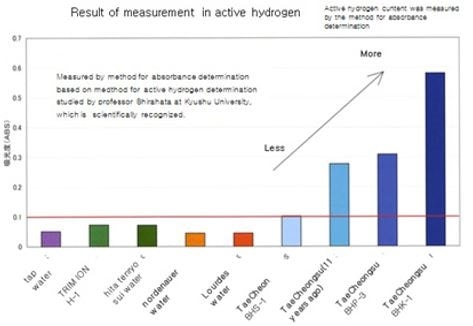 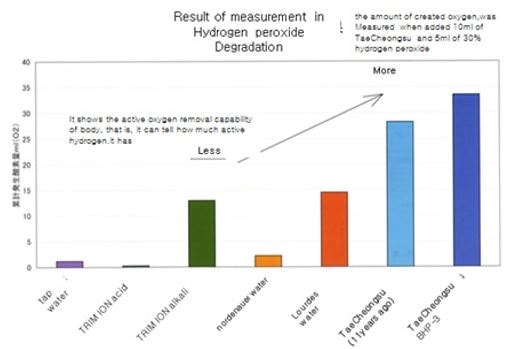 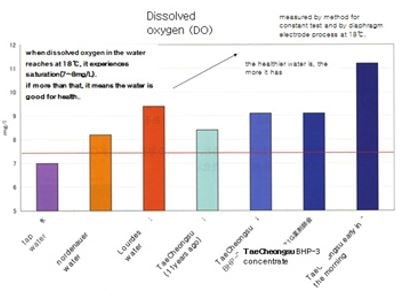 Reactive oxygen species (ROS) cause irreversible damage to biological macromolecules, resulting in many diseases. Superoxide anion radicals (O2-) are one of the most destructive reactive oxygen species. They are harmful to living cells and also reduce the quality of water by starting a chain reaction, leading to the formation of more free radicals, including hydrogen peroxide and hydroxyl radicals. Antioxidants are normally applied to prevent the oxidation of such molecules that form harmful reactive molecules.

In living organisms, superoxide anion radicals are removed by the enzyme superoxide dismutase (SOD), which converts the superoxide radical into either ordinary molecular oxygen (O2) or hydrogen peroxide (H2O2)[16],[17].

The superoxide anion radical scavenging activities (SOSA) of water refer to the ability of water to prevent further oxidation of the superoxide anion radicals. It is also a measure of the increase of the anti- oxidative enzyme superoxide dismutase (SOD) to enhance the level of immunity in living organisms. The results show that TaeCheongsu waters showed signiﬁcant antioxidant capability and potentially increases vitalization of the SOD enzyme in living organisms.

Our results show that TaeCheongsu BHK-3 and TaeCheongsu KH-1 had the smallest cluster sizes with frequency of ~70 hz. This was followed by Lourdes water (~75 hz), 11 years old TaeCheongsu water (~80 hz), Nordenauer water (~90 hz) and ﬁnally Stephan water with largest cluster size of ~120 hz. Smaller width (high frequency) readings are more preferable, because it denotes a smaller water molecule size with capabilities to melt oil. Moreover, the smaller size means the water molecule is easily absorbed into the body, thus exerting anti-aging properties in the body

Lourdes and Nordenauer healing waters showed values of ~0.05A, which was very similar to tap water. TRIM ION H-1 and Hita Tenryosui water from Japan showed slightly better values at close to 0.1 A. Active oxygen, which is a free radical, can be neutralized by active hydrogen. The active hydrogen presents suppressive effects on diseases related to oxidative- stress, as reported by several papers[14]. Therefore, a high active hydrogen content is beneﬁcial to health in its capacity to prevent cell damage due to oxidation

Hydrogen peroxide is one of the two products of the enzyme superoxide dismutase (SOD) which is less desirable. It is also an active oxygen with harmful properties to the body. The ability of water to decompose hydrogen peroxide into water and oxygen is a highly sought after quality.

The present study showed that the antioxidant properties (SOSA), water cluster, dissolved oxygen, active hydrogen and hydrogen peroxide degradation capability for taecheongsu water were signiﬁcantly better than tap and other natural healing waters, including Lourdes, Nordenauer and Hita Tenryosui waters. The outcome presents interesting composition of the taecheongsu water against other waters and presents this water as a promising natural source of antioxidant against radicals and for the general promotion of health. The study may encourage more awareness of the health beneﬁts of natural taecheongsu healing water and increase its consumption.