In this review article we discuss the classifications of anthracycline antibiotic drugs, their mechanism of action and role as an imaging and therapeutic agent along with their future perspectives. Anthracyclines are the compounds isolated in early 1960s from the soil pigments named streptomyces peucetius. They are most effective chemotherapeutic agents and shows incredible effectiveness against a broad range of malignancies including solid and hematological tumors (e.g. gastric cancer, lymphoma, leukemia, small cell lungs cancer, breast cancer, sarcomas, and ovarian cancer). The most commonly used anthracyclines include daunorubicin, doxorubicin, epirubicin, valrubicin, idarubicin and mitoxantrone. These drugs have tremendous role in treating the cancer patients with remarkable effectiveness. Here, we discuss in detail about the use of anthracycline antibiotics as a potential drug for diagnosis of early stage cancer and its therapeutic efficiency.

The drug anthracycline is an important class of antibiotic chemotherapeutic agent which was originally derived from a soil bacterium Streptomyces peucetius and it was first used as an anti-tumor agent in 1960s (Fujiwara et al. 1985). The anthracyclines are among the first most effective chemotherapeutic agent and are effectively employed against common malignancies such as: leukemia, lymphoma, and breast cancer, bladder cancer, uterine cancer, bowel cancer, endometrium, lung, ovaries, stomach and thyroid, and other broad spectrum of therapies which make it first line chemotherapeutic drugs (Minotti et al. 2004). The generic name anthracycline was given by H. Brockmann to a group of glycosidic compounds whose aglycones, called anthracyclinones, had a basic structure of 7,8,9,10-Tetrahydro-5,12-naphthacene quinone (Fig. 1). Anthracyclines are red aromatic polyketides and available in large variety of forms because of structural differences in the aglycone (Fujiwara et al. 1985). Recent advancements in both practical variations and theoretical knowledge have results in introducing a small handful of anthracycline derivatives to market. The first discovery in the class of anthracyclines was daunorubicin, which is extracted naturally from Streptomyces peucetius, a species of actinobacteria. After a very short interval of time, another derivative of anthracycline was developed named doxorubicin and many other relevant compounds were also synthesized, although a few of them are used clinically at present (Faheem et al. 2013).

The fast growing family of anthracyclines include up to 2000 known derivatives. Among these several anthracyclines are anti-cancer drugs and the synthetic as well as structural changes are still made to discover such analogs which have no cardiotoxicity while having favorable effectiveness (Minotti et al. 2004). According to a published report of NCI, nearly 400 anthracycline aglycones and glycosides obtained from different ways were evaluated using screening program like DTC (Fujiwara et al. 1985). The followings are the most commonly used chemotherapeutic anthracyclines derivatives today:

Daunorubicin was the first anthracycline analog which was characterized structurally and stereochemically. It is used to treat acute lymphoblastic and myeloblastic leukaemias and also used as a potential brain imaging and theranostic agent (Faheem et al. 2013). Doxorubicin is a hydroxyl derivative of daunorubicin. Doxorubicin has significant usage as a chemotherapeutic agent and mostly prescribed in combination with other chemotherapeutic drugs. It has a broad spectrum of acitivity against a number of solid tumor treatments like, small cell lungs cancer, stomach, breast cancer, ovarian carcinoma, liver, Ewings and osteogenic bone tumor, thyroid tumor, soft tissue sarcoma, Wilms tumor and neuroblastoma. It is also active against different types of myeloma, leukaemia and cutaeneous T-cell lymphomas (Fujiwara et al. 1985). Being resistant towards tumor cell, dose dependent cardiotoxicity and many other side-effects, structural variations are made to daunorubicin and doxorubicin and their analogs are discovered which have lower toxicity and wider activity. A large number of analogs were derived to find a better anthracycline and over the years more than 2000 analogs are available at present (Minotti et al. 2004). Although only a small numbers of anthracycline analogs like epirubicin, amrubicin, idarubicin and mitoxantrone have been selected for clinical applications (Arcamone et al. 1985).

Epirubicin is the stereomer of doxorubicin and only the difference is in the direction of attachment of C-4 hydroxyl group on the sugar ring. Due to this slightly structural change, epirubicin has less cardiotoxicity as compare to doxorubicin. Epirubicin is used to treat gastric and breast cancer as well as carcinoid, lungs, endometrial, ovarian, prostate cancer and esophageal and soft tissue sarcomas (Arcamone et al. 1985). Idarubicin is a derivative of daunorubicin. It is deficient in methoxy group at C-4 position and this deficiency results in increase the lipophilicity of idarubicin. It is clinically used as induction therapy for acute myelogeneous leukaemia (Arcamone et al. 1985). Valrubicin is also another derivative of doxorubicin in addition to the N-trifluoroacetyl, 1-4-valerate group. It is specifically used to diagnose the bladder cancer of initial stage (Kuznetsov et al. 2001). Mitoxantrone is a synthetic anthracenedione derivative of anthracyclines and is an antineoplastic, ammunomodulatory agent. Its clinical use is for the treatment of many types of cancer, specifically metastatic breast cancer, non-Hodgkin's lymphoma and acute myeloid leukemia. Mitoxantrone shows an improve survival rate for the children suffering from first relapse of acute lymphoblastic leukemia (Catriona et al. 2010).

The mechanism of action of anthracyclines is varying according to the nature of tumor and stereochemical nature of the drugs. Shortly, anthracyclines intercalate between the base pairs of DNA (or RNA), thus inhibits the DNA replication and transcription of RNA, resulting decrease in replication of fast growing cancer cells (Francis et al. 1992). They also causes the inhibition of the topoisomerase II enzyme (which is an essential enzyme localized in nucleus and plays important role in replication and survival of cells) which stabilizes the topoisomerase II complex affecting the nucleoside by the prevention of supercoiled DNA relaxation and resulting increase in the breakage of DNA replication (Pommier et al. 2010). The intercalation of anthracyclines is followed by the transportation of drug into the proliferating cell (Bontenbal et al. 1988; Dimanche et al. 1994) via passive diffusion (Skovsgaard and Nissen 1982), showing remarkable binding capabilities with cytoplasmic proteasomes (an intracellular proteinase complex degrades protein through nonlysosomal pathway). This proteasome leads the drug into the nucleus (or cytoplasm) of the eukaryotic cells in the form of anthracycline-proteasome complex through nuclear pores because it possessing nuclear localization signals. Here in the nucleus, the interaction of anthracyclines is much more favorable with DNA as compare to proteasome. So, it leaves the proteasome and intercalates with DNA, resulting in inhibition of DNA synthesis. Parallel to it, anthracycline-proteasome complex exhibits low protease activity, thus processing and degradation of regulatory proteins which are responsible for cell growth and metabolism, can be stopped by inhibiting the proteasome activity and results in inducing apoptosis of tumour cells (Palmer et al. 1994; Rivett et al. 1992; Amsterdam et al. 1993; Kiyomiya et al. 2001). The pictorial representation of this mechanism is as followed:

Figure 3:Pictorial illustration of the mechanism of nuclear transport of proteasome-anthracycline complex
Cardiotoxicity

Anthracyclines are cardiotoxic to some extent. This cardiotoxicity is caused by the inhibition and poisoning of topoisoperase-IIB in cardiomyocytes (Zhang et al. 2012), free radical formation in the heart, or due to the production of metabolic species of the anthracycline in the heart and also caused by the interference with ryanodine receptors of sarcoplasmic reticulum. Sometimes cardiotoxicity presents as arrhythmias, ECG changes or as a cardiomyopathy resulting in heart failure. This cardiotoxicity is linked with the cumulative lifetime dose of a patient, which is calculated during treatment. Thus treatment with anthracycline is reduced when the cumulative dose of a particular anthracycline reached to a maximum level (i.e 600 mg/m2) (Minotti et al. 2004). Strong evidences showed that the effect of cardiotoxicity increases in long-term survivors from 2% to 5% after 2 years to 15 years respectively (Kremer et al. 2001). In case of staying below the cumulative doses, the oncologists must have to take several prevention measures to reduce the risk of cardiotoxicity. Cardiac monitoring is recommended at 3, 6, and 9 months for a patient. Other measures that must be taken by oncologist include the usage of dexrazoxane (iron-chelating agent) and the use of liposomal anthracyclines (Minotti et al. 2004). Dexrazoxane is used as an effective cardio-protectant that reduces the risk of anthracycline cardiotoxicity to about two-thirds, without affecting the overall survival and chemotherapy response by inhibiting the free-radical formation (Swain et al. 1997). Anthracyclines in liposomal formulations are less toxic to cardiac tissues as compare to non-liposomal forms; the reason is that a small amount of liposomal drug administered to patient is delivered to his heart (Forssen and Tokes 1979) alters the half-life and bioavailability of the liposomal drug, thus reducing the cardiotoxicity effects and enhanced efficacy (Easic 1992).

Liposomal anthracyclines are the class of drugs that play a key role in decreasing the cardiotoxicity of the drugs while maintaining their effectiveness and efficiency even at high dose level as compare to same dose of free drug (Zunino 1972). A significant decrease in congestive heart failure (CHF) was also reported in early clinical trials and their anti-cancer effectiveness was measured. The actual mechanism of the reduction of cardiotoxicity by lipid capsule (lysosomes) is still not understood, but it was assumed that cancerous cell provide a microvasculature product which has remarkable permeability. The cancer cell produces “leakier” blood vessels so they absorb the lipid-encapsulated drugs in greater quantity. But these lysosomal drugs have significant binding affinity with proteins of healthy cells and hence deliver the chemotherapy for over a long period of time, also enhancing the effectiveness of the drug as compare to standard formulations (Rivera 2003). On the other hand, lysosomes alter the traditional distribution pattern of drugs and serves as protective vehicle (Rahman 1978), hence increasing the therapeutic potential of the drug. 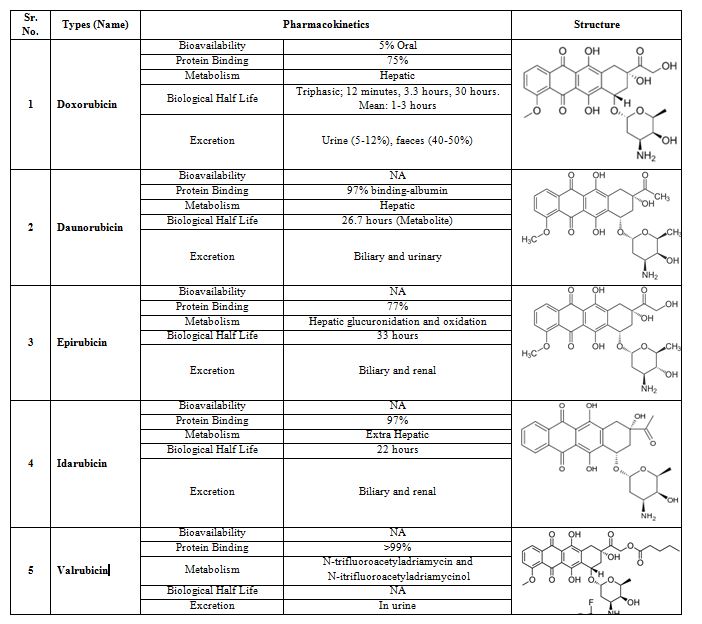 Table 1: Comprehensive detail based on pharmacokinetics about few anthracycline drugs which are currently in pre-clinical and clinical trials
Anthracycline as a therapeutic imaging agent
For over twenty years, anthracyclines have been a mainstay in the treatment of breast cancer, one of the most common cancers among women worldwide and the number one cause of death among US women under the age of fifty. Recent studies have suggested that chemotherapy regimens that omit anthracyclines have comparable effectiveness, yet spare patients the cardiac risks as well as, in some cases, the increased risk of AML. Oncologists are currently divided on this issue, and patient advocacy organizations are encouraging patients to investigate their options carefully in light of the controversy. These issues may, in time, spill over to other cancers now commonly treated with this highly effective, but also little toxic family of chemotherapy drugs.
Closing Remarks
The anthracycline antibiotic drugs are very effective for the treatment of various cancers especially for metastatic breast cancer, solid tumors, lymphomas, soft tissue sarcomas and acute myeloblastic leukemia’s. Unfortunately, due to possessing toxicological affects its usage was limited to some extent. But this problem was resolved by using liposomal anthracyclines, reducing the toxicity level and improving the effectiveness of the anthracyclines towards cancer treatment. In future, we can promote the use of these liposomal anthracycline drugs for early diagnosis of cancer by tagging the liposome drug with suitable radiotracers.
Acknowledgement
Authors are cordially thankful to Dr. Rashid Rasheed and Muhammad Zubair for useful discussion and providing technical assistance.
Compliance with Ethical Standards
Conflict of Interest
The authors declare that they have no conflict of interest.
Ethical Approval
This article does not contain any studies with human participants or animals performed by any of the author.
Sources of Funding
No funding was taken from any source to design this article.