Nutritional status has a strong impact on children’s survival as malnutrition and diseases are linked together synergistically2. There is evidence that shows that protein-calorie malnutrition contributes to increased susceptibility to infections in children and diarrheal infections can predispose them to malnutrition3, 4. Many risk factors have been identified for malnutrition in such age groups, such as inadequate diet, restriction of certain of food during illness (i.e. complementary feeding like potato, banana etc.), high illiteracy rate and the poor feeding practices of mothers3, 4.

332 mothers having children under five years of age were interviewed from clinics of a tertiary care Hospital during June to December (2013), through non-probability convenient sampling using a structured questionnaire. Univariate and multivariate analyses was performed on SPSS 19.

Study indicates that there is a need of right dietary awareness amongst mothers so their dietary practices during diarrheal infections can combat malnutrition in children.

Adequate nutrition is important during childhood for a healthy growth and proper nourishment of all essential systems of the body1. Nutritional status has a strong impact on children’s survival and healthy growth as malnutrition and diseases are linked together synergistically2. There is evidence that shows protein-calorie malnutrition contributes to increased susceptibility to infections and diarrhea being a common infection predisposes children under five years of age to malnutrition3, 4. Numerous risk factors have been identified for malnutrition of children, such as inadequate diet, restriction of certain of food during illness (i.e. complementary feeding like potato, banana etc.), unhygienic living environment, high illiteracy rate and the poor feeding practices of mothers3 ,4. Therefore Malnutrition resulting from insufficient diet may be aggravated by diarrheal infections5. According to the United Nations Children’s Fund (UNICEF), diarrhea is one of the leading cause of death in children under five years of age1. The World Health Organization (WHO) states that diarrhea accounts for 15% of all deaths in under five years of age5.

Approximately 10% of children in Pakistan do not survive to their sixth year of life and the major contributing factor to the high childhood morality in Pakistan is the prevalence of malnutrition, secondary to the diarrheal diseases. These high figures are the synergistic effect of inadequate dietary intake and diarrheal infections in children under five years of age1. Studies have shown a direct relationship between different causes i.e. unhygienic living conditions, inadequate diet given, withdrawal of certain foods during diarrheal illness etc. that relate towards development of malnutrition due to diarrheal diseases in children under five years of age7,8,9.

Diarrhea is a curable and treatable disease but the incorrect practices of mother’s regarding nutrition and diet during diarrheal diseases will ultimately lead to malnutrition in children under five years of age13.

The study was conducted in the Family medicine clinics of a tertiary care hospital where there was high influx of mothers with their children along with the diversity of different communities. An ERC approved pilot tested coded questionnaire was formulated through literature search (8, 10, 11, 14, 15 and WHO manual for diarrhea8.

Mothers were approached in the waiting area outside the clinics. Measures were taken to maintain the confidentiality of participants. Verbal and written consent was taken from the mothers who participated in the study. Mothers who full filled the inclusion criteria were enrolled and this study excluded mothers of children having chronic diseases. Information was taken from the past three months to reduce chances of recall bias. Questionnaire was filled in 10-15 minutes by the Principal Investigator by asking the mothers a set of questions that were coded to assess their feeding practices during diarrheal episodes. A dietary knowledge material on the diet during Diarrheal infections was provided to the mothers after filling the questionnaires.

Non-probability convenience sampling was used. The Sample size was calculated with WHO software (52) for sample size determination. Data was double entered and analyzed in SPSS version 19. Baseline information on demographics was analyzed using descriptive statistics. For continuous variables such as age mean and standard deviation was reported. The outcome variable i.e. Practices of mothers regarding diet in children under five years of age during diarrheal infections was calculated to fulfill the objectives. All the correct answers were calculated as percentages. A total score of 60% or above was marked as correct practice and below 60% as incorrect practice.

Logistic regression analysis was performed taking practices (Yes & No) as binary outcome variable. Univarate analysis was performed and the explanatory variables at the univariate level (p value < 0.25) was selected for inclusion in the multivariable model, and results were reported as unadjusted odds ratio with their 95% confidence interval.

A multivariable logistic regression analysis was performed to assess the independent effect of all demographic variables (age, working status, education, no. of children etc.) on the practices during diarrheal infections in the form of adjusted odds ratio and their 95% confidence interval. All of the analyses was two tailed, and p values of 0.05 or less were considered statistically significant.

A total of 332 mothers participated in the study (Demographic characteristics in table 1). Majority of the mothers were between ages of 26 to 30 years and majority them were housewives and had achieved higher education as shown in table 2. The study showed that 74% of the mothers had incorrect dietary practices during their child’s diarrheal episode as shown in figure 1.

Univariate analysis showed that a higher educational status of mother and her being at home had a strong association with her dietary practices during her child’s diarrheal episodes as mentioned in table 3. Multivariate analysis as shown in table 4 showed that mother’s higher educational status had a strong association with her correct diarrheal dietary practices. 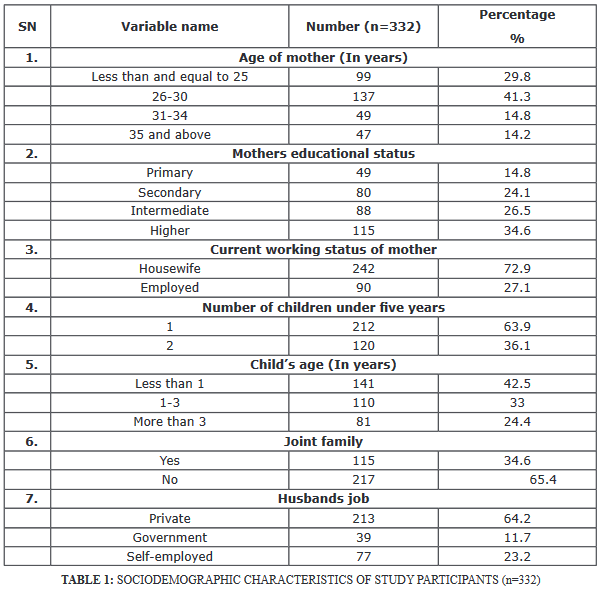 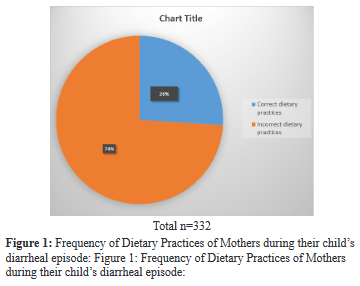 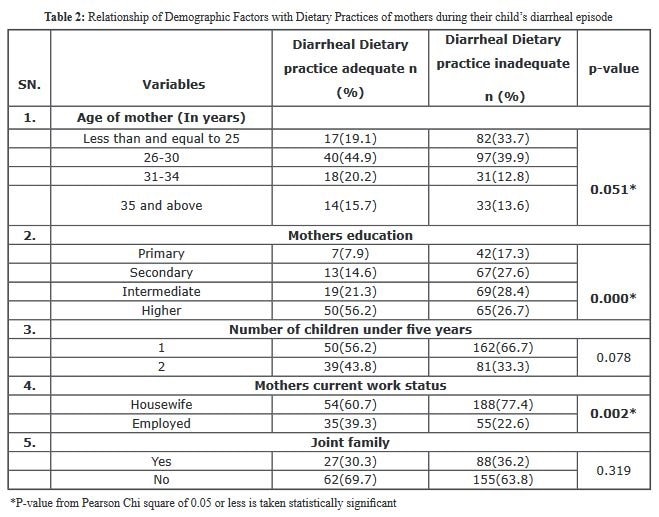 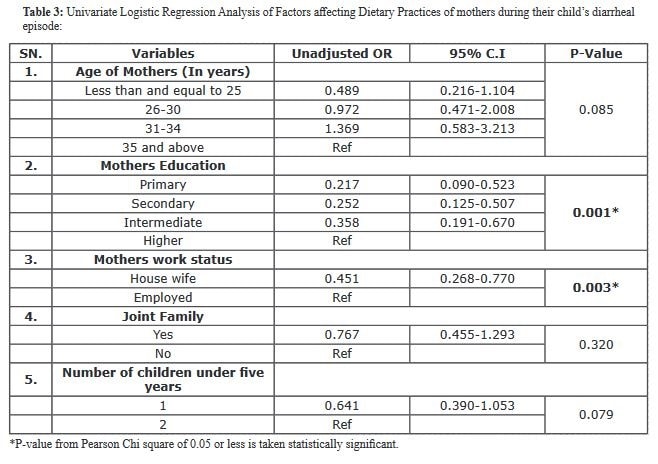 The study showed association between different socio-demographic factors and mothers dietary practices during diarrheal diseases in children under five years of age. Mothers play the most key feature in child’s nutritional status and his growth, their feeding practices has a direct impact on the child’s nutritional outcomes especially during diarrheal episode10. As it’s already evident from literature that one of the main cause of death in under five children are diarrheal illnesses3.

Our study showed that out of 332 mothers, 89 (26.80%) mothers had correct practice whereas almost 243 of then mothers had incorrect diarrheal dietary practices (73.2%) as mentioned in a study done on the beliefs of mother’s in diet to be given during diarrheal episodes in India showed that only 5% had reported about increasing diet during the illness15. A similar Iranian study showed that only 2.3% of the mothers had correct feeding practices during diarrheal episodes16. In our culture people believe that several food should be restricted during children’s illness; like, during diarrhea a child should not be given breast milk, or complementary feeds like potato, banana, etc. Literature shows that foods containing essential nutrients are withheld during illness, which ends up with child having malnutrition and poor growth parameters8, 18. The reasons for this gap could be the different cultural norms related to hot and cold foods in our society as cold food (i.e. rice, juices, banana etc.) is perceived to worsen symptoms. Family influence of elders could also affect family’s own traditional beliefs which restrict mothers from following correct practices and in turn they restrict diet that are healthy and nutritional for their children especially in the times of diarrheal episodes.

Regarding the factors affecting the dietary practices of mothers during diarrheal diseases mothers’ age seemed to play a vital role (p-value 0.05). Results showed that mothers between the ages 26 and 30 years had correct feeding practices comprising of almost 44.9%. These results are similar to a study done in the Primary care centers of Saudi Arabia that majority of the women practicing correct diet, included young mothers17. This could be due to the awareness through easy media access and reachable health facilities.

Amongst the other determinants mothers education also affected mothers feeding practices (p-value 0.000) as higher the mother’s education status was associated with the correct feeding practices almost 50% which was similar to the results from a study conducted in Ghana and Ethiopia showing mothers of higher educational background demonstrated more correct dietary practices in childcare as compared to mothers of low educational background18, 19.

Mother dietary practices in children’s diarrheal episodes need more awareness. By having more informed mother we can reduce the disease burden in children under five years.
The limitation of the study included limited sample size, and sample was drawn from only one location of Karachi, limiting external validity. This study can be a useful resource for primary care centers for educating the mothers and helping them realize that cultural beliefs and practices should not hinder a child’s right to proper nutrition. Future population based studies are recommended in order to validate the findings of this study.