The baseline surveillance on rabies in Sylhet was evaluated for the first time and in Rangpur division was checked for the second time in Bangladesh from June 2014 to January 2015. A semi-structured questionnaire was applied on total of 600 respondents including common people, school teachers, people’s representatives, political leaders, doctors, nurses and medical technicians from selected households. Of the respondents on average 91% know about rabies and regionally 93% in Sylhet division and 89% in Rangpur division. This survey highlighted education is a key of awareness about rabies and the level of educated people found higher in Sylhet (96.33%) than Rangpur (88.33%). Still the practice of traditional healer use comparatively higher in Rangpur than Sylhet, and which is 8.8% and 5.13% respectively. Almost 100% of the respondents of different categories seek treatment of rabies from the hospital. Majority of them know about the fatality of rabies and believed that rabies could be prevented by vaccination program. Given these findings, there is a clear need for specific educational initiatives involving the local population and the public health entities, with the primary aim of contributing to the prevention of rabies.

Rabies is an acute form of viral encephalomyelitis, which is almost invariably fatal, and affects mammals on all continents except Antarctica (Jackson, 2010). Transmission occurs through the inoculation of the virus, typically through bites, scratches or contact between skin lesions and the saliva of an infected animal (Kotait et al., 2009). Dog is the main reservoir of rabies virus (Kasempimolporn et al., 2008). All animal species may also be infected and serologic evidence of infection in bats has also been documented in Cambodia (Reynes et al. 2004). It is a common and lethal infectious disease for developing countries. More than 99% human death occurs due to rabies in the developing world (WHO 2004). It is responsible for more than 55 thousand cases of human rabies worldwide every year, mostly in Asia and Africa (Rupprecht et al., 2002).

The majority of rabies cases reported to the Centers for Disease Control and Prevention (CDC) each year occur in wild animals like raccoons, skunks, bats, and foxes (CDC 2011). World Health Organization estimates that between 30,000 and 70,000 people die worldwide of rabies each year (Knobel et al. 2005). In the United States, approximately 40,000 people receive post exposure treatment annually while there has been an average of three fatal cases of human rabies per year since 1980 (Messenger et al. 2002). Most of these deaths occur in developing countries because of inadequate control of rabies in domesticated animals, and about 30,000 death results in India alone (Sehgal et al. 1997, Singh et al. 2001). It is estimated rabies kill every year 2000–2500 people in Bangladesh which is worldwide third in rank after India and China in human aspects (Hossain et al., 2011; Hossain et al., 2012; Hossain et al., 2013). Rabies is not limited to human, in a passive surveillance in domestic animal populations reported, 3425 rabies deaths (Cattle: 2845; Goats: 547; Sheep: 13) (2010– 2012) in Bangladesh (Mondal and Yamage, 2014).

The mortality rate in both animals and humans may be several folds higher than reported since rabies is not a notifiable disease in Bangladesh. Limited data available in Bangladesh about rabies although few works have been done recently (Tenzin et al., 2015; Hossain et al., 2013), but previously baseline study on rabies conducted in Chittagong division (Gofur et al., 2011). In Bangladesh, domestic dogs act as the main source of rabies for both domestic animals and humans. As the application of post exposure rabies vaccine is globally known but still in Bangladesh people refuse to receive the vaccine properly and they used to on incomplete doses of rabies vaccine which consequences fatality. To get the knowledge and attitude of people in Sylhet and Rangpur division towards rabies this baseline survey has been documented which in terms will create opportunity for the precedents researchers and find a path to prevent this fatal viral disease.

A cross sectional study was carried out from June 2014 to January 2015 in selected areas of Sylhet and Rangpur divisions which are 350 kilometers and 264 kilometers away from the capital Dhaka, respectively by conducting face-to-face interviews using structured questionnaire. 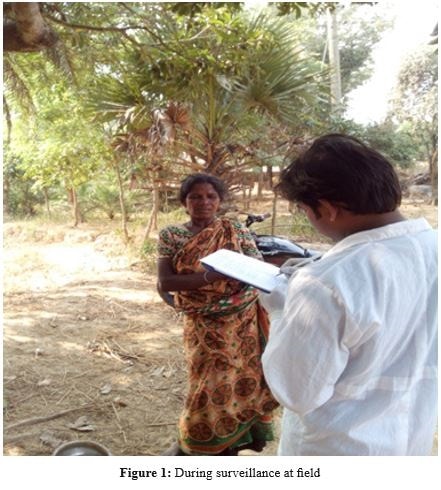 The study population included in this study common people, school teacher, people representative, political leader, doctor, nurse, and medical technician from selected households. The data were collected from Sylhet and Rangpur divisions. The age limit of the respondents was 16-85 years and about 600 respondents were studied. The households were chosen randomly. One person from each household was interviewed.

For collection of data a well-structured questionnaire developed and worked accordingly. During data collection the following general characteristics of a target population were included in the survey: age, sex, status in the family, level of education, prevention practice, treatment practice, control practice etc.

The collected survey data were severed in excel sheet and statistical analysis have been performed by using STATA (College Station, Texas 77845 USA) to find out if there was any significant relationship among the variables in respect to age, sex, occupation, housing, media facility, level of education. P value P≤0.05 was considered as level of significance

In this recent survey, the educational status of the respondents is given in (Table 01). From the surveyed 600 data it is clear that the literacy percentage of Sylhet division is comparatively higher than Rangpur division in every discipline of the education. Education creates awareness among the people and they can take remedy in proper dose without negligence which ultimately cures the disease fatality (Wallace et al., 2006). Of the participants highest 19% completed higher secondary certificate and lowest 4% completed post-graduation in Sylhet whereas highest 20.67% completed higher secondary certificate and lowest 1.67% post-graduation. Illiteracy rate is higher in Rangpur which is 11.67%. Comparatively primary education of Rangpur division participants are higher than Sylhet division shown in (Table 02). Education appeared to be the principal factor determining levels of knowledge on rabies, as shown in the previous studies in Asia and Africa (Tenzin et al., 2012; Ali et al., 2013; Gaudu et al., 2014; Sambo et al., 2014). 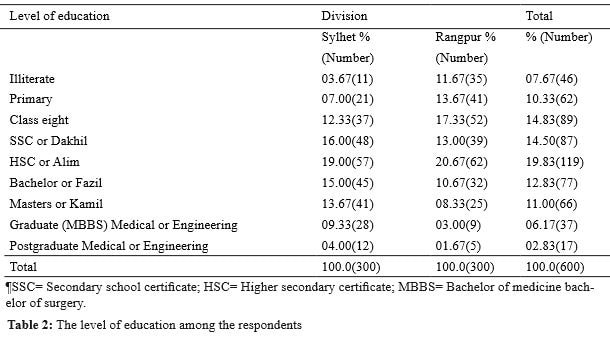 Rabies is transmitted through introduction of saliva by rabid dog bite. Different personnel have different views regarding this source of infection. People get information from different sources about rabies and the notion of the participants is summarized in (Table 03). When the education and awareness about rabies disseminate in the community people can get more information from their fellow. Due to the advancement of technology people gather information from different sources. Education has more access to information and that will help to understand the zoonosis of rabies (Gaudu et al., 2014). In every category people get information from TV, radio and health workers. In Sri Lanka 96% of the people would seek treatment from a doctor or a hospital after being bitten by dog; this high level of awareness might be due to the availability of information from multiple sources including government campaigns and mass media in addition to the free medical services available in government hospitals (Matibag et al. 2007).

Post exposure vaccination is mandatory after dog bite. It is still in practice use of traditional healer. In Rangpur, traditional healer use in common people comparatively higher than Sylhet and which is 8.8% and 5.13% respectively (Table 04). Every educated person conscious about the use of vaccine and they used to contact to doctor for post bite vaccine. 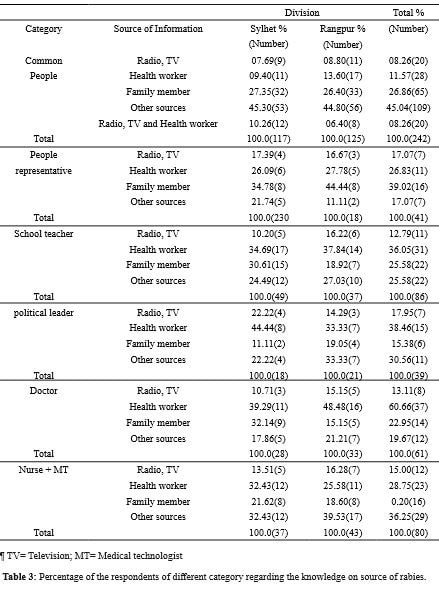 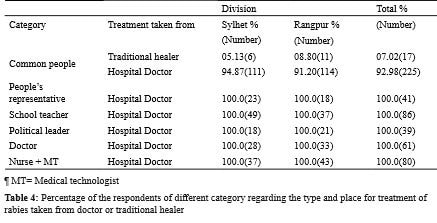 Aftermath of rabid dog bite is fatal if post exposure vaccine does not practice. About the fatality knowledge of common people is low. People representative, Political leader, doctor, nurse and medical technologist are quite sure about the fatality (i.e. death) of rabies (Table 05). In the rural areas near New Delhi, 84.0% of respondents were aware that dog bites might cause death (Agarwal and Reddaiah 2003). The long historical presence of rabies and its unfinished impact on modern life yet might be the reason for their conception about the rabies.

The present study indicated that there is still inadequate and insignificant knowledge of the respondents on rabies which is consistent of another finding (Moran et al., 2015). Participation of non-government organization is minute on stray dog control and it is about 7% and 6.33% respectively in Sylhet and Rangpur division. Therefore rabies control program must be continued with reliable data because lack of reliable data on dog population and their ecology and limited surveillance of rabies infection in dogs and humans also hamper control and prevention (Denduangboripant et al., 2005; Kongkaew et al., 2004). In the present study, almost all the participants believed that rabies could be prevented by vaccination programme. This kind of perception was high among educated and high income groups of people. The availability of the vaccine is also a factor for this motive development. 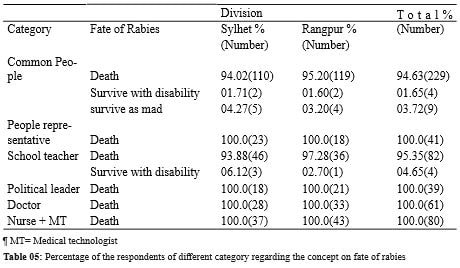 This study provides baseline perception on rabies. The objectives of this study may be achieved through the development of educational initiatives, primarily through the relevant public health authorities, and should be directed at both men and women of all ages and education levels. These recommendations are directly relevant to the reality of the Sylhet and Rangpur division, although they may provide a practical model for other regions of the world where there is a high risk of lethal outbreaks of human rabies. There is also a need for inter-agency collaborations and the one health approach engaging human health and veterinary professionals to control rabies in Bangladesh.