Biogenic nanoparticles are synthesized using biological organisms. The reason for choosing biological bodies is that these organisms can easily be cultured, with high intracellular metal uptake. Besides extracellular secretion of enzymes it offers simple downstream processing for product recovery with the ease of biomass handling. The metabolic activity of these microorganisms enables the extra cellular or intracellular synthesis of nanoparticles utilizing different mode of synthesis. Thus producing biogenic nanoparticles of different kinds.

Biogenic metallic nanoparticles have varied applications in various areas such as chemical engineering, tissue engineering, textile manufacturing, nanomedicine, clinical diagnostics (nanobots), electronics, organ implantations [1] biosensors [2], biological imaging [3], biomarkers, cell labeling etc[4,5] .Though there are many synthetic approaches being utilized to produce such entities but use of biological organisms as potential bio-nanofactories is a novel approach for the production of different nano sized particles [6].For example cadmium sulphide nanoparticle of size range of 20-200 nm was produced intracellularly in Klebsiella aerogenes bacterium[7]. Similarly gold and silver nano sized particles were amalgamated by Verticillium sp. and Fusarium oxysporum fungus [8] and silver nano crystals of definite size and discrete morphology by Pseudomonas stutzeri bacterium [9]. Silver nanoparticles formation by Vericillum in which the trapping and bioreduction of silver ions take place on the surface of the fungal cell [10, 11]. On the other hand fungus Usnea longissima is involved in the production of antimicrobial usnic acid nanoparticles that can be used for curing dermatophytic infections in humans by the mechanism of nanoemulsion[12].

Numerous examples of biosynthetic methods for nanoparticles synthesis are available in literature. These biosynthetic procedures can be categories’ as intracellular and extracellular depending on where these nanostructures are produced either within or outside the microbial cells respectively [13]. For example in case of extracellular synthesis, silver nanoparticle of size ranging from 16-40 nanometer with diameter of 27 nanometer was produced by the bacterium Pseudomonas strutzeri[14], magnetite (Fe3O4) or greigite (Fe3S4) nano crystals by magneto bacteria and the fabrication of siliceous material in diatoms[15].Several strains of Fusarium oxysporum were involved in extracellular fabrication of nanoparticles with the help of hydrogenase enzyme present in the fungal broth. This extracellular enzyme behaves as an electron shuttle in bioreduction with excellent redox properties thus capable of transforming metal ions to nanoparticles[16]. As it is evident that microorganism releases hydroquinones which enables metal ions reduction to their respective nanoparticles thus acting as reducing agents or electron shuttles[17].

But in case of intracellular nanoparticle synthesis the mechanism is quite different. In intracellular synthesis microorganism transport ions into the microbial cell with the help of an ion transportation system. For example bioreduction of ferric to ferrous is followed by the precipitation of amorphous oxide resulting in successive alteration forming magnetite nanoparticles [15]. Alternatively gold nano sized crystals were produced in human cancerous and non-cancerous cells [18], exhibiting distinct morphologies as confirmed by scanning microscopy. Therefore this property can be applied in cancer diagnostics. However alkalo thermophilic actinomycete or Thermomonospora sp allows the precipitation of gold nanoparticles outside their cells. Similarly the fungus Aspergillus fumigatus and Colletotrichum sp.is known to produce silver and gold nanocrystals extracellularly [19, 20].Not only microorganisms but plants can also be employed for nanoparticle synthesis that the extracellular fabrication of pure metallic gold and silver particles was achieved by the interaction between the Azadirachta indica (Neem) leaf broth with aqueous chloroauric or silver nitrate respectively[21].

Now a days, synthesis of silver nanoparticle have gained significant attraction because of their distinctive properties and various application like in surface-enhanced scattering[22], nucleotide sequencing[23] , antifungal and antibacterial activities [24,12]. Several synthetic methods are reported for the production of silver nano crystals such as heat decomposition in organic solvents [25], silver ions reduction in aqueous solutions in the presence or absence of stabilizers [26], photo-reduction and chemical reduction in reverse micelles [27,28], and synthetic reduction using radiations[29,30,31]etc. But most of these above mentioned routes are costly and involves the usage of poisonous and dangerous substances which pose serious biological and environmental risks. Therefore there is a necessity to develop an ecofriendly procedure that applies biological principles in nanoparticle formation i.e. biomimetic approach[32,33,14] such as the application of biological catalysts [34], plants extracts or plant biomass[35,36,37] and fungus[38] , for the fabrication of metallic nano crystals that do not employ the usage of harmful chemical substances. Biological systems such as bacteria, plants, fungi are recognized as suitable candidates for nanoparticles synthesis because of features like rapid growth rate, increased protein expression and bioaccumulation of metal nanoparticles by bioreduction etc[39, 40, 41]. For example it was reported that the treatment of AgNO3 with freeze-dried mycelium of Phoma sp. for 50 hours results in the formation of high concentration of silver nanocrystals of diameter 70nm within the mycelium of the fungus as shown by transmission electron microscopy (TEM). The fungal mycelium had absorbed approximately 13mg of silver as indicated by the adsorption assay[42].

Biological organisms for instance bacteria, fungi and plants make use of different mechanistic approaches for the assembly of diverse nanoparticles such as by means of bioreduction using different reducing or stabilizing agents that contributes towards the synthesis and stability of nanoparticles. Acidification, bioconjugation, metal ion capping, mineralization, enzymatic catalysis and bioreduction etc are familiar modes used for nanoparticles formation as described in Table 1. 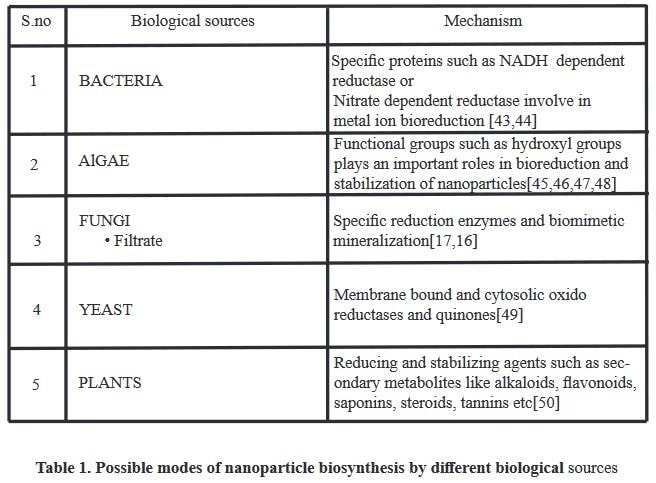 Nanotechnology is an advanced technology with impactful future perspectives. With the passage of time it is expected that nanotechnology will solve large scale production problems using nanoscale solutions. The use of biological organisms for the production of nanoparticles is a simple environmental friendly and cost effective process. But there are still a lot of hurdles which needs to be overcome. For example the influence of reducing agents in metal ion reduction which affects the morphological characteristics of nanoparticles, determination of the exact pathway involved in the bio fabrication of nanoparticles, optimization of growth parameters like temperature and light intensity etc, control of shape selectivity and size monodispersity of nanoparticles, devising of less costly recovery techniques to make synthesis process commercially practicable etc.