In this study, glutathione peroxidase activity (GPx) (EC:1.11.1.19) and amount of reduced glutathione (GSH) and oxidized glutathione disulfite was investigated in blood samples of who diagnosed with colon cancer individuals whose ages between 18-75. Erythrocyte were isolated immediately from patient and control groups after 3 ml of blood samples were taken. Amount of hemoglobin was determined in presence of cynanide with conversion of methemoglobin to cynomethemglobin at 540 nm by standart curve. GPx activity was determined by oxidation of NADPH at 340 nm spectrophotometrically. Amounts of GSH and GSSG were determined at 412 nm by using standard curve.
While GPx activity of stomach cancer patients (5,80 ± 1,40 U/gHb), contcentration of GSH (7,66 ± 1,19 nmol/gHb) and GSH/GSSG ratio (1,29 ± 0,46) significantly decreased comparing to control group (GPx: 10,52 ± 2,22 U/gHb, GSH: 11,43 ± 1,90 nmol/gHb, GSH/ GSSG: 3,86 ± 1,30), amount of GSSG of patient group (6,33 ± 1,18 nmol/gHb) significantly increased comparing to control group (3,09 ± 0,48 nmol/gHb). These results suggested that antioxidant/oxidant system balance abolished in patients who has stomach cancer.

Free radicals are result of any atom or molecule that has one or more unpaired electrons produced in vivo as a many physiological or pathological events1 . Any compound can form a free radical by giving an electron or by taking an additional electron. Free oxygen radicals are highly reactive atoms or molecules due to their unshared electrons. Produced free oxygen radicals are neutralized by antioxidant defense mechanisms2 . The precise balance between free radicals and the antioxidant defense system leads to the development of oxidative stress, which shifts in favor of oxidants. Decrease in the amount of GSH, an important role in defense of antioxidants, and inadequacy of GPx activity or formation of free radicals on the antioxidant capacity shifts the antioxidant / oxidant balance in the organism to the oxidant side. Therefore, the free radicals that are formed may cause harm to the living organism and cause various diseases. Cancer is one of these diseases3 . Oxidative damage of superoxide radicals and hydrogen peroxide on biomolecules, especially hydroxyl radicals, is thought to play an important role in the pathogenesis of many maling diseases such as gastric cancer4 . Free radicals damage done on DNA is especially important in cancer formation.The free radicals that react with the nucleotides of DNA cause differentiation in the DNA sequence, leading to the cells turning into cancer cells5 . DNA damage; Mutation and altered gene expression play a key role in the cancer process6-8.

One of the enzymes involved in GSH in the defense system against free radical damage and oxidative stress in organism is GPx. GPx reduces lipid hydroperoxides to alcohols and free H2 02 . When GPx performs this biochemical function, it uses GSH as cosubstrate, resulting in GSSG9 . It is known that GSH, the cosubstrate of GPx, has versatile physiological functions such as antioxidant defense, detoxification of electrophilic xenobiotics, modulation of redox-regulated signaling, cysteine storage and transport, regulation of cell proliferation, deoxyribonucleotide synthesis, regulation of immune response, regulation of leukotriene and prostaglandin metabolism4.

3 mL of venous blood samples were taken from the patient and control group of the subjects by using a tube containing K3-EDTA and transferred to the laboratory at the tube + 4 °C. Laboratory erythrocyte isolation process was started without loss of time. Blood samples were centrifuged at 2500 xg for 10 minutes at + 4 °C. After receiving the supernatant, 3 times the volume of isotonic NaCl solution was added to the shaped components remaining in the tube. The erythrocytes were slowly washed down and centrifuged again at 2500 xg for 10 minutes at + 4 °C. This process was repeated 3 times. Afterwards, erythrocytes were hemolyzed by freeze-thaw method by adding distilled water at a ratio of 1:5 v/v. After this process, hemolysate was centrifuged at 22000 xg for 60 minutes at + 4 ° C to allow separation of cell membranesThe resulting erythrocyte hemolysates were stored at -20 ° C in 1.5 ml eppendorf tubes for use in all analyzes11.

GPx activity in erythrocytes was measured by Paglia and Valentine method12. Hydrogen peroxide was used as the substrate in the measurement of enzyme activity and the oxidation of NADPH was detected spectrophotometrically at a wavelength of 340 nm. Results are given in gHb. The amount of total hemoglobin was determined in g/dl by cyanomethhemoglobin assay13.

Measurement of oxide and reducing glutathione

The measurement of glutathione in erythrocytes was made according to the principle described by Beutler, Duron and Kelly14. In the method, sulfhydryl groups form a chromogenic compound with DTNB reactivity, and the resulting yellow color is read against reactive bombardment at 412 nm. The calibration curve was drawn with 0.1, 0.2, 0.4, 0.8, 1.6, 3.2, 6.4 nmol / ml GSH solvates prepared from stock GSH solution (10 nmol/ml). The absorbance of the samples was quantitated by converting to the concentration using this curve.
Erythrocyte GSH values were expressed as nmol GSH / Hb ratio to hemoglobin values. The amount of oxidative glutathione was determined by measuring the amount of total GSH. The amount of GSSG was measured by differentiating the homogenate with 2-vinylpyridine before use.
The absorbance values obtained were converted to concentration values using the standard plot for total GSH.

The findings were analyzed by using variance analysis, Tukey test, Kuruskal-Wallis test, Man Whitney U test and correlation analysis. The level of error was taken as (p) 0.05.

Free oxygen radicals are produced in the organism as a result of many physiological or pathological events. The production and quantities of these radicals are kept under high control through cellular redox systems and antioxidants. However, oxidative stress occurs as a result of increased oxygen radicals and / or weakening of cellular redox balance. The decrease in the amount of GSH and GPx activity, which play an important role in defense of antioxidants, will lead to the increase of the reactive oxygen species in the organism and the formation of many diseases, especially cancer. The formation of free oxygen radicals at concentrations above the antioxidant defense capacity suggests that it may damage specific genes that control growth and differentiation of the cell and that it may grow faster and stimulate malignancy9,15-18.

In the case of oxidative stress, decrease in the amount of GSH and increase in the amount of GSSG is expected. Mutual change in GSH and GSSG concentrations is expressed as GSH / GSSG ratio, which is considered to be one of the signs of oxidative stress10,22. If cells are exposed to a high level of oxidative stress, GSSG accumulates and the ratio of GSH to GSSG decreases. Therefore, determining the GSH / GSSG ratio is an indication of oxidative stress in cells and tissues. In this study, we also found that the GSH / GSSG ratio in patients with gastric cancer was significantly lower than in healthy subjects (Table 2, Figure 4).
This reduction in GSH / GSSG ratio indicates that individuals with colon cancer are significantly exposed to oxidative stress. GPx, a glutathione dependent enzyme, plays a role in the poisoning of genotoxic and mutagenic electrophilic substances. The inability of GPx to perform this task or the formation of peroxides on its capacity weakens the detoxification power. As a result of this inability, increasing oxidants and genotoxic substances are involved in all stages of chemical carcinogenesis in particular9, 23-25. In many studies, it has been reported that GPx activity decreases significantly in general, compared with healthy individuals with cancerous tissue and stasis4, 11, 26, 27. In this study with patients with gastric cancer, we determined that patients had significantly lower erythrocyte GPx activity than GPx activity of healthy subjects (Table 2, Figure 1). Decreased GPx activity results in an increase in the effect of the oxidizing agents on erythrocyte. Decreased GPx activity in erythrocytes of individuals with cancer causes accumulation of H2 O2 and other oxygen radicals and increased oxidative stress. This leads to oxidation of the enzymes of erythrocyte structure, of other proteins and of unsaturated fatty acids in the erythrocyte membrane, resulting in impaired erythrocyte structure and function, and the tendency to hemolysis.

Determination of GSH / GSSG ratio indicates that the antioxidant capacity of redox equilibrium is favorable to GSH. GSH plays an important role as a cosubstrate for GPx, an enzyme responsible for removing H2 O2 and lipid hydroperoxides as well as removing free radicals directly from the media. This reduction in erythrocyte GSH levels in patients with gastric cancer also accounts for the decrease in GPx activity. GSH concentration is reduced due to smoking, eating habits, air pollution, reduced lifestyle and selenium content, GSH synthesis, or any enzyme involved in the pathway of GSSG regeneration. Decreased GSH concentration reduces GPx enzyme activity. In addition, a polymorphism that may lead to a decrease in enzyme activity in the genome coding for GPx also lowers the activity of the enzyme28, 29.

Our findings suggest that the enzymatic and nonenzymatic antioxidant defense mechanisms of stomach cancer patients are damaged or inefficient. For this reason, pathological conditions which may lead to increased production of free oxygen radicals in the organism should be avoided. It can also be investigated whether individuals have any genetic defects in the antioxidant defense system.

This study was supported by the CÜBAP (F-330). Cumhuriyet University, Faculty of Medicine, Scientific Research Assessment Board has been working with the permission of decision 20120-04/ 10. 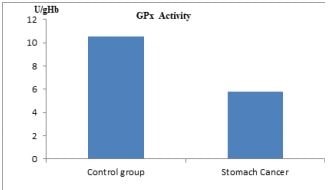 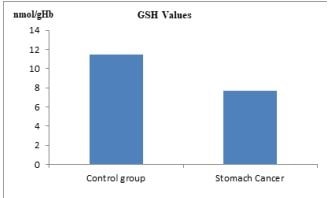 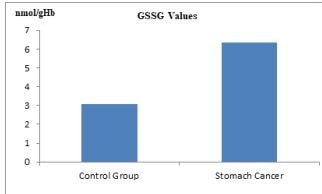 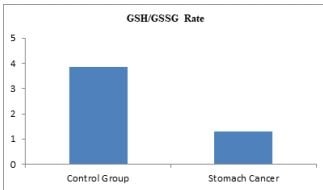 Table 1: Distribution of control and patient by mean age of groups and sex