This study focuses on investigation of milk fermentation process and the development of antioxidant activity measured by the lipid peroxidation assay. Raw cow milk was fermented using symbiosis of the cultures Streptococcus thermophilus and Lactobacillus delbrueckii ssp. bulgaricus, as well as the monocultures Lactobacillus casei, Lactobacillus acidophilus and Bifidobacterium bifidus. Inhibition of lipid peroxidation (LPI) was determined by a method based on developing of a dyed system using the thiobarbituric acid and iron ions. Titrable acidity (0 SH) was also assayed by Soxlet’s extractor. The results obtained from the investigation showed that the values of LPI were increased at the end of the investigation with all the strains of the cultures applied, ranging from 52,87%; 65,85%; 76,07% and 65,67%.. The maximum inhibition capacity of lipid peroxidation possessed Lactobacillus acidophilus, than Bifidobacterium bifidus. Milk fermented with Lactobacillus acidophilus also demonstrated the maximum degree of titrable acidity with a value of 40,06 оSH what proved that Lactobacillus acidophilus possessed the most proteolytic ability among the all strains used. This is of great importance for the production of yogurt where these two cultures are applying for, providing health benefits for the consumers.

The metabolism in living organisms is a continuous process of oxidation and reduction when some food components are oxidized with the releasing of energy, while some other components are reduced. During these complex processes, there is always a process of formation of potentially dangerous free radical species.

The oxidative stress reflects the internal balance between systemic manifestations of reactive oxygen species (ROS) and the ability of the biological system to detoxify these reactive intermediates or to remedy the damage from their activity. Disruption in the normal cell redox status may cause toxic effects through the production of peroxides and free radicals that damage all parts of the cell, including proteins, lipids and DNA. In humans, oxidative stress is thought that is involved in the development of various fatal diseases such as cancer [1], Parkinson’s disease, Alzheimer’s disease [2], atherosclerosis, death of heart muscle and degenerative processes of the myocardial [3].
Production of ROS represents a particular aspect of the destructive oxidative stress. These ROS include free radicals and peroxides.

Any free radicals in which the oxygen is turned on, can be referred to as reactive oxygen species (ROS). The radicals with oxygen as a central atom contain two unpaired electrons in the last electronic layer. When free radicals perform the “taking “ of an electron from a compound in the immediate vicinity, new radical occurs in its place. This is followed by tending of a newly formed radical to return to its neutral or “grounded” form, what makes it through the “seizure”- of another electron from the molecules being around it. Thus arises a chain reaction that can be infinite [4]. The chain electron transport which is located in the membrane of mitochondria in each cell uses oxygen to create energy from ATP. Oxygen acts as a terminal electron acceptor in the chain electron transport.

Antioxidant activity and the ability to perform the inhibition of lipid peroxidation are important because many diseases in humans begin just by insufficient activity of these processes in the body. Lack of antioxidant capacity in certain cells cause oxidative damage of the cell structure and its abnormal function what is called oxidative stress on the body. Therefore very important question arises of consuming functional foods that possess exactly the capabilities to perform an antioxidant function and inhibition of lipid peroxidation.

Oxygen reacts with many organic substrates forming hydroproxides and other oxidized compounds. This reaction mostly represents a chain reaction of production of free radicals and it undergoes several phases:initiation reaction, reaction of developing when more and more molecules are included in the reaction with oxygen and reaction of termination. These reactions are presented below:

The valence bonds in the structure A can be represented as a hybrid B with partial free radical at each end of the allyl system. The reaction of oxygen occurs at the last atom of C of the allyl system when different isomeric hydroperoxides are produced.
The most important process of the termination of secondary peroxide radicals at room temperatures is proposed by [6] including tetroxide intermediate and results in production of ketones, alcohols and oxygen.

There is evidence that the oxygen produced through the reaction (7) can be activated in its excited state (‘O2 ) [7].

Fermentation of milk extends milk durability, and gives a possibility to obtain functional food with acceptable and good taste. Fermentation is important in the production of dairy products because the bacteria used in this process to perform decomposition of the main components of milk (mainly lactose and proteins) and yields new components such as acids, free amino acids, peptides and peptones which have different health contribution to the body of man. Namely, the free amino acids and peptide sequences of amino acids have an antihypertensive effect [8], increasing the anti-oxidative capacity and inhibition of lipid peroxidation [9] achieving numerous benefits to human health.
The aim of this research was to monitor the dynamics of development of antioxidant activity and capacity to inhibit lipid peroxidation of milk fermented by different microbial cultures.

As was already mentioned in the text [10], a medium used for this survey was sterilized whole cow milk having the average chemical composition shown in Table 1. 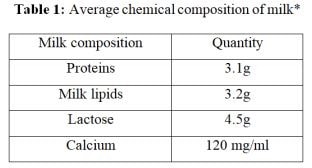 The milk was fermented with different microbial cultures: three monocultures (Lactobacillus casei, Lactobacillus acidophilus and Bifidobacterium bufidus).and a symbiosis of Streptococcus thermophilus and Lactobacilus delbrueckii ssp. Bulgaricus. Antioxidant activity (AOA) was expressed in (%) of the neutralization of free radical as was previously reported [10].
Inhibition of lipid peroxidation (LPI) was expressed in (%) of LPI. Besides AOA and LPI pH and titratable acidity was also monitored and statistical processed (ANOVA test) which are closely related to metabolic degradation of proteins present in milk due to bacterial cells, as was previously demonstrated [11]. Namely, how the pronounced proteolitic activity of the cultures is, the higher titrable acidity, what means a greater release of amino acids and thereby a positive correlation between AOA and LPI.
The parameters were monitored before fermentation, immediately after completion of the fermentation and at the first, third, 5 th, 10 th and 15th day after the fermentation process.

Before fermentation process milk was heated in a sterilized container at temperature of 35°C. Inoculation was done by direct seeding of culture in the required amount of milk with concentration of 0,01% w/v, and that represents the industry standard for fermented products manufacture. After seeding the contents were mixed 5 to 10 minutes with sterile blender for achieving better dispersion of the culture in the medium. Before use the edge of the bag where the cultures were sterilized with ethanol. Also the equipment for cutting and weighing container was sterilized with ethanol. Fermentation was performed in a sterile disposable container and thermal chamber at temperature of 40°C. The length of the fermentation was 4 hours using a starter culture consisted of the symbiosis of Streptococcus thermophilus and Lactobacillus delbruescii ssp. Bulgaricus, and 12 hours with samples fermented by Lactobacillus casei, L. Acidophilus and Bifidobacterium bifidus. The fermentation was completed when casein reaches its isoelectric point at 4,6 pH. After completing of the fermentation process the all samples were stored at refrigerator temperature of 4°C up to the next control measurement [11].

In Table 2 are presented the parameters of the sterilized whole milk which were analysed.

From the Chart 1 can be noticed, similar to АОА [10], drastically increasing of the LPI as result of milk fermentation with the all kinds of cultures investigated. From the point of view of the lowest and highest values of LPI, from the chart can be seen that the highest LPI had milk fermented by Lactobacillus acidophilus and the lowest value had milk fermented with Streptococcus thermophilus and Lactobacillus delbrueckii ssp. bulgaricus and Lactobacillus casei. The highest LPI value was achieved at the 15th day of the experiment (L. acidophilus) when the samples were kept at temperaturature of 4оС. The lowest value was noticed at the 10th day of the experiment. 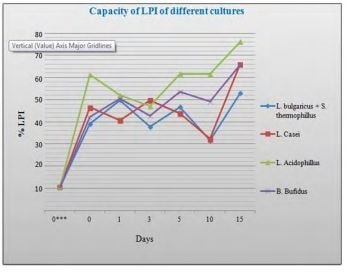 Inhibition of lipid peroxidation had a trend of steadily developing with small ups and downs between the control points. Immediately after completion of the fermentation, the observed values for LPI from 39,19% are noticed with the symbiosis of Streptococcus thermophilus and Lactobacillus delbrueckii ssp. bulgaricus, than 46,49 % with Lactobacillus casei, 61,30 % with Lactobacillus acidophilus and 42,15% with Bifidobacterium bifidus. LPI values at the end of the study showed an increase with the all cultures species, ranging from5 52,87%; 65,85%; 76,07% to 65,67%. The obtained results have clearly shown that the greatest capacity for inhibition of lipid peroxidation owned Lactobacillus acidophilus. It was followed by Bifidobacterium bifidus. This is of particular importance because in production of probiotic yoghurt these cultures are used. So, these results confirmed the positive effect of probiotics on the balance of all systems in the human body. According to a statistical data processing it was noticed that between the cultures species there was a significant statistical difference in LPI values at the level of p <0,05 what is shown in Table 3. 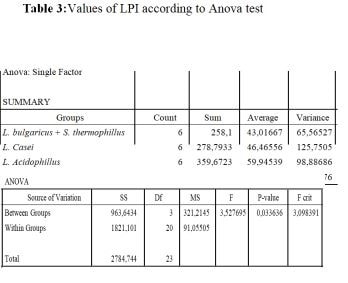 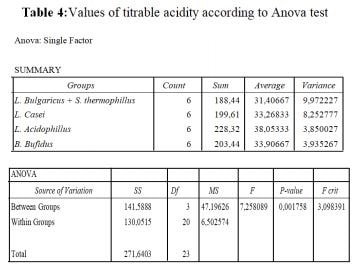 As a culture that showed the highest degree of titrable acidity confirming thus its proteolytic characteristics, Lactobacillus acidophilus had the lowest value of 34,8 oSH measured at the end of fermentation and the highest one of 40.06 oSH [10]. These data confirmed the highest AOA and LPI because Lactobacillus acidophilus possessed the greatest proteolytic ability among the all cultures investigated. The lowest values of titratable acidity during this research showed the symbiosis of Streptococcus thermophilus and Lactobacillus delbrueckii ssp. bulgaricus of 27,87оЅН at the end of the fermentation of a maximum one of 33,73 оЅН. This contributes to the fact why this symbiosis showed the lowest values for AOA and LPI.

In conclusion can be stated the following: 1.Fermentation of milk does much more than a simple extension of its life.
2.The highest capacity for LPI has shown milk fermented with Lactobacillus acidophilus.
3.The highest value of LPI was measured on the 15th day of keeping the fermented product and is 76,07%.
4.The lowest capacity of LPI has shown milk fermented with the symbiosis of Streptococcus thermophilus and Lactobacillus delbrueckii ssp. bulgaricus, with the average values of 43,01% and the lowest value of 31,61% which was measured on the 10th day.
5.The results of this research can justify the use of fermented dairy products as functional food and prevention of the oxidative stress and diseases related to.