Down syndrome is a common congenital disorder affecting 1/1000 live births. Newborns and children with Down syndrome may present with many hematological problems. In addition, benign and malignant abnormalities of the blood count and blood film, which may manifest at any age .[1]

Down syndrome is a chromosomal condition that is associated with intellectual disability, a characteristic facial appearance, and weak muscle tone (hypotonia)in infancy. All affected individuals experience cognitive delays, but the intellectual disability is usually mild to moderate.in addition to that newborn and children of down syndrome my develop many haematological abnormality varied from benign hematological abnormality of blood count and blood film, which can present at any age.

as child with DS growing up the risk of malignancy going higher in population-based and cancer registries and clinical trials suggest ~12-fold increased risk of acute leukaemia in children younger than 5 years of down syndrome such as myeloid leukaemia of down syndrome ( ML-DS) ,myelodysplasia and acute myeloid leukaemia .deaths from leukaemia, in part , accounts for excess mortality associated with down syndrome(8) many other non –malignant hematological abnormalities have been reported but their clinical important remain to be defined such as polycythemia due to cardiac disease , reduced number of B lymphocytes and thrombocytopenia (7)

benign hematology manifestation in down syndrome

There is various haematological abnormalities have been reported in neonate of down syndrome like .Thrombocytopenia , Thrombocytosis , Polycythemia ,and , Neutrophilia
in in an Intermountain Healthcare (IHC) hospital with a date of birth between January 1, 2001 and December 31, 2005.
CBCs done during the first week after birth on all neonates with Down syndrome ,
During this period, 145,522 live births were recorded at 18 hospitals. Down syndrome was recognized in 226 (1 in 644),
One hundred fifty-eight (70%) of these had one or more CBCs obtained before the seventh day (144 hr).

Neonates who did versus did not have a CBC in the first week had a similar gestational age, birth weight, percentage who were LGA and SGA, and length of stay
Neutrophilia was the most common hematological abnormality detected, with 80% of absolute neutrophil counts above the upper limit of normal for age.
The next most commonly detected abnormality was thrombocytopenia, with 66% of platelet counts <150,000/μl, and with 6% of counts <50,000/μl.
Polycythemia was the next most common hematological abnormality detected, with 33% of hematocrit values above 65% or hemoglobin concentrations above 22 g/dl.

Transit Abnormal Myelopoiesis (TAM) also called Transient myloprolifereative disorder which can be confined to newborns with trisomy 21, present in fetal life or in neonatal period and can be found in non-Down syndrome who have acquired trisomy 21 to hematopoietic cell(5) .similar disorder can be found with other syndrome like Noonan syndrome but the true TMA is strictly association with trisomy 21 .its potential to transform into an acute leukemia ,known as myeloid leukemia of down syndrome (ML- DS) .which is estimated to occur in ~20-30%of babies with TAM, the frequency of it is not known and it can be consider as leukemia or pre leukemic syndrome ( 6) 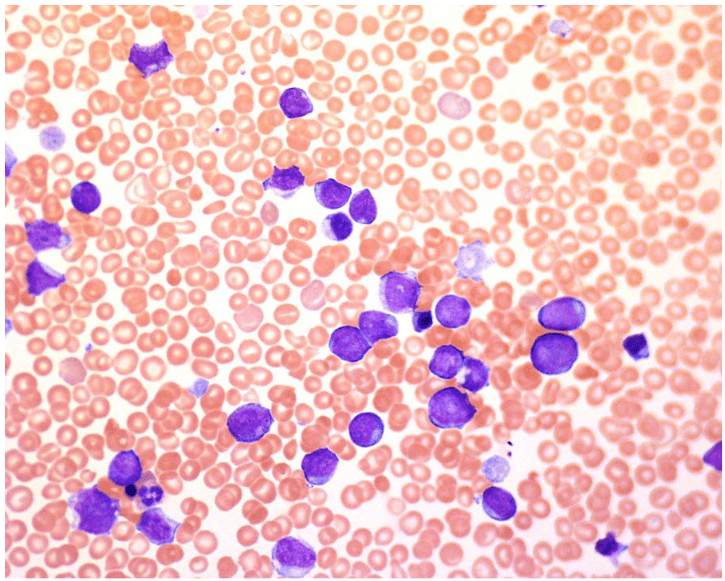 clinical finding of TAM is variable presentation (6) it mostly present after birth but during gestation it may present with hydropsfetalis, and anemia with hepatosplenomegaly and myocardial infiltration with blast cell which is carry poor prognosis if it compere with TAM presented after birth . TAM after birth ,can be diagnosed basis of circulating blast cell with or without mild leukocytosis ,10% of neonate with DS are said to developed TAM and 10 %of fetus with DS die in utero ,possibly due to TAM (8)

Clinically TAM is conventionally defined by combination of clinical features such as pericardial effusion ,Ascites ,pulmonary odemahepatosplenomegaly, hepatic fibrosis ,liver failure, obstructive jaundice andhematological feature such as leukocytosis ,persistence peripheral blood blast cell ,abnormal platelet count :often reduced or raised but may be normal Molecular genetic studies have shown that neonates with TAM have mutations in the N-terminal truncating mutations of key megakaryocyte transcription factor GATA1 (9) 10-15% of neonate with down syndrome diagnosed with different acquired mutation of GATA1 with <10% circulating blast may have silent haematological and clinical presentation , In most of cases of TAM and silent TAM, the GATA1 mutant clone goes into complete and permanent remission without the need for treatment(10) .

10–20 % of neonates with TAM and silent TAM subsequently develop ML-DS in the first 5 years of life when persistent GATA1 mutant cells acquire additional oncogenic mutations, most often in cohesin or epigenetic regulator genes( 10)

in patients with a sever TAM ,the main cause of death in early life are progressive hepatic fibrosis,cardio pulmonary failure ,and disseminated intravasculer coagulation and that may related to blast of visceral infiltration .(21)

As TAM blasts appear to be sensitive to Cytarabine [11]The Berlin- Frankfurt-Münster and s recommended treatment with Cytarabine with dose of (0.5–1.5 mg/kg for 3–12 days) subcutaneously or intravenously and in COG group for 7 days . Although TAM resolves in the majority of DS infants, 20-30 % may developed ML-DS 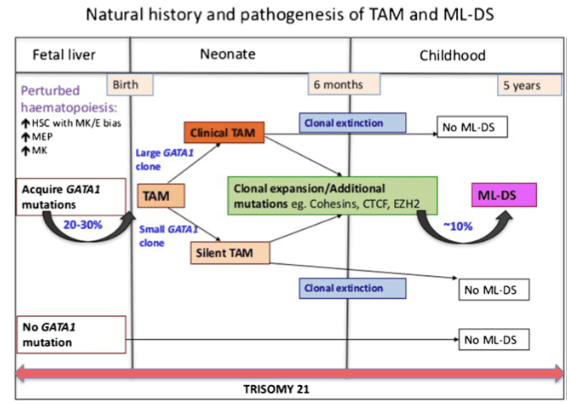 Figure 1:  Natural history and pathogenesis of TAM and ML-DS. Schematic representation of molecular, biological and clinical data, indicating that transient abnormal myelopoiesis (TAM) and myeloid leukaemia of down syndrome(ML-DS) are initiated before birth whwen fetal liver hematopoietic stem and progenitor cells(HSPC) triomic for chromosome 21 demonstratrte perturbed haematapoiesis with an expansion of megakaryocyte-crythroid progenitors (MEP) and megakaryocytes. these cells subsequently acquire N-terminal truncaating GATA1 mutations ressulting in TAM in late fetal or early neonatal life. Although most cases of TAM spontaneously and permanentaly remit(~90%)by the age of 6 months, in ~10% of cases, additional genetic/epigenetic events lead to further clonal expansion resulting in ML-DS before the age of 5years.

ML-DS is classified as subtype of AML in WHO classification its present in the first 2y and rare after 4 y of age and usually proceed neonatal TAM (12-13) that may be because of inappropriate diagnostic test for TAM in early life GATA1 mutations are found neonates with ML-DS even in the absence of an antecedent history of TAM( 14)ML-DS presented with progressive pancytopenia with low percentage of circulating blasts for many months before the development of ML-DS (12-15-16) . bone marrow aspiration is essential of the diagnosis as the circulating blast is low and the aspiration often associated with dry tap secondary to marked bone marrow fibrosis and bone marrow biopsy is necessary to confirm ML-DS(10) the blast cell similar to those in TAM with a typical megakaryoblatic morphology and co-operation of stem cell marker (CD34,CD117), MYLOID (CD33), megakaryocytic (CD42b and CD41) and erythroid markers (CD36 and glycophorinA) as well as CD7 (17-18)

the cytogenattic differences between DS and non-DS AML including absence of taranslocation t(1:22) ,and instead ,the presence of trisomies involving chromosomes 8 and 1, as well as monosomy 7 . (19-20) the conventional treatment oF ML-DS has been associated with excessive treatment mortality ,cardiac toxicity due to anthracyclines and serious infections( 21) Several collaborative study groups have adapted their standard AML protocol for ML-DS by reducing the dose of drugs (Table 1)( 21) 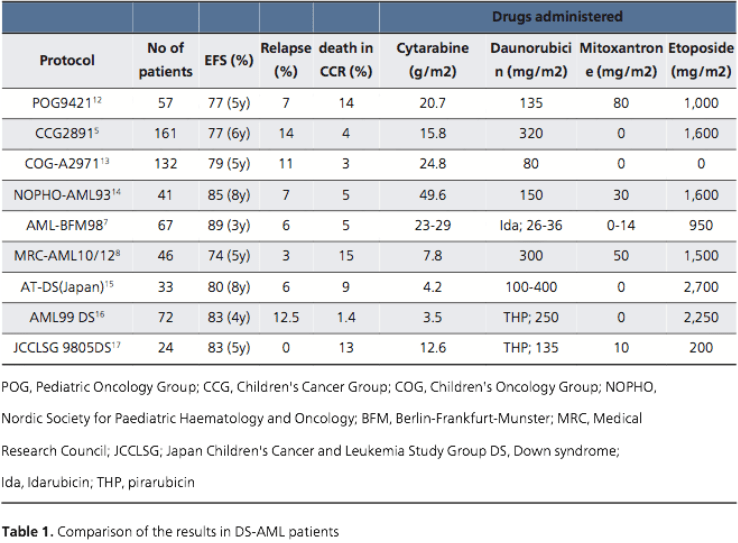 The prognostic factors and outcome of DS-ALL patients treated in contemporary protocols are uncertain.

Children with DS-ALL have an inferior outcome compared with non-DS patients because of both higher treatment-related mortality (TRM) and a higher relapse rate.(23)