Radha108 nano peptides stimulate the Cytotoxic T-cells of the innate immune system to naturally produce bio similars like cytokines (interleukins and interferons). Radha108 is proven to increase the production of these cytokines by 5 folds. These nano peptides get absorbed in the blood through buccal mucosa and have potential of crossing the blood brain barrier (BBB).
Radha108 acts on pituitary gland that in turn promotes the differentiation of B cells, maturation of macrophages, monocytes and stimulates the production of cytokines IL-1 to IL-11, TNF-α, INF–γ. It also helps in the maturation of immature thymocytes either into helper or suppressor T cells that help in priming body’s immune system against infections and immune disorders like asthma, allergy, upper respiratory tract infection (URTI), carcinomas and type 2 diabetes thereby saving huge amount of resources and money that are spent in treating such ailments with little or no efficacy.

Today, however, many factors contribute to the general weakening of the body’s defences. Antibiotics have begun to fail due to multidrug resistance being developed over the period of time by species of microorganisms to multiple antimicrobial drugs. Due to the failure of government control of health codes, deterioration of water quality, and lack of adequate quarantine measures following frequent international travel, diseases now spread more easily than ever before. Fortunately, recent research has uncovered a natural agent, which can increase our ability to fight disease and improve the quality of life for many people.

Radha 108 nano peptides extracted from mammalian colostrum (first milk) stimulates our body’s own immune system as a broad- spectrum anti-viral and a new generation immunomodulator to fight against several diseases and prevents all communicable infections. It is a natural product manufactured by nano-biotechnology patented proprietary ultra-nano filtration processes from bovine colostrum.

The innovation of Radha 108 in the field of immunotherapy is quiet revolutionary in therapeutic and preventive medicine. It is a form of treatment that uses different aspects of the immune system, its cells and molecules, and its various stratagems to tip the balance in favour as our body battles to maintain a healthy state. Almost all individuals, healthy or diseased, with a few exceptions have benefited from regular Radha 108 supplementation. The use of Radha 108 did not cause any side effects even when given in high doses, exceeding the normal doses for prolonged periods. It has been shown to be beneficial in people with specific ailments as well.

Numerous studies have shown the effectiveness of Radha 108 in eliminating or alleviating symptoms of herpes, chronic fatigue syndrome, and viral infections including Epstein Barr, hepatitis, secondary infections due to AIDS, Candida, cancer and many other diseases and infections. Studies have also shown that continued use provides the greatest benefit, with maximum immune activity occurring 24 to 48 hours after taking the first dose. The need for Radha 108 for better health stems from the growing awareness that prevention is the best cure. With the increasing risks of antibiotic resistance and significant health threats, such as severe acute respiratory syndrome (SARS), the medical community increasingly turns to the inherent concept of immunization using vaccinations.

Radha 108 is a kin to a vaccine but rather than exposing the patient’s immune system to the actual disease or a deactivated version of the same, Radha 108 exposes the patient’s immune system to the memory of a health threat, whether foreign or native, and the knowledge of how to best respond to protect itself. In view of proven global safety and efficacy, the product is now ready for a global launch with the product having been patented in several countries like the United States, Africa, Canada and Asia (Singapore and India).The background of the invention

Radha 108 proteins directly support the NK cells of the immune system. NK cells provide the front line of defense specially equipped to locate and kill disease cells. NK cells attach to the surfaces of foreign substances or their outer cell wall, and inject a chemical “grenade” (granule) into the interior. Once inside, the granules explode and destroy the foreign invader within five minutes.

The NK cell itself remains intact and moves on to destroy the next immune attacker. Many doctors and clinicians are finding Radha 108 helpful in promoting NK function and activity as well as supporting a healthy immune system for all patients. The immune system plays a great role in the quality of our health. Strong, active and optimally functioning NK cells promote optimal health and deter foreign substances from affecting immune function. 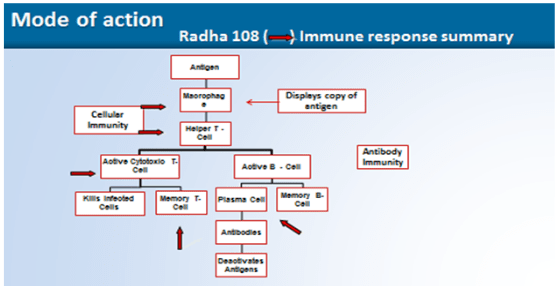 Radha 108 acts as cytokine modulator. Cytokines are a diverse group of soluble proteins and peptides which act as humoral regulators at nano to picomolar concentrations and which, either under normal or pathological conditions, modulate the functional activities of individual cells and tissues. These proteins also mediate interactions between cells directly and regulate processes taking place in the extracellular environment. The cytokines interleukin 1 and 6, interferon-gamma and lymphokines have been shown to stimulate the lymph glands and are thought to be highly effective antiviral immune substances.

Interleukins regulate the duration and intensity of the immune response and are responsible for cell to cell communication, boost T-cell activity and the production of immunoglobulins. The cytokine IFN-beta is involved in the regulation of unspecific humoral immune responses and immune responses against viral infections.

Extensive preclinical studies have documented a direct cytostatic and cytotoxic effect of the cytokine TNF-alpha against subcutaneous human xenografts and lymph node metastases in mice as well as a variety of immunomodulatory effects on various immune effector cells, including neutrophils, macrophages, and T-cells. Following is a description of some of the biological activities of the IFN-beta and TNF-alpha cytokines:
IFN-beta (beta-interferon)

It is a glycoprotein with 20,000MW consisting of 166 amino acids. It is also known as fibroblast interferon, Type-1 interferon, pH2- stable interferon, and R1-GI factor. IFN-beta is produced mainly by fibroblasts and some epithelial cell types. IFN-beta is involved in the regulation of unspecific humoral immune responses and immune responses against viral infections. IFN-beta increases the expression of HLA class I antigens and blocks the expression of HLA class II antigens stimulated by IFN-gamma. IFN-beta stimulates the activity of NK-cells thereby activating antibody-dependent cytotoxicity.

The activity of T suppressor cells is also stimulated by IFN-beta. IFN-beta enhances the synthesis of the low affinity IgE receptor CD23. In activated monocytes, IFN-beta induces the synthesis of neopterin. It also enhances serum concentrations of beta-2-microglobulin. IFN-beta selectively inhibits the expression of some mitochondrial genes. IFN-beta shows anti proliferative activity against a number of cell lines established from solid tumors.

IFN-beta can be used for topic treatment of condylomata acuminata. It is also suitable for the prophylactic use following surgical removal of large condylomas. Some studies suggest that IFN-beta tends to prevent disease activity in patients with multiple sclerosis. IFN-beta has been used in the treatment of chronic active hepatitis B and appears to be most promising if the disease has not lasted longer than 5 years. The antiviral activity of IFN-beta is demonstrated also in the treatment of severe childhood viral encephalitis.

IFN-beta is a lipophilic molecule that should be particularly useful for local tumor therapy due to its specific pharmacokinetics. It is hardly removed from the tumor tissues after intraregional administration and hence also shows little systemic side effects. Head and neck squamous carcinomas, mammary and cervical carcinomas, and also malignant melanomas respond well to treatment with IFN-beta.

IFN-beta also appears to be very promising for the adjuvant therapy of malignant melanomas with a high potential for metastasis. Response rates have been reported to be improved by combining IFN-beta with antineoplastic agents or other cytokines. In many instances a combination of the various interferons has been found to cause synergistic effects. The antiviral/anti proliferative/antitumor properties of IFN-beta are potentiated by febrile temperatures.

TNF-alpha is a glycoprotein with a 17,000MW consisting of 157 amino acids. It has immuno-modulating effects on various immune effector cells. TNF-alpha shows a wide spectrum of biological activities. It causes cytolysis and cytostasis of many tumor cell lines in vitro. Sensitive cells die within hours after exposure to picomolar concentrations of the factor and this involves, at least in part, mitochondria-derived second messenger molecules serving as common mediators of TNF cytotoxic and gene-regulatory signaling pathways.

The factor induces hemorrhagic necrosis of transplanted tumors. Within hours after injection TNF-alpha leads to the destruction of small blood vessels within malignant tumors. The factor also enhances phagocytosis and cytotoxicity in neutrophilic granulocytes and also modulates the expression of many other proteins. Radha 108 promotes the production of these cytokines (IFN beta and TNF-alpha).

Carried out as per the International Conference on Harmonization (ICH) guideline at Nation Institute of Nutrition, Hyderabad.

Phase I clinical trial: Ohio, USA:
The trial was conducted to evaluate the safety of Radha 108 Oral Spray on 12 HIV patients for a period of 30 days.

A t-Trial was conducted on 30 patients with HIV/AIDS, who received a 90 day treatment with Radha 108 Oral Spray with an objective to demonstrate efficacy and safety under clinical conditions.

A t-Trial was conducted in 60 patients with HIV/AIDS, where patients received a 12 month treatment with Radha 108 Oral Spray with an objective to study the efficacy and safety under clinical conditions.

18 % of the total study cases had diarrhoea at basal and after treatment from 5th week onwards all the patients had relief from diar-rhea.(Figure 1)

Figure 1:   Reduction in number of patients with diarrhoea during the 11 weeks trial treatment with Radha 108.

Fever was reported by 24 % of total study cases at basal and from 7th week onwards not a single patient had fever with significant fall started 4th week onwards. (Figure 2)

Figure 3:   Reduction in number of patients with cough during 11 weeks trial treatment with Radha 108 88 % of the total study cases had symptoms of Fatigue/Malaise at baseline. After treatment of Radha 108 at the end of 2nd week proportion of symptoms of fatigue had a significant fall from baseline. After 6th week onwards only one or two patients had Fatigue/Malaise (Figure 4).

Figure 4:   Reduction in number of patients with Fatigue/Malaise during 11 weeks trial treatment with Radha 108

51 patients (100%) had diarrhea at baseline and all patients had relief from diarrhoea from 3rd week onwards with the treatment of Radha 108. (Figure 6)

Figure 6:    Reduction in number of patients with diarrhoea during the 12 weeks trial treatment with Radha 108 100 % of the total study cases had Nausea at baseline and all patients had relief from Nausea from 3rd Week onwards. (Figure 7)

Figure 7:   Reduction in number of patients with nausea during the 12 weeks trial treatment with Radha 108

100 % of the total study cases had vomiting at baseline and all the patients had relief from vomiting after treatment from 3rd Week onwards. (Figure 8)

Figure 8:   Reduction in number of patients with vomiting during the 12 weeks trial treatment with Radha 108 100 % of the total study cases had fever at baseline and all the patients had relief from fever from 3rd week onwards. (Figure 9)

Figure 9:   Reduction in number of patients with fever during the 12 weeks trial treatment with Radha 108 100 % of the total study cases had cough at baseline and all the patients had relief from cough from 3rd week onwards. (Figure 10)

Figure 11:   Reduction in number of patients with fatigue/malaise during the 12 weeks trial treatment with Radha 108

While there was a significant improvement in CD8 count with 75% of patients showing an increase in CD8 counts and the average difference in CD8 count from baseline to the week-12 was found to be 102.69 ± 267.44. This effect was statistically significant (p < 0.05). (Figure 12b)

Figure 12a:    Comparison of the number of patients in CD4 cell count ranges at baseline and end of treatment measurements.

Figure 12b:   Comparison of the number of patients in CD8 cell count ranges at baseline and end of treatment measurements. 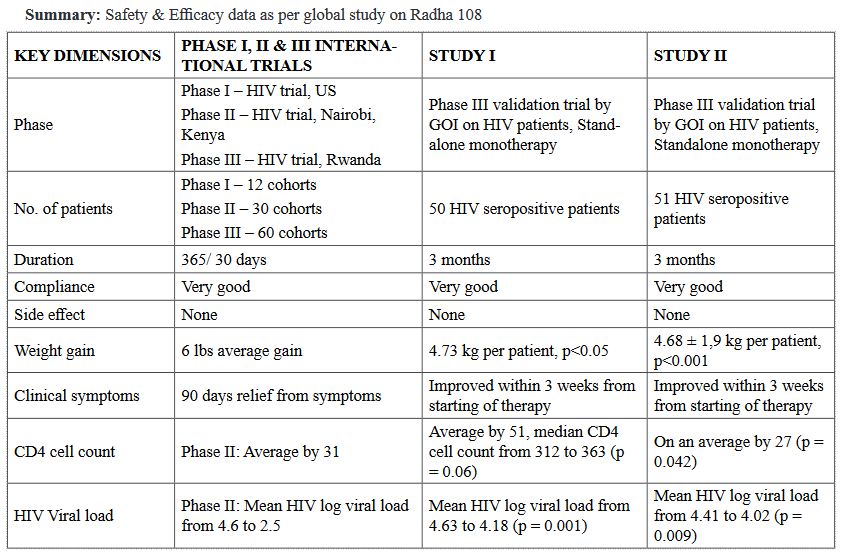