This research aims to create a peak run-off mode based on land use existing and masterplan Sentul City, an urban area. To determine the peak run-off by rational method, the study uses the formulation as follows: Q = 0.2778.C.I.A, in which Q is the peak run-off, C is the run-off coefficient of area, I is the average rain rate intensity, and A is the area of study. For recognizing the existing of land use, the researcher used image analysis SPOT-6 (2017) by supervised classification. It estimated gamma distribution parameter through maximum likelihood method by using software QGIS 2.8, SAGA GIS, dan Arc-GIS 10.4.1. According to the analysis, the study result shows the land use existing peak run-off coefficient value and masterplan are 0.40 and 0.61, respectively, in which the difference is 0.21. The peak run-off increase is 25.32 m3/second due to changes in land use, so it must be anticipated so as not to negatively impact the environment, social, and economy such as: aggravating and expanding flooding areas, causing water shortages in the dry season, increasing erosion and sedimentation, etc.

Water supply potential in Sentul City (SC) area depends on biophysic condition including land use or land cover, topography, hydrology, climatology, living things, soil sorts, vegetations, animals, etc. SC, an independent city in Bogor Regency, is developed by PT Sentul City Tbk. By applying the green development principle, SC is expanded through city parameter respond. The concept of ecocity is applied to both landscapes and establishments. This area is established as housing area, trade area, official area, industrial area, tourism area, and specific facility (commercials). Since geohydrology condition of SC, it becomes a water-lackness area. It is impossible to maintain water as the impact of loamy soil characteristic which dominates. As stated in the masterplan, the development concept of SC area divides SC area into two areas, including establishment area and coverage, and conservation area. The conservation area is arranged as park forest, playground (Masterplan, 2011). SC has a commitment to maintain the balance of built-up area and open area. According to the masterplan and land use existing, the aim of this research is to create a peak run-off model in the urban area SC.

Geographically SC is located on coordinate 06°33΄55΄΄- 06°37΄45´´LS and 106°50´20´´- 106°57´10´´ BT. SC which area is 2,465 ha is located on the border area at value 3,001.4 ha (Masterplan, 2011). But, in this study the researcher conducted a spatial analysis at area 2,905.33 ha which was appropriate with area border line in vector form given by planner side. As governmental administration, SC is located on 8 Villages and 2 Subdistricts, including Cipambuan Village, Babakan Madang Village, Citaringgul Village, Bojong Koneng Village, Sumur Batu Village, Cijayanti Village, Kadumanggu Village, and Cadas Ngampar Village. The subdistricts are Babakan Madang Subdistrict and Sukaraja Subdistrict, Bogor Regency. Settlement area SC has the nearest direct access, including Bogor outer ring road and Jagorawi road (Jakarta-Bogor). Other access toward the area is through Bogor Baru housing toward Cimahpar Village, then to Cijayanti Village by paved road.

Determine the sort of land use

For determining the sort of existing land use or land cover in the area of study, the researcher conducted two steps. First step, the georeferenced process was applied to image SPOT-6 to reach the exact geographical position. The research used the coordinate reference system, which mentioned as Universal Transverse Mercator (UTM). Based on UTM zone division, the SC area was located on UTM Zone 48S. Therefore, the map was projected to WGS84/UTM Zone 48S/EPSG:32748. Second step, the supervised classification was conducted to image map by maximum likelihood classification method to make a land closure map of study area. Then, the ground check was conducted to recognize directly the closure land of the urban area SC. The accuracy of land closure analysis result was evaluated by overall accuracy and kappa accuracy.

To determine the peak run-off in SC area (Qp_SC), this research used rational method, which formulation was presented as followed (Schwab et al. 1981):

The rational method is generally used for area of study with small scope. Meanwhile, for large scope, it needs to use rational modification method (Theodore G, Cleveland, et al. 2011)

According to land cover classification in the image SPOT 2017 by land use map year 2015, the study results land use in SC as presented in Table 1. 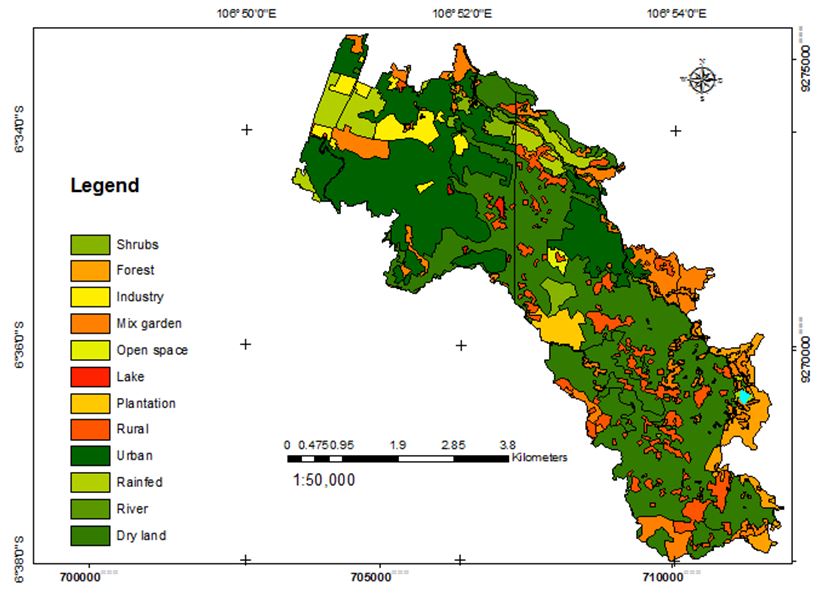 The data analysis result shows land use existing condition in the study consists of 12 classes of main land cover, and most lands are moors at value 41.77% followed by urban settlement 24.48% and mixed garden 10.23%, inland freshwater 0.22% and open area 0.33% are the smallest area in the research area. The existing land use in SC area is showed by Figure 1.

Table 2. Land Use Existing and Run-off Coefficient in SC 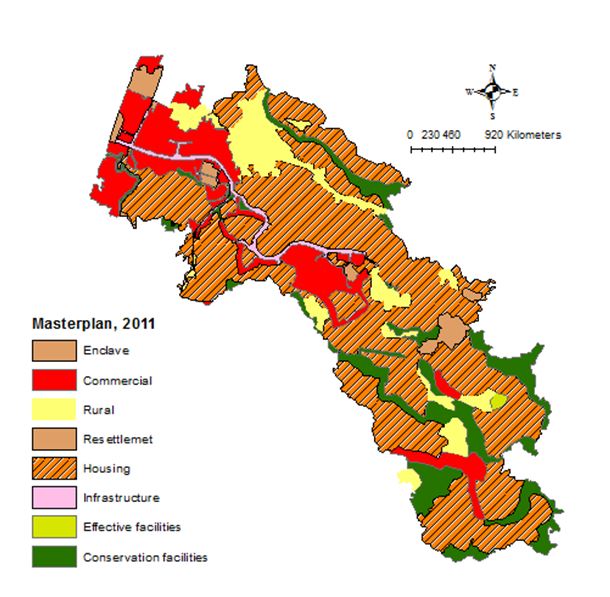 This coefficient also depends on the nature and condition of the soil. The infiltration rate falls on continuous rain and is also affected by previous water saturation conditions. Other factors that also affect the value of C are groundwater, the degree of soil density, soil porosity and depressed deposits. The following are the C values for various soil types and land uses (McGueen 1989 in Suripin 2003): The proportion of green open room in city area is minimum 30% of city area. Thereof, the settlement of SC has fulfiled the requirements of green open room (Barus B., and Wiradisastra U.S. 2000). The land use in the cluster BGH is classified into settlement area, facility, RTH, and vacant plots. Land Use Masterplan is showed in Figure 2.

The rain intensity is calculated by mm (millimetre) unite, which is the height of water accomodated in area 1 m x 1 m or 1 squared metre (m2). Accordingly, rain intensity 1 mm is the amount of water falling from the sky as much 1 mm x 1m x 1m or 0.001 m3 or 1 dm3, identic with 1 liter.

From that data, the average rain intensity value for 10 years, is calculated by equation as follows:

In general, the value of the existing runoff coefficient for land use 2017 is 0.40 and the master plan is 0.61. As a result of changes in land use based on existing land use on the master plan (2017 - 2050) there is a change in runoff coefficient of 0.21. Changes in runoff coefficient of 0.21 will affect the amount of runoff peak, with peak run-off value is 25.32 m3/second due to changes in land use, so it must be anticipated so as not to negatively impact the environment, social, and economy such as: aggravating and expanding flooding areas, causing water shortages in the dry season, increasing erosion and sedimentation, etc.

An increase in peak runoff of 25.26 m3/second due to changes in land use, so it must be anticipated so as not to negatively impact the environment, social, and economy such as: aggravating and expanding the area of flooding, water shortages in the dry season, increasing erosion and sedimentation, and etc. Recommendation Changes in land use result in changes in the value of peak runoff. Peak runoff will increase with decreasing green open space and or increasing open land (no vegetation).

Efforts to reduce runoff in SC can be done including planting vegetation (adding green open space) to increase water infiltration into the soil. Besides this, the low availability of green open space can also reduce the carrying capacity of the biotic environment in overcoming the effects of human (anthropogenic) activities in urban areas (Sari, Wiryanto, and Setyono. 2019) as in SC. Other efforts to reduce runoff can be carried out by collecting water by the construction of artificial lakes, infiltration wells, absorption biopori holes, smart tanks and utilization of river water