Spirulina is a blue-green algae. There are three predominant species in India namely Spirulina platensis, Spirulina fusiformis and Spirulina maxima. All of them are profusely enriched with nutrients. As a consequence, Spirulina formulations are made available in the market for use. Unique attributes of Spirulina are autotrophic and alkallophyletic and hence the energy requirements to maintain its culture at home are almost nullified. The sunlight that we obtain at our homes is more than adequate for its growth and replication. Mineral replenishment only needs to be supplemented. Yet, another important ingredient in the culture medium is pH. Spirulina prefers to grow in extreme alkaline medium under sunlight that restrains from most of the facultative bacteria and fungi which otherwise contaminate the culture medium. Therefore, little sophistication is required for its maintenance at domestic premises. The medium composition tried in our lab led to the profuse growth of the culture as indicated through the intensity of the green colour in the wider plastic tubs and obtained biomass was processed for the preparation of dried flakes.
Methods: A screening test for mild cognitive impairment: Montreal Cognitive Assessment (MoCA test), measurement of body composition by an inner scan monitor, and stress level tests were performed by measuring α-amylase levels in the saliva from the sublingual gland. For statistical evaluation of scores before and after each cognitive test intervention, t tests were used. To test for relationships between the score of cognitive test and measured value of body composition and α - amylase levels, Pearson ‘s correlation coefficient was used.
Results: Significant improvements in cognitive function were detected after each intervention, with the strongest correlating variable with the cognitive function and body composition comparisons being blood vessel age. Furthermore, there was a negative correlation between stress and cognitive function, with those patients with high stress levels having reduced cognitive function.
Conclusions: Interventions that combine group-games and brain training are effective in preventing dementia. Negative correlations were detected between cognitive function and vascular age, and stress levels. Therefore, in order to maintain the cognitive function, it is necessary to improve the dietary life as a means of improving vascular age and perform activities to provide stress relief.

Among several algal species, Spirulina was heavily exploited and became a commercially important filamentous cyanobacterium due to its inherent ability to accumulate wealth of natural resources such as proteins, minerals, PUFAs and a few vitamins. Hence, several methods are attempted to cultivate both at laboratory, mass and industrial scales(1, 2, 3). Outdoor pond algal cultivation for the production of single cell proteins is one of the oldest technologies intuitively initiated by Borowitzka and Borowitzka(2). Various attempts such as closed system(4), outdoor open tubs with paddle wheel(5), and photo-reactor system(6), designs using confectionary, agricultural and poultry waste(1) are in vogue. In one instance, the yield containing 35 tonnes of Spirulina per hectare per year from a commercial pond was achieved in the Siam Algae Site near Bangkok(7). The attributes of its mass cultivation primarily are due to its photosynthetic pigment, phycocyanin, adaptability, plasticity and its asexual reproduction by binary fission. Due to its increasing popularity as an abundant nutritional biological resource, it is being used in poultry, aquaculture, animal feed, wastewater treatment and agriculture (7 & 8) and also supplementing human food requirements. As a result the single cell protein of Spirulina is being recycled in the ecosystem at different trophic levels. Therefore keeping in view of its importance, it is aimed at devising a simplest protocol to culture Spirulina at our residences being tropical climatic conditions, conducive for algal growth.

The mother culture of Spirulina maxima was obtained from M/S Tejas Biotech Pvt Ltd, Chennai. 50 ml mother culture was mixed initially with 200 ml designed culture medium. The designed medium composition was: NaCl:2.0 g., NaHCO3:16.0 g., NaNO3:2.0 g., K2SO4: 1.0 g., KH2PO4:0.5 g., FeSO4: 100 mg per litre water (boiled and chilled) with pH value of 10.5. The initial culture was kept in an orbital shaker with natural illumination for 7 days and observed the intensity of green colour through UV spectrophotometer at 540 nm. Once, the OD value 0.8 was reached, the initial culture was transformed to 10.0 L volume plastic tubs for mass culture in 1:4 proportions (initial grown culture: medium). The tubs with mass culture were allowed under direct sunlight for 7 days. The growth of Spirulina was noticed everyday by observing the intensity of green colour and replenished with 2 L fresh medium on 4th day. At the end of the 7th day, harvest was done through a muslin cloth (Fig.1.8), slurry mass was centrifuged and then taken into a syringe barrel. With the help of the plunger, the semisolid Spirulina mass pushed through a narrow nozzle of the syringe and allowed to collect on a clean porcelain tiled surface, de-moisturized under ceiling fan initially and later dried under sunlight. Dried Spirulina fragments appeared like green fragile needles which were ready for consumption. A few more observations were made such as growth of Spirulina culture and its microscopic morphology. 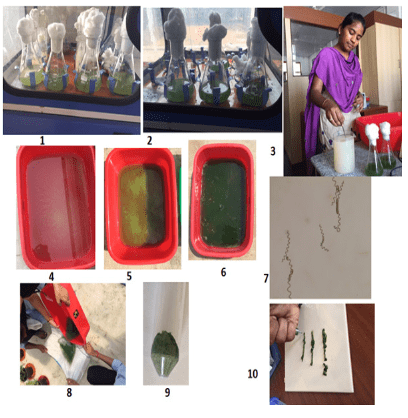 
With the intention of developing a simple protocol for the housewife to adopt the technique of Spirulina culture at home to practice, we followed the aforementioned procedure described. There was a 4 fold increase in the biomass within 14 days of culture duration. To begin with 50 ml mother culture obtained from M/S Tejas Biotech Ltd, Chennai containing 0.738 mg was seeded into 200 ml culture medium (Fig.1.1 & 2) At the end of a series of steps described under material and methods and as shown in Fig.1, there was a profuse growth (Fig.6) of pure culture of Spirulina (Fig.7) and we harvested 2.871 g (Fig.1.9). This slurry biomass was washed twice to bring pH to 7.2. The same was allowed to dry under direct sunlight for three hours after spreading as thin rods on a porcelain tile using a plastic syringe (Fig.1.10). The dried Spirulina was kept in an eppendorf vial for consumption. All the steps followed in the protocol did not require any laboratory sophistication. Further, this protocol yielded pure strains without any contamination (Fig.1.7). In addition, the inorganic chemicals used are neither rare nor unaffordable. Industrial scale cultures are being practiced which requires optimization both at the level of the maintenance of medium concentration and also prevention of facultative pathogens(3).