The isolation and identification based on phenotypic and phylogenetic characteristics of the thermophilic bacteria from different geothermal springs (with temperature 27.5–70 °C) distributed on the territory of Armenia and Nagorno Karabakh were carried out. In total 135 thermophilic and thermotolerant bacilli strains were isolated under aerobic conditions at 55-65 °C and indentified based on 16S rRNA gene sequence analysis as representatives of genera Anoxybacillus, Bacillus, Brevibacillus, Geobacillus, Paenibacillus, Sporosarcina, Ureibacillus and Thermoactinomyces. These thermophilic bacilli were tested for enzyme production capacities such as lipase, protease, amylases and biotechnologically valuable enzyme producers were selected.

Thermostable enzymes, which have been isolated mainly from thermophilic microorganisms, have found a number of commercial applications as they possess thermal stability to harsh industrial processes at high temperatures (DeCastro et al., 2016). The elevation of temperature is accompanied by a decrease in viscosity and an increase in the diffusion coefficient of organic compounds. Furthermore, by performing biological processes at high temperature the risk of contamination is reduced and controlled processes under strict conditions can be carried out (Antranikian, 2008; Kurosawa, 2013).

Thermophilic microorganisms are not grouped into a separate taxonomic unit, but appear in various taxonomic groups and at various phylogenetic distances throughout the taxonomic system (Horikoshi and Bull, 2011; Sharma et al., 2013). It was shown that representatives of the genus Bacillus and related genera to be the thermophilic aerobes most frequently iso¬lated from terrestrial geothermal water environments (Sharp et al., 1992). Typically, enzymes production in the course of Bacillus fermentation processes occurs during a relatively short period of time, with very low cost carbon and nitrogen sources. A great part of industrially valuable enzymes are mainly produced by bacilli (Schallmey et al., 2004). Therefore, screening for novel biocatalysts from thermophiles has become a very important field and can open a new horizon in biotechnology. Between not well known ecological zones of the Earth, thermal springs located in the Minor Caucasus still represent a challenge for searching of undescribed biotechnological resource. The geology of the region where Armenia and NagornoKarabakh are situated is complex, owing to accretion of terrains through plate-tectonic processes, and to ongoing tectonic activity and volcanism (Henneberger et al., 2000; Badalyan, 2000) Numerous geothermal springs of different geotectonic origin and with different physicochemical properties are found on the territory of Armenia and Nagorno-Karabakh (Mkrtchyan, 1969). Recently microbiological investigations of some Armenian geothermal springs were carry out based on culture independent and molecular methods (Panosyan, 2010, Hedlund et al., 2013; Panosyan and Birkeland, 2014). Despite this progress very little is known about the diversity of biotechnologically valuable enzyme producers thriving in Armenian geothermal springs (Shahinyan et al., 2017). The present study focuses on isolation and identification of thermophilic bacilli from geothermal springs of Armenia and Nagorno- Karabakh as well as on screening of hydrolytic enzymes (amylase, lipase and protease) producers. 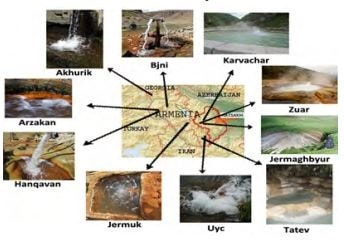 To enrich aerobic endospore-forming thermophilic bacteria slurry water, mat and sediment samples (1g) were inoculated in Nutrient Broth (HiMedia) and incubated overnight at 55, 60 and 65 ºC with shaking at 150 rpm. Before inoculation all samples were treated at 80 oC for 10 min aiming to isolate only spore-forming microorganism (Netrusov, 2005). Cultures showing different colony morphology was further purified by streaking samples on the same medium supplemented with agar (2 %, w/v). All colonies obtained on plates were picked and purified by streaking onto same medium at least three times. The subcultures were considered pure after microscopic observation of a single morphological type per culture. The subcultures’ purity, cell morphology and motility, endospore location and were determined by phase-contrast microscopy of freshly prepared wet mounts.

Phenotypic characterization of isolate. All isolates were tested for their colony morphology, Gram reaction and thermophilic growth using common methods (Netrusov, 2005). The temperature range for growth was determined after incubation of isolates at 5 to 80 ºC by 5 ºC intervals. The pH dependence of growth was tested at pH range of 5 to 12. The range of NaCl concentrations for growth was determined by adding 0 to 15 % NaCl to the incubation medium. Catalase activity was determined by bubble formation in a 3 % hydrogen peroxide solution. Biochemical tests such as nitrate reduction, gas production from D-glucose, formation of dihydroxyacetone and Voges-Proskauer test were carried out according to (Gordon et al., 1973).

Starch hydrolysis were tested by streak plate technique using the medium containing soluble starch (2 % w/v), pepton (1 %, w/v) KH2PO4 (0,5 % w/v), agar (1,5 % w/v), pH 7.0. Amylolytic activity was determined after flooding the plates with Lugol’s solution (0.5 % w/v I2 and 1.0 % KI w/v in distilled water), which turns non-degraded starch a dark color. Colonies that produced clear zones on this medium were identified as amylolytic strains (Dhawale et al., 1982). The purified microbial isolates were screened for lipolytic activity on agar plates containing peptone (1 % w/v), NaCl (0.5 %w/v), CaCl2•2H2O (0.01 % w/v), agar (2 % w/v), and Tween-20 (1 % v/v). The presence of lipolytic activity was indicated by a visible precipitate resulting from the calcium salt formed by the fatty acid from the hydrolysis reaction (Lee et al., 2015). Proteolytic activity was detected by casein hydrolysis on agar plates with medium containing 0.5 % of skim milk powder, 0.5 % of glucose, 2 % of agar, pH 7.0. Enzyme activity was indicated by the formation of a clear zone around colonies after precipitation with 1 M HCl solution (Panda et al., 2013)

The temperature of water of studied geothermal springs in the outlet varied between 27-70 oC. Despite the varying phy¬sical-chemical properties of the thermal springs used for the sampling, they belong to the category of hot springs from low-tem¬perature fields and are characterized by neutral to alkaline pH and high concentration of dissolved minerals and gases. Studied mesothermal springs mainly are related to the hydrocarbonate sodium or hydrocarbonate-sulphate sodium-mag¬nesium classes. The location and physical-chemical parameters of geothermal springs of Armenia and Nagorno-Karabakh are shown on the Table 1.

Collected 52 water, mat and adjacent sediment samples were analyzed to evaluate the total thermophilic aerobic endospore-forming bacterial abundance. A total of 135 isolates with different colony morphologies were obtained from the samples from different geothermal regions. All isolates were rod-shaped, gram-positive, endospore-forming, catalase-positive bacteria. Results of nitrate reduction, gas production from glucose, Voges-Proskauer test and some other properties are shown on the Table 2.

Isolates optimal growth temperature of which was between 60-65 oC were defined as oligate thermophilic, whereas the ones growing at 55 oC were taken as thermotolerant. Although 135 of 40 isolates exhibited thermophlic growth, 95 were found to be thermotolerant. Most of the isolates were able to grow with pH range 6.5-8.5 and 0-5 % of NaCl. 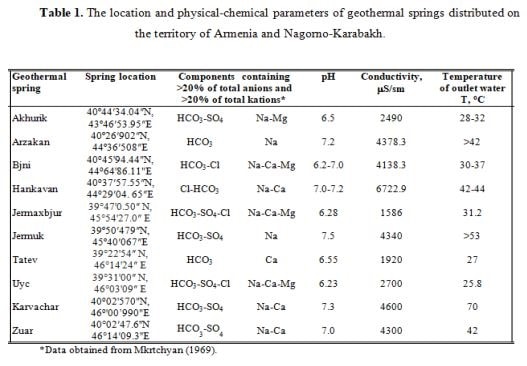 All thermophilic aerobic endospore-forming isolates were identified based on their 16S rRNA gene analysis. BLAST results for the isolates, based on 16S rRNA gene sequences for identifcation of the closest relatives in the GenBank database indicate that they all belong to Clostridium-Bacillus subphylum, group of Bacillus-like genera distributed in genera Anoxybacillus, Bacillus, Brevibacillus, Geobacillus, Paenibacillus, Sporosarcina, Ureibacillus and Thermoactinomyces (Table 3). 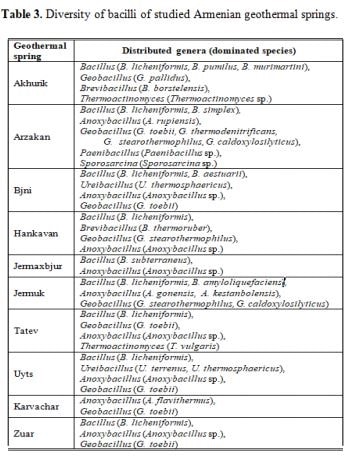 Representatives of the genera Geobacillus and Anoxybacillus are the most distributed obligate thermophiles in the studied hot springs. All isolates from the hot springs that belonged to the genus Bacillus were thermotoleant microorganisms among which B. licheniformis appeared as the dominating species. Studied springs demonstrated significantly lower content of species belonged to genera Brevibacillus, Ureibacillus Paenibacillus, Thermoactinomyces and Sporosarcina. Some bacilli sequences shared less than 96-97% identity with their closest match in GenBank, indicating that the Armenian geothermal springs harbour novel bacilli species. While these results are important for further taxonomic work, positive results on hydrolitic activities are indicative of potential application of these bacterial cultures.

Number of thermophilic bacilli species belonging to the genera Bacillus, Geobacillus and Anoxybacillus have been isolated from different geothermal springs and reported as thermostable amylase, lipase and proteinase producers (Raddadi et al, 2015; DeCastro et al., 2016). Amylases are among the most important commercial enzymes, comprising 25 % of the total enzyme market and used in areas like manufacturing high fructose-containing syrups, fermentation of starch to ethanol, treatment of starch processing waste water (Elleuche, Antranikian, 2013). Lipases have a wide area of usage in detergent, food, bio-resolution of pharmaceuticals, agrochemicals, bioremediation, cosmetics and perfumery industry (Sharma et al., 2013). Proteases, which constitute the 60 % of the global enzyme market, have a wide area of usage in various sectors like detergents, leather, food, cosmetics, medicine and medical diagnosis (Sinha, Khare, 2013).

Therefore, the potential of bacilli species, as candidates for commercial production thermostable hydrolases should be considered. Taken into account this information, amylolytic, proteolytic, and lipolytic enzyme activities of the isolates were detected using a plating technique (Fig. 2). In total 65 strains (almost half of the isolates) showed good hydrolysis of the starch substrate, as indicated by the production of clear zones on the plate. In total 52 lipase and more than 30 thermophilic protease producers were selected among the obtained isolates. Some of isolates which were the members of the genus Bacillus, Anoxybacillus and Geobacillus were lipase and amylase producers. According to the petri dish enzyme assays, a large number of strains have the production capacity of more than one enzyme. Some of the isolates (mainly representative of genus Bacillus), were producers of the three enzymes together.

Fig. 2. Screening of microbial protease (A), lipase (B) and amilase (C) producing bacilli strains isolated from different geothermal springs on the agar plate.

The work was supported by Research Grant from State Committee of Science, Ministry of Education and Science of Armenia, to HP (15T-1F399), Armenian National Science and Education Fund based in New York, USA, to HP (ANSEF-NS-microbio 3362 and 4676) and grant from the Norwegian Cooperation Program in Higher Education with Eurasia (CPEA-2011/10081).