Tyrosinase is the natural enzymes that can be obtained from the multiple sources like bacteria, fungi, plants and mammals and can only purified to a very low degree. Different microbial strains were reported for efficient tyrosinases production like Streptomyces glaucescens, Agaricus bisporus and Neurospora crassa. This enzymes is mainly involved in two step process i.e. hydroxylation of monophenols and oxidation of O-diphnols for production of many pigments (black or brown pigments). Tyrosinase is useful in different industries such as food, biomedical and pharmaceutical. Apart from that they can be applied for bioremediation. Waste water or contaminated soil containing phenolic compounds can be detoxified through their action. Melanin pigment formed under the activity of tyrosinases is good protection for mammals against UV radiations as well.

Tyrosinases a group of binuclear copper enzymes and their closely related compounds like catechol oxidases (known collectively as polyphenol oxidases) found mainly in different groups of bacteria, fungi, plants and animals that use phenolic compounds as substrates and produce compounds like melanin and many other polyphenolic products which are biologically very important (Claus & Decker, 2006; Halaouli et al., 2006; Marusek et al., 2006). Tyrosinase (EC 1.14.18.1) have dual functionality that causes monophenolase activity (hydroxylation of monophenols to o-diphenols) and diphenolase activity (oxidation of diphenoles to o-quinones) (Fairhead &Thony-Meyer, 2012). This enzyme is very important for alive organisms to do different functions, like production of melanin for defensive mechanism against UV radiations (Claus & Decker, 2006; Halaouli et al., 2006). For plants it is important in the production of phenolic polymers like tannins, lignin, flavonoids (Marusek et al., 2006) and for the regulation of redox potential during plant cell respiration and healing of wounds in plants (Mayer, 2006).

Streptomyces glaucescens is a source of best characterized tyrosinase along with the fungal species like Agaricus bisporus and Neurospora crassa. Tyrosinase from fungal and vertebrate sources initiates the first step in melanin formation from tyrosine. Plants have verity of phenolic substrates so these are oxidized by tyrosinase as observed in browning pathway when plant tissues are injured. Agaricus bisporus enzyme extract is highly homologous to enzyme extract of mammals so this make it as a suitable model for study on melanogenesis (Chang, 2009)

Due to multiple sources of tyrosinase its structural properties are diverse in nature along with their distribution in tissues and cells, so no common protein is observed across all species (Mayer, 2006; Jaenicke & Decker, 2003). The difference is observed in primary structure, size, in post modification sites like active site and in glycosylation mechanism. Common thing in all tyrosinases is their binuclear type III copper centre containing two copper atoms each connected with six histidine molecules in their active site. These copper atoms are linked with atmospheric oxygen that catalysis the two different reactions (1) ortho-hydroxylation of monophenols and (2) oxidation of o-diphenols to o-quinones. Crystal structure contain each copper coordinated with 3 histidine like in CuA and CuB as shown in the figure 1 (a) and (b).

Human tyrosinases are glycoproteins which are membrane bounded and their monomers have more than one isoforms. Similarly tyrosinases from bacteria like Streptomyces species have non-modified monomers of MW 30KDa (Wu et al., 2010).

Tyrosinase can be produced and extracted through number of organisms such as bacteria, fungi, plants and mammals (Table 1). Tyrosi - nases can be purified from these sources and studied for specific functioning. 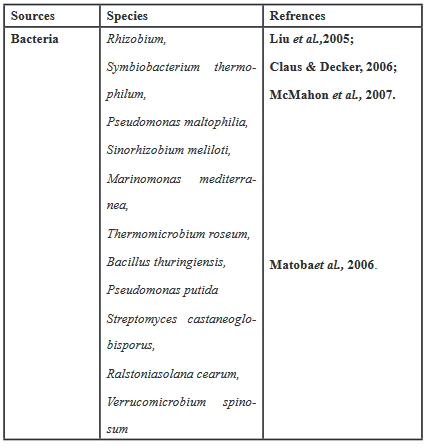 Figure 2:   Methods for the purification of tyrosinase. Adopted from (Zaidi et al., 2014).

Tyrosinase is involved in the biosynthesis of melanin in the melanosomes causing pigmentation of skin, hair and eyes in mammals providing the protection against UV (Ando et al., 2007). The enzyme plays a crucial part in immune response (primary) and healing of wound in plants, various invertebrates as well as sponges. It is significant for spore forming, protecting tissues ad survival after some lesion or injury in fungi. It has a vital part in protection of bacteria. The enzyme has important medical applications including melanin synthesis for therapeutic purposes, L-DOPA production, a drug utilized to treat the Parkinson's disease, manufacturing antibiotic lincomycin and treating various neurological diseases (Valipour& Burhan, 2016). Mushroom tyrosinase has clinical application to treat vitiligo (Seo et al., 2003).

This enzyme produce hydroxyl tyrosol that has application of food additive. This is employed in the food manufacturing industries, for instance to make theaflavins, a collection of compounds in black tea possessing anticancer and other properties (Valipour& Burhan, 2016). Biopolymers are being developed by the food industries that possess particular properties. They have functions al., 2004). The properties of meat like capability of gel formation, textural and binding properties are vital to manufacture various meat products. The gelation of muscle proteins induced by the heat is serious in the processing of meat as it determines the texture of final product. So cross linking enzymes are exploited to tailor these gelation properties. Enzymes like transglutaminase, laccase and tyrosinase have recently been used to test for pork and chicken proteins (Selinheimo, 2008).

Various industries like paper, chemical, textile, mining, coal and petroleum produce wastewaters that consist of the phenols and its derivatives. Tyrosinase is capable of oxidizing the phenols into insoluble substances that can be eliminated by precipitating or filtering them (Fariaet al., 2007). Phenolic componds present in aqueous solutions can be eradicated by adsorbing them onto the granular activated carbon or cloth (Brasquet et al., 1999). As tyrosine is detoxifying agent of xenobiotics having phenol structure, so among them, chlorophenols are specific contaminants present in wastewater (Marino et al., 2011). The industries such as leather, textile, pharmaceutical and paper, generate different dyes mostly azo dyes, which are a dangerous to environment. Under certain conditions, they are decolorized by bacteria and then degraded by the tyrosinase (Saratale et al., 2011). Mechanism as emulsifiers and to manufacture less fat and less calorie foods. 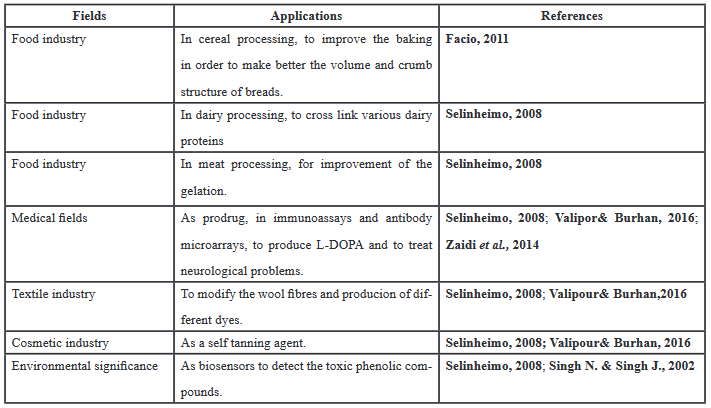 Natural polymers can be cross linked to produce new polymers using mushroom tyrosinase (Faria et al., 2007). They form cross links on the basis of accessibility and abundance of target protein. Modifications in the properties are very important for use in various fields like food processing (Heck et al., 2012). The enzyme can be used for grafting of specific compounds to biopolymers and yielding novel bioproducts. Tyrosinase provides an easy method in the conversion of byproducts of food processing to environmentally favorable items with valuable functional characteristics (Aberg et of L –tyrosine conversion to L-DOPA and then to o-dopaquinone involves the application of tyrosinase (Faria et al., 2007).

As there is a great demand for different enzymes in the industries, tyrosinase is one ofsignificant commercial enzymes. Microbial tyrosinases are highly promising enzymes for the pharmaceutical and food bioprocessing technologies. However, to use these microbial tyrosinases to fulfill their industrial potential, further research is needed to be carried out.

No conflict of Interest