Aim: This study focused on the Melitor (agomelatine) effects on the psychic-emotional activity, cerebral hemodynamic and bioelectrical activity of the brain in the patients with post-stroke depression.
Patients: Thirty patients with post-stroke depression were treated with Melitor in the dose of 25 mg daily during two months.
Results: Treated with Melitor, the study patients suffering from post-stroke depression showed positive drug effect on the psychic-emotional activity, improvement of cerebral hemodynamic and harmonization of the brain bioelectric activity. In the patients with right- versus left-hemispheric stroke, Melitor had more pronounced effect on the cerebral hemodynamic bioelectric activity of the brain. Owing to its multi modal action, the Melitor is recommended for the patients during their recovery after stroke in the sense of improving their functional and psychic-emotional state.

Rehabilitation of the patients after stroke is considered to be the greatest medico-social problem. Stroke causes motor, sensitive and psychic-emotional disturbances and narrows the range of their social and daily living activities. Long-term and systematic rehabilitation have the potential to restore the walking and self-servicing abilities [3, 14]. Among the factors that negatively influence rehabilitation of the post-stroke patients have been shown to be changes in psychic-emotional sphere, depression and dementia [9,16]. One of the main mechanisms of a negative impact of depressive disorders on the effective recovery treatment is lower patient’s motivation in participation in the rehabilitation measures [2, 12].

Prevalence of the post-stroke depression varies within 40-50%. Women are more affected with vascular depression. Its peak is seen during first 3-6 months after stroke. However the risk of depression appearance remains high during first two years ,sup>[8, 15]

. Among the risk factors of post-stroke depression, the mentioning has been made of the age, prestroke sub-cortical atrophy, family and personal history indicating psychiatric disorders in the past [11]. It has been found that post-stroke depression is strongly correlated with cognitive impairments, passive perception of the quality of life and increased mortality [7, 17]. According to the trans cranial doplerography, the cerebral blood flow velocity is decreased in the patients with post-stroke depression [4]. Therefore adequate treatment of post-stroke depression should be considered not only as the way of reducing depressive symptoms, but also and the way of improving life quality, enhancing rehabilitation efficacy of the patients, and reducing their physical disturbances [6]. In recent years it has been well reported that certain groups of antidepressants, when administered during acute post-stroke period, enhanced brain plasticity and thereby promoted maximal neurological recovery after stroke [10].

The new generation of antidepressants, melatoninergic antidepressants in particular, are the first choice for post-stroke depression therapy [1]. The representative of this class is Agomelatine developed by the pharmaceutical company Servier. Melitor is an antidepressant which is capable of renewing circadian rhythms being disturbed in the patients with depression. Melitor is the agonist of МТ-1 and МТ-2 melatonin receptors and the antagonist of serotonin 5-НТ2с receptors located in the suprachiasmatic nucleus regulating circadian rhythms. Influence of Melitor on these three types of the receptors ensures a marked antidepressant and anxiolytic effect. Therapeutic effects of the Melitor are seen by the end of the first week of treatment when circadian rhythm of the patient is normalized, his daily activity and sleep are improved. His spirit and cognitive functions become improved over the two- three week period [1, 5, 12, 13].
Aim: Complex analysis of Melitor influence of the CNS functioning in the patients with post-stroke depression.

Analysis of the dynamic of the subjective complaints of the post-stroke patients with depression перенесших ишемический инсульт с депрессией before and after a two-month Melitor course treatment has showed the decrease of the number and intensity of complaints (Table 1).

Table 1: Dynamic of subjective complaints of stroke patients before and after a two-month Melitor course treatment, %

As is seen from this table, the patients with left-sided ischemia localization had better sleep, lesser physical fatigue, lesser headaches and irritability. Melitor treatment reduced the levels of depression and anxiety (Table 2).

Table 2: Dynamic of induces of post-stroke gerontological depression and Hamilton scale in the patients before and after Melitor treatment, scores.

According to the gerontological scale induces, the patients with right-hemispheric ischemia treated with Melitor displayed more marked decrease of post-stroke depression in the comparison with the left-sided patients. In the latter the induces evaluated by Spielberg-Khanin scale statistically decreased (46.7±2.1 and 38.1±1.8 scores before and after treatment, respectively) and the induces of reactive anxiety decreased (from 44.6±2.2 to 34.2±1.1 scores, respectively). At right-sided hemispheric ischemia the level of constitutional and reactive anxiety were also reduced: from 51.5±2.0 to 41.4±2.31 and from 47.1±1.8 to 37.0±3.1 scores, respectively.

In conclusion, the Melitor medication demonstrates an anxyolytic effect, namely reduction of psychic and somatic components of anxiety. According to the Barthel scale measurements, the levels of social and daily living activity increased from 78.3±2.4 to 91.5±1.8 scores. Clinically this was shown by increased motor activity and wider range of daily living self-servicing and better coordination, To analyze the mechanisms determining Melitor effects on the psychic-emotional condition of post-stroke patients, we performed analyses of the brain functioning (according to the induces of cerebral blood circulation and bioelectric activity of the brain) before and after course of treatment with Melitor. We observed improvements in cerebral hemodynamic, judging by the increase of systolic linear speed of blood flow (LSBF) in separate parts of the carotid and vertebral-basilar basins.

There is however another remark to the drug effect, it has shown the hemispheric peculiarities on the cerebral blood speed (Table 3). With right-sided ischemia localization, the statistically significant increase of LSBF rate was observed in the right в правой MBA, left ВСА, in the two VA, in the two ABA and BA. With left-hemispheric ischemia localization there was a statistical increase of LSBF only in BA кий инсульт, курсовой прием препарата Melitor causes decrease of peripheral resistance indexes predominantly in the patients with left-hemispheric stroke. For comparison, the pulsation index in the intact СМА at right-sided stroke localization decreased from 0.8±0.05 before to 0.7±0.02 after Melitor treatment. In the cases of left-sided stroke this index in the injured ICA decreased from 0.9±0.04 to 0.8±0.03 and the circulatory resistance index in the injured ABA from 0.5±0.02 before to 0.4±0.03 after treatment. This suggests more pronounced influence of Melitor on the peripheral resistance indexes in the patients with left-sided stroke. 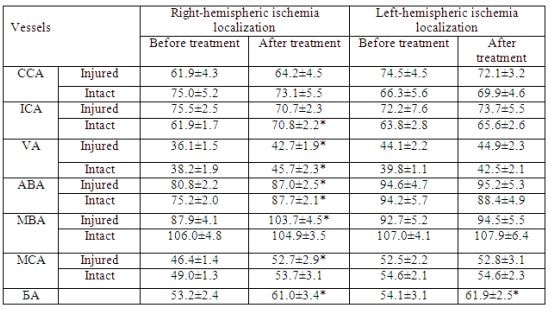 Notes to the tables 1-3:
* - Statistically significant differences before and after treatment

Knowing that computer EEG allows assess quantify the degree and structure of the brain functional changes and their dynamic that may serve an objective criterion for assessment of the mechanisms of action of drugs in the stroke patients, we analyzed the bioelectric activity of the brain in the patients with post-stroke depression who had undergone treatment with Melitor. It appeared that the structure of rearrangement of the intensity of the main EEG rhythms has definite hemispheric peculiarities.

Benefits of the two-month treatment of the patients with poststroke depression using the medication Melitor in the 25 mg dose daily:
1. Overall health improvement, better sleep, lesser frequency and intensity of headaches, lower level of anxiety depressivity, wider range of social-daily living activities.
2. With right-hemispheric stroke localization, the cerebral blood flow induces become increased in separate vessels of the carotid (MBA, PCA and ICA) and vertebral-basilar (VA) basins. With left-hemispheric stroke localization, there was a statistically significant increase of LBFV only in the vertebral-basilar basin vessels.
3. With right- versus left-hemispheric stroke localization, the drug effect was more marked on the cerebral hemodynamic and bioelectrical activity of the brain.
4. The effects of Melitor on cerebral hemodynamic and bioelectric activity of the brain were more pronounced in the patients with left-sided stroke localization.
5. In the left hemisphere the range of correlations between LBFV and the intensity of separate EEG rhythms was 7-fold reduced whereas with the right-sided stroke it was 4-fold increased that evidenced for hemispheric peculiarities of reorganization of interrelationships between cerebral hemodynamic and bioelectric activity of the brain.