Fracture of anterior incisors are most common form of dental trauma. Retaining the available tooth structure and rehabilitating the tooth is of prime importance. Newer materials available possess great values in replacing the lost tooth form and improving the chances of longevity in the oral cavity. This clinical case reports the endodontic management of fractured maxillary incisor using bioactive mineral based root canal sealer.

This QI project represents a practice change in an assisted living facility with certified nursing assistants (CNAs) on a handoff tool for their end-of-shift report.

Communication problems account for 60-70% of sentinel events in health care, largely due to the numerous handoffs of significant patient information between staff (Hohenhaus et al., 2006; Adamski, 2007). The term “handoff” is synonymous with handover, shift report, end-of-shift report, and sign-out, and it describes the process of exchange of information during transitions in care (Manias and Street, 2000). Although this may seem a simple task, the handoff report is significant and critical for patient safety and care (Birmingham et al., 2014). The Joint Commission International Center for Patient Safety reported that communication problems are the number one cause of sentinel events stating that handoffs are defective 37% of the time (Steifferman et al., 2012). The National Academy of Medicine’s Crossing the Quality Chasm report reiterated the need for health care organizations to standardize the procedure for handoffs since inferior, inadequate and poorly performed handoffs lead to delays in care and discontinuity in patient safety (Institute of Medicine, 2001).

In assisted living facilities (ALF), certified nursing assistants (CNAs) have a critical role in the care of residents (Zheng and Temkin-Grenne, 2010). Nearly 90% of direct resident care in ALFs is provided by CNAs (Bonner et al., 2009). CNAs are typically the first to observe and report changes in the residents’ functional and mental status (Zheng and Temkin-Greene, 2010). For this reason, CNAs are of particular importance in establishing safety culture in ALFs. Safety culture and patient safety climate (PSC) are often used interchangeably (Lydon, et al., 2016). Handoff from the CNA is important to the oncoming shift because it ensures the safety and well-being of the resident (Lyhne, et al., 2012). Based on the recommendations of the Institute of Medicine and The Joint Commission (TJC), patient safety, including the measurement of patient safety climate, has become a top priority for US health care organizations (Bonner et al., 2009).

Standardized tools used in end-of-shift communication have increased the focus and consistency of the shift report while making the reports more comprehensive and patient-centric (Cornell et al., 2013). Therefore, a standardized procedure and tool is the most effective process for handoff (Frieitag and Carroll, 2011).

Problems Due to Lack of Standardized Handoff

At an ALF in rural North Carolina, omissions in report, lack of clarity in report, frustration and dissatisfaction with the current reporting system were observed among the CNAs in their current reporting process. The CNAs’ end-of-shift report might be enhanced with a formal tool to report on any changes in residents’ condition as well as any other concerns about the resident. Thus, the goal of this QI project was to implement a practice change that would include introducing and educating the CNAs on a standardized handoff tool to use during their end-of-shift report.

The aims of this QI project were 1) to improve facility safety climate as evidenced by an increase in scores on a safety climate survey; 2) to improve CNA end-of-shift communication as evidenced by an increase in scores on an end-of-shift communication survey; 3) to decrease resident falls in the facility as evidenced by a post-project chart review; 4) to measure CNAs’ fidelity on the use of the standardized handoff tool during the project period; 5) to determine the impact of this project on resident care via focus groups.

Design
This QI project featured a mixed-methods design with pre-post surveys and two focus groups. The project was approved by the institutional review board at the participating institution as well as the Executive Director and Director of Nursing (DON) at the facility.
Setting
The QI project was completed on the second floor in a 120 apartment ALF located in a rural northwest town in North Carolina. The second floor consisted of 46 private apartments with the average age of the resident equaling 88 years old. The nursing staff consisted of one registered nurse (RNs), 10 licensed practical nurses (LPNs), 20 CNAs and the Director of Nursing (DON).
Sample

A pre- and post- satisfaction with end-of-shift communication survey was completed by the CNAs (Table 1). 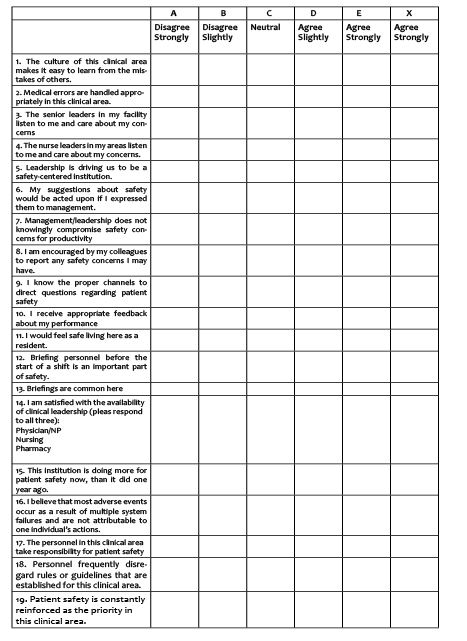 Each resident’s fall in the ALF is documented on a communication form that the nurses use to document sentinel events. The data for analysis of falls was obtained via chart review for one month pre-implementation, during the four-week implementation of the new handoff tool and for one month after implementation. Post-project process measures were obtained by two focus groups consisting of 1) CNAs who participated in the project and 2) the Executive Director and DON and the team leader nurses who had participated in fidelity monitoring of the CNA end-of-shift reporting. (See Tables 3 and 4 for focus group questions.)

During changes of shift in Week One, the QI coordinator trained the CNAs on the new end-of-shift communication tool called I-PASS (Starmer, et., 2014). The I-PASS tool (Figure 1) was chosen after literature had shown a positive effect in handoff and patient care (Starmer, et al., 2014). Minor modifications were made to the tool that did not pertain to CNAs in the communication of the care of residents in an ALF.

After training the CNAs, they began using the handoff tool at the end of their shift while giving their end-of-shift report. During the CNA handoff report, fidelity monitoring was completed by the DON and the LPN team leaders.

A total of 6 CNAs, 5 female and 1 male, participated in the project. Five (81%) participants were over 35 years old and four (66%) had been in their position with the facility for more than one year. There were 44 resident charts reviewed for falls data for this project. To determine if CNA end-of-shift communication was improved, a t-test was performed to compare the total scores between the pre- and post- groups for CNA satisfaction with end-of-shift report. A statistically significant increase in the CNA satisfaction with the end-of-shift report was found after using the I-PASS tool (t (5.07) = -4.47, p < .01).

To determine if CNAs’ perceptions of facility safety climate were increased, a t-test was performed to analyze the total scores between the pre-and post- implementation safety climate scores. The results revealed a non-statistically increase in climate safety for pre- to post- implementation (t (10) = -1.61, p = .138). Descriptive and inferential statistics determined there was an increase in falls throughout the project with data analysis showing a 7% fall rate one month prior to the project, an 18% fall rate during the project and a 27% fall rate post project.

Focus groups involving ten staff members revealed positive themes as both the CNAs and administrators favored the use of the tool and saw it as an improvement to the CNA end-of-shift reporting process and in the safety climate of the facility. The primary themes of using the new handoff tool that were derived from the CNA focus group data included improving safety, practicality, and improving CNA preparedness (Table 3). The primary themes derived from the administrator and nurse team leader focus group data included sustainability, safety awareness and efficiency (Table 4). 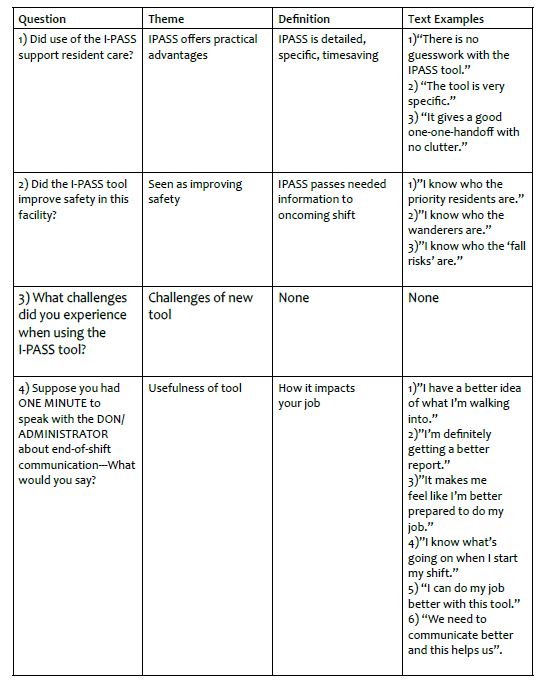 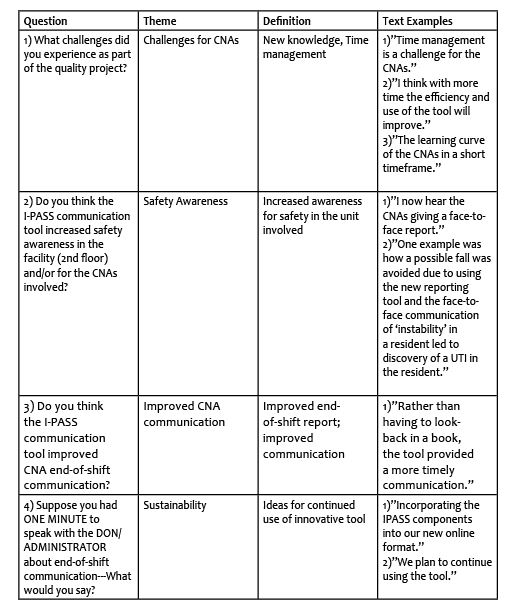 Fidelity monitoring of I-PASS use was 100%.

The goal of this QI project was to implement a handoff tool to improve CNAs’ satisfaction with their end-of-shift reporting protocol as well as improve the facility’s safety climate. There was improvement in satisfaction with end-of-shift reporting and while not statistically significantly, there was an increase in the safety climate. However, employee satisfaction with handoffs has a positive association with job performance, and job performance has been positively correlated with patient safety (Streitenberger et al., 2006). The results of this QI are consistent with previous literature, supporting the benefits of handoff in nursing, increasing the CNAs’ confidence with reporting patient changes in condition and increasing staff satisfaction (Athwal et al., 2009).

The one outcome that did not improve during the QI was resident falls. Previous literature has shown that increasing facility safety climate may decrease falls (Athwal et al., 2009; Croos, 2014; Zou and Zhang, 2015). There are several reasons why resident falls may have increased during this project. One reason may be that the CNAs were more aware of safety climate and therefore were reporting falls more frequently during the QI project. In addition, there were CNAs who may not have been involved in the training but crossed over in the care of the 2nd floor residents during the course of the project and any subsequent fall data were recorded in our results. Finally, the QI project was implemented during a holiday period when residents are usually up and out of their rooms more often. Hopefully, the results of this QI will provide support for a practice change for CNAs and handoffs, acknowledge TJC’s communication goals (Jointcommission.org, 2017) and encourage further research.

Communication problems account for 60-70% of sentinel events in health care, largely due to the numerous handoffs of significant patient information between staff. The handoff report is significant and critical for patient safety and care. There is no literature existing on handoffs with CNAs in ALFs. Nearly 90% of direct resident care in ALFs is provided by CNAs and they are typically the first to observe and report changes in the residents’ functional and mental status.