Endoscopic ultrasound (EUS) is a very important procedure to preoperatively localize insulinomas and plan the surgery. This end with less time and less invasive surgical approach. However, under optimal conditions, about 10-20% of insulinomas are missed even by experts. The purpose of this retrospective study was to recognize factors that could affect EUS results.
Methods: This study was carried out at Al-Assad University Hospital (AUH), Damascus, Syria. Eighteen patients fulfilled the inclusion criteria ( positive 72 hours fasting test and successful surgery with histopathology confirmation). All EUSs were performed by one experienced examiner.
Results: All 18 cases were benign insulinomas (16 were tumors and two were hyperplasias). Preoperative EUS did not detect six tumors (negative EUS). They were all isoechoic to surrounding normal pancreatic tissue. The ten detected cases (positive EUS = 62.5%) were hypoechoic, isoechoic or hyperechoic lesions. Positive EUS patients were younger than negative EUS patients (P =0.05). The mean tumor diameter in positive EUS was significantly larger than negative EUS (P =0.04).
Conclusion: Some Isoechoic Insulinomas were not detected by EUS imaging. Smaller tumor diameter and older age of the patient might be behind negative imaging.
Keywords: Preoperative Diagnosis, Insulinoma, Endoscopic Ultrasound, EUS

Insulinomas are endocrine pancreatic beta cells tumors. Even though they are rare, insulinomas are the most common functioning islet cell tumor of the pancreas. Their incidence is about one in 250,000 patient/year (Cryer, 2008; Hoem, 2008). Patients are almost always cured lifelong with complete elimination of a benign insulinoma (Grant, 2005). Mehrabi et al, in 2014, carried out a systematic review for 114 articles with 6222 cases of insulinoma. They reported that patients with insulinomas are mostly in their fifties, with a higher incidence in men. In conclusion they found that insulinomas are mostly sporadic (94%), benign (87%), and single (90%) (Mehrabi A, et al. 2014). About 10% of insulinoms are part of Multiple endocrine neoplasia type 1 (MEN-1) (Thakker RV, et al, 2012; Carroll RW, 2013). Inhospital watched full prolonged (72h) fasting test is the confirming diagnostic test of insulinoma with an accuracy of approximately 100% (Kann PH, et al, 2007). After that, it is mandatory to localize insulinoma by imaging procedures. These are non-invasive such as abdominal sonography, magnetic resonance imaging (MRI), computed tomography (CT), and the scintigraphy of somatostatin receptors. Other procedures are invasive such as preoperative and intra-operative endoscopic ultrasound (EUS). However, all these methods have low sensitivities (Müller et al, 1994; Zimmer T, et al, 2000; Kann P & Zielke A, 2005; Kaczirek K, et al, 2004).

The intra-operative EUS is more accurate and could improve the detection of pancreatic tumor (near 100%) (Chung JC, et al, 2006). Since 1990s EUS has been considered the reference method in localizing insulinomas with using a high-frequency sonography probe, that can get very close to the pancreas ( Kann P 2016, McLean, A. M. and Fairclough P. D, 2005; Nesje LB, et al, 2002). Preoperative EUS helps in surgical planning to end with minimal invasive approach in shorter time. This because it precisely localize the tumor and its relation to vital structures (vessels, bile and pancreatic duct), in addition to determine whether the disease is uni- or multifocal (Fendrich V, et al, 2004; Langer P, et al, 2005; Kann P, et al, 2001; Kann P, 2006). It could also distinguish benign from malignant lesions and confirm that by guided fine needle aspiration (Gornals J, et al 2011; Leelasinjaroen P et al, 2014).

EUS detection rates ranged between 86.6% and 93% (Okabayashi T, et al, 2013; Tavcar I, et al, 2014). In 2015, Tellez-Avila et al reported that EUS sensitivity, positive predictive value, and accuracy are 100 %, 95.4 %, 95.4 % respectively. Despite this, 10-20% of insulinomas cannot be diagnosed by EUS, even with experienced examiners and under optimal conditions (Tellez-Avila et al 2015 , Kann P & Zielke A, 2005; Mirallie E, et al, 2002). Above and beyond examiner’s experience, many factors that might affect EUS outcome were reported . First, different devices have different accuracies (i.e. higher frequency in MHz gives higher accuracy) (Bhutani, Deutsch, 2010). Second, EUS should be done under standardized conditions (like sedation and positions of the patient). Finally, there might be factors that are related to patients; Kann et al, reported that low body mass index, female gender, and young age are associated with negative EUS (Kann P, et al, 2007). The purpose of this study was to recognize factors that might affect EUS imaging in patients with pancreatic insulinomas. This could help in finding new ways or techniques to avoid false negative results. There is no such study in Syria.

This retrospective study was carried out at Al-Assad University Hospital (AUH) in Damascus, Syria. Inclusion criteria were: a positive 72 hour fasting test, preoperative EUS imaging, successful surgery and histopathology. 72h fasting test protocol in AUH: No food intake but patient is allowed to drink calorie-free and caffeine-free beverages. Blood specimens are collected for measurement of blood glucose every six hours until the glucose concentration is below 60 mg/dL (3.3 mmol/L); at this point, the frequency of sampling is increased to once every one to two hours. The test is ended when blood glucose concentration is ≤45 mg/dL (2.5 mmol/L), the patient has symptoms or signs of hypoglycemia, or when the blood glucose concentration is less than 55 mg/dL (3 mmol/L) if Whipple’s triad (hypoglycemic symptoms that improved with eating) was documented on a prior occasion. Blood specimen is collected before allowing the patient to eat for blood glucose, insulin, C-peptide, and cortisol (to rule out adrenal insufficiency)

72h fasting test is positive when insulin-glucose ratio is > 0.25 (Wiesli P, et al, 2002). Exploratory surgery may be established after positive 72h fasting test even if all of the other diagnostic procedures were negative.
All EUSs were done by the same expert examiner using the same device, OLYMPUS EndoEcho (EU-C 2000 endosonoscope) with OLYMPUS UWS-1water supply unit (for ultrasonic endoscope), and OLYMPUS OEV181H high definition monitor.

The patients were positioned in the left decubitus and under conscious sedation. Fiberscope is inserted as far as the second portion of the duodenum in oblique-viewing with the transducer located at the tip of the fibroscope. Scanning was performed with de-aerated water filled balloon applied to the tip of the echoendoscope. Primarily, pancreatic head was scanned for exploration of the entire head of the pancreas, the instrument was straightened in the same way as endoscopic retrograde cholangiopancreatography (ERCP). The probe was adherent to the duodenal wall. If the insertion depth of the instrument was correct, the pancreatic head and the uncinate process could be seen. Then, the endoscope was drawn backwards to the stomach and scanning of the rest of the pancreas was performed. The pancreas was scanned longitudinally in a craniocaudal direction with clockwise rotation and slight retraction of the scope towards the spleen then the pancreatic body and tail were imaged (Dietrich, 2006). 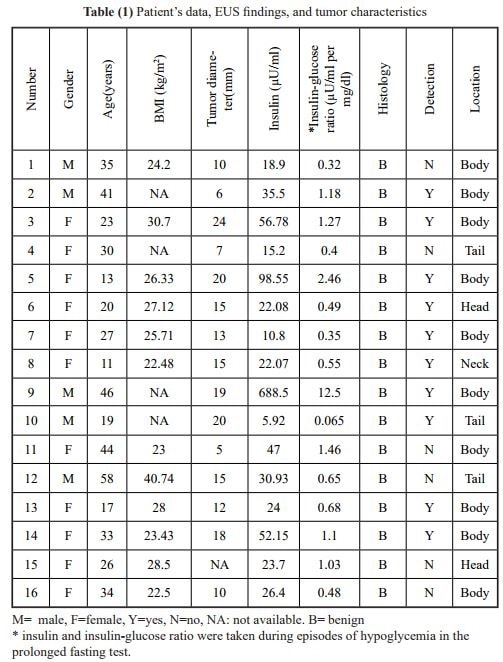 Our study showed that smaller tumor diameter and older age of patient might affect EUS detection ability and end with negative result. It is reasonable that the larger the tumor diameter the higher the chance of detection. The echognicity of the pancreas increases with age beginning at the 4th decade of life which means that the pancreas echognicity is higher than the liver’s (Glaser J, et al, 2000). Increasing age or obesity leads to a uniform increase in echogenecity that is referred to as pancreatic lipomatosis this greatly increase the contrast to anechoic splenic vein and the confluence of the portal vein. Pancreatic tumors are often more hypoechoic than the rest of the parenchyma and are difficult to be distinguish from adjacent bowel loops or peripancreatic lymph nodes. This might explain the tendency to have negative EUS in older patients.

Our results did not match with Kann et al results which reported that low body mass index, female gender, and young age all associated with negative EUS. These differences between our study and theirs might be explained by three reasons. First, they have a larger sample size than ours (29 patients vs. 16). Second, different devices and examiners might end with different results. Finally, while our patients were lying on the left side, their patients were in supine position. The former position of patient might give negative EUS, because the transducer of the fibroscope might go to a more lateral position by sliding over the pancreas. Some studies reported that repeating EUS with a supine position might make negative EUS positive. Because small sample size is the main limitation, further studies are warranted to be carried out with a larger sample size. Being a retrospective study is another limitation. Prospective study considering these risk factors (which we concluded) and changing position to the supine one in case EUS with left position is negative, might end with different results.

The authors wish to thank Faculty of Medicine, Damascus University and AUH for ethical approval. They also thank Dr. Muhammad Rafat B. Meda and Dr, Mohamad Emad S. Abdulrhman for assistance in data collecting. They appreciate Miss Hend Alkabbani, and all members of medical record department at AUH for their help. 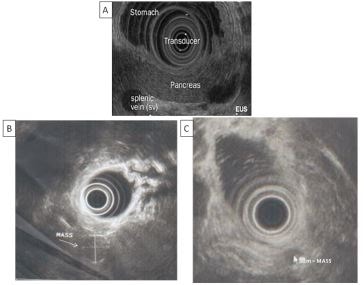