Yolk sac tumor is a rare neoplasm, which affects children and adolescents. Majority of the YSTs occur in the gonads, but about 20% have been found in variety of extragonadal sites such as mediastinum, retroperitoneum, neck and presacral areas. When exfoliative cytologic samples are considered, yolk sac tumors are most often identified in pleural, peritoneal, or pericardial fluids. Touch preparations (TPs) of intraoperative tissue have been used for cytologic diagnosis. Fine-needle aspiration (FNA) is not commonly used to study primary malignancies in the testis or ovary. However, this method is well suited to the evaluation of yolk sac tumor metastases and is a useful diagnostic method when applied to extragonadal primary lesions. We describe the cytomorphology of this tumor in ascitic fluid of an 18 year old female.

Yolk sac tumor (YST) of the ovary is a rare neoplasm typically affecting children and young women.1 Fine needle aspiration biopsy is an extremely useful procedure for the diagnosis of YST. Main objective is to describe the characteristic cytological features of fine needle aspirates of YST. Majority of the YSTs occur in the gonads, but about 20% have been found in variety of extragonadal sites such as mediastinum, retroperitoneum, neck and presacral areas.2,3 We describe the cytomorphology of this tumor in ascitic fluid of an 18 year old female, who presented with right adnexal mass and discuss its differential diagnosis from other neoplasms.

An 18 year old female presented to the Gynaecology clinics with complaints of heaviness and discomfort in the right lower abdomen with tense abdomen since the last 2 months. Ultrasonography abdomen showed a large ill-defined hypoechoic mass of size 10 cm × 8 cm × 6 cm in the right adnexal region with ascitis. Genitals were normal. Serum alphafetoprotein level was elevated to 690 IU/mL. 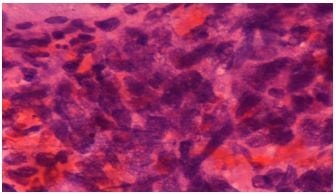 
The tumor cells showed ovoid nuclei with irregular nuclear membranes, coarse clumped chromatin and prominent nucleoli. Majority of the cells showed abundant cytoplasm containing numerous irregularly shaped vacuoles with intra cytoplasmicinclusions of pink homogeneous material (Figure 2). Based on the cytological findings, a diagnosis of malignant germ cell tumor was made. Histopathology after excision biopsy of the mass confirmed it to be yolk sac tumor with inhibin positivity on immunohistochemistry. 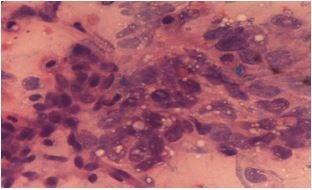 Malignant germ cell tumors account for about 3% of pediatric malignancies, with the commonest being YST.3 Teilum in 1960 described this tumor in the testes of young childrenand in the ovaries.4 The lesion is considered to be the infantile variant of embryonal carcinoma.5 Yolk sac tumor arises primarily from the testis and ovaries, but some extragonadal sites such as the vulva, vagina, pineal region, broad ligament, prostate, cervix, mediastinum, saccro-coccygeal and retroperitoneum region have also been documented.6 The cytological findings of the yolk sac tumor reveals clusters of cells in a glandular appearance with large pleomorphic cells, vacuolated cytoplasm and PAS positive, diastase resistant hyaline globules.7 Ultrastructural findings are a well-defined cell membrane with frequent desmosomes, prominent rough endoplasmic reticulum, numerous mitochondria, free ribosomes, glycogen granules, and dense membrane bound lysosomes.8

Yolk sac tumor has a variable histological pattern like reticular, solid, pseudopapillary and polyvesicular vitelline, which reflects toward extra-embryonic yolk sac structures.8,9 The differential diagnosis of yolk sac tumor are poorly differentiated adenocarcinoma, dysgerminoma and embryonal carcinoma. The tumor cells of embryonal carcinoma show marked nuclear pleomorphism and blurred nuclear membranes, cellular cohesion with severe overlapping with branching capillaries whereas dysgerminoma shows cells in dyscohesive groups or singly arranged, with cytoplasmic glycogen vacuoles and a large pleomorphic and hyperchromatic nucleus with lymphocytes and plasma cells int a tigroid background. Our case of an18 year old female who presented with metastatic yolk sac tumor of the gonads, showed cohesive clusters of pleomorphic cells, in papillary configuration with intra-cytoplasmic pink globules. Alpha-fetoprotein positivity of the neoplastic cells of yolk sac tumor is the most consistent cytologic hallmark of this neoplasm.9

Yolk sac tumor tends to recur locally and also have a high incidence of metastatic disease at the time of presentation.6 Complete excision should be attempted in a malignant lesion.7 Adjuvant Vincristine, actinomycin-D and cyclophosphamide chemotherapy has been most extensively used in children with endodermal sinus tumors.7 The role of radiotherapy is less certain in YST of extragonadal origin. Metastatic lesions may require palliative treatment with local radiation.8 Patients with sacro-coccygeal tumors have a greater probability for survival than those with tumors at other sites. Early detection and therapy is important because it is highly aggressive tumor that shows good response to surgery and chemotherapy.

A rapid and specific diagnosis of yolk sac tumor can be made by FNAB, which may be extremely beneficial and cost effective and spare the patient a host of diagnostic procedures and aid in planning definitive therapy, which may include chemotherapy and radiotherapy, in addition to surgical resection.