AIM: We reviewed cases of soft-tissue sarcoma to gain insight into the presentation, treatments and outcomes for this rare disease and to determine various factors associated with outcomes.
METHODS:This is a retrospective study of histologically confirmed cases of soft tissue sarcoma seen at RIMS Ranchi over a period of 2 years between Jan 2012 and Dec. 2014. Data were retrieved from patients’ files and analyzed using SPSS computer software version 16.0
RESULTS: A total of 30 cases were studied. Male to female ratio was 4:1. Mean age of presentation was 46.5 ± 9.2 years. Most common site was lower limb (46.7%) followed by upper limb(16.7%). The vast majority of patients (56.7%) presented with large tumors of ≥10 cm in diameter. Lymph node metastasis at the time of diagnosis was recorded in 23.3% of cases and distant metastasis was present in 30% cases. Liposarcoma (30.0%) was the most common histopathological type followed by fibrosarcoma (23.3%). Surgical excision was the most common surgical procedure performed in 76.7% of cases. Surgical site infection was the most common complication in 43.0% of patients. Local recurrence was noted in 16.0% of cases. Mortality rate was 43.3%.
CONCLUSION: In conclusion, soft tissue sarcomas are aggressive tumor and has a high propensity for metastasis. Early diagnosis and complete excision of a small primary tumor is important in the treatment of soft tissue sarcomas.

Soft tissue sarcomas(STS), a rare heterogenous group of neoplasm, can arise from striated muscle cells (53%) and are called as rhabdomyosarcomas and remaining group (47%) consists of a heterogenous collection of subtypes referred to as nonrhabdomyosarcoma soft tissue sarcomas (NRSTS).[1,2] There are three modalities of treating patients with STS. These are surgery, radiation therapy for control of residual bulk or microscopic tumor and systemic combination chemotherapy for primary cytoreduction and eradication of gross and micrometastases. Surgery includes complete resection of the primary tumor with surrounding margins of uninvolved tissue during the initial surgery and any subsequent operation. Debulking procedures have no value as initial biopsy and neo-adjuvant therapy results in shrinkage of the tumor allowing complete resection at second look operation. [3,4] However, approximately 40% to 50% of patients eventually develop distant metastases, primarily in the lung. [3-5] In these instances the potential for cure drastically decreases and the 5-year survival ranges from 25% to 30% in spite of aggressive surgical management of metastases.[3-5]

The objective of the current study was to review cases of softtissue sarcoma to gain insight into the presentation, treatments and outcomes for this rare disease and to determine various factors associated with outcomes.

This descriptive, cross sectional study of histologically confirmed cases of soft tissue sarcoma seen at Rajendra Institute Of Medical Sciences, Ranchi was conducted over a period of 2years between Jan 2012 and Dec. 2014. The charts of the patients with diagnosis of the sarcoma were reviewed after formal approval from the Institutional Ethical Review Board. Only adult patients with age of more than 16 years were included. The data was analyzed in SPSS version 16.0. The descriptive analysis was done for the demographics and clinical characteristics of the patients. The Chi square test was applied for univariate analysis for determining the significance of individual categorical variables for recurrence.

A total of 30 cases were studied. Male to female ratio was 4:1. Mean age of presentation was 46.5 ± 9.2 years. Most common site was lower limb (46.7%) followed by upper limb(16.7%).
[Figure-1] The vast majority of patients (56.7%) presented with large tumors of ≥10 cm in diameter. [Figure- 2] The soft tissue sarcomas included Synovial sarcoma, Leiomyosarcoma, Fibrosarcoma, Liposarcoma and other rare sarcomas. The Liposarcoma was found in 9 patients (30%), followed by Fibrosarcoma 7 patients (23.3%), MFH in 6 patients (20%), Rhabdomyosarcoma in 4 patients ( 13.3%) and the other rare sarcomas in less than 13% of the cases. (Figure 3 Pie chart) Only 46.7 % patients had localised disease at the time of presentation , lymph node metastasis at the time of diagnosis was recorded in 23.3% of cases and distant metastasis was present in 30% cases. The median follow up duration was 44 months (18-72 months).
Localised disease with or without metastasis was present in 21 cases, out of which 16 underwent wide local excision, 4 had debulking and 1 patient had amputation. 9 patients presented with distant metastasis and two of them underwent amputation due to gangrene. [ Figure- 4]. Local recurrence was seen in five cases and at the end of three years 17 patients were alive.

Sarcomas represent the heterogeneous group of cancer with diverse tumour biology. Wide local surgical resection with pathologically proven negative margins is the most effective therapeutic approach for cure of soft tissue sarcoma.
Most common sites for hematogenous dissemination are the lungs and the liver.[4,6] Regional lymph node metastases are uncommon. The majority of tumors are intermediate and high grade and the most common histologies are liposarcoma and leiomyosarcoma. Other histologies include malignant fibrous histiocytoma (MFH), malignant peripheral nerve sheath tumor (MPNST), rhabdomyosarcoma, Ewing sarcoma, synovial sarcoma, hemangiopericytoma, and fibrosarcoma.[4,6] History and physical examination, computed tomography (CT) and/or magnetic resonance imaging (MRI) to evaluate the primary tumor and regional lymph nodes, and CT scans of the chest and liver to detect possible distant metastases are initial diagnostic modalities. In presence of symptoms, MRI brain and bone scans are indicated. Biopsy should be reserved for patients who are being considered for preoperative radiotherapy (RT) and/or chemotherapy, patients who have inoperable disease, and patients with hematogenous metastases. If surgery is the initial treatment, then a tissue diagnosis may be obtained at the time of the definitive procedure.

Patients with STS are staged according to the American Joint Committee on Cancer (AJCC) staging system [7].

Similarly, the Musculoskeletal Tumor Staging System stratification is determined by histologic grade as nearly all tumors are deep [8]. The mainstay of treatment for patients with STS is surgery. We primarily see patients with high grade tumours referred for adjuvant chemotherapy or for palliative chemotherapy in unresectable cases. Adjuvant chemotherapy have demonstrated a reduction in local and distant recurrence rate and trend towards improved overall survival with adjuvant chemotherapy [9]. Addition of ifosfamide to doxorubicin-based regimens may have a somewhat higher antitumor activity on patients with advanced or metastatic soft-tissue sarcoma[10,11,12]. Radiotherapy has also been used for improving the local control both before and after surgery depending on the individual case of high grade and large soft tissue sarcoma [13].

The treatment of patients with STS remains challenging. A substantial subset of patients have incompletely resectable disease, and marginal margins are achieved in the majority of patients who undergo macroscopic total resection with a subsequent high likelihood of local recurrence. 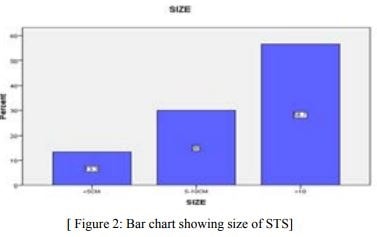 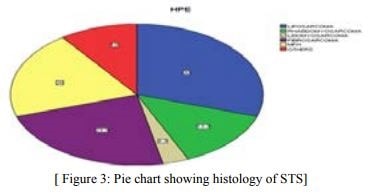 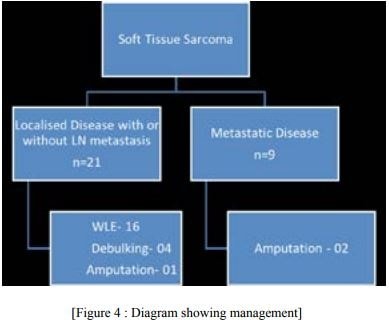