Ischemic heart disease (IHD) continuous to take the leading position in the world as the cause of death and early disablement of persons able to work, in spite of active introduction of modern methods of diagnostics and treatment. Stents introduction with drug covering allows to show the priority of endovascular surgery in the chose of the methods of the coronary artery passage restoration. In spite of the endovascular surgery progress high percents of complications stays after percutaneous coronary angioplasty. Therefore, the determination of new biochemical markers of early diagnosis, progression and complication of IHD it is the actual question of modern cardiology.

One of the directions of modern biochemistry is the determination of the role of extracellular purines in the development of various pathological conditions. The main purines are adenine and guanine. Xanthine and hypoxanthine are intermediates in the adenine and guanine metabolism. The final product of purines catabolism is uric acid. Activity of purines connected with activation of different specific receptors in the heart mussel, vessels and other organs and tissues.

According to the literature data, different types of P2Y receptors are found in the healthy heart and some of them take place in the development of heart failure. In addition, according to results of some scientific investigations, hyperuricemia is the initiator of aseptic inflammation [6,7]. The ability of hyperuricemia to have an adverse effect to the vascular wall and to the system of hemostasis has been noted [5]. Therefore, the involvement of other intermediates of purine catabolism in the mechanism of ischemic heart disease development can be possible . The aim of the research is to evaluate the diagnostic significance of the purine catabolites in blood plasma in patients with coronary heart disease.

35 patients in age from 40 to 75 years old with IHD were examined. Concentration of guanine, hypoxanthine, adenine, xanthine and uric acid were determined. The control group consisted of 30 healthy individuals of the similar age. Venous blood in amount of 5 ml was used as a research material. The blood was stabilized by heparin. Metabolites of purine metabolism were determined by the method of Oreshnikov E.V. and co-authors (2008) [8].The patients with such comorbidities as diabetes melitus, chronic obstructive pulmonary diseases, chronic rheumatic fever, cancer, gout and renal failure was excluded from the scientific investigation. Statistical analysis of the data was performed using the software package STATISTICA Version 8.0. 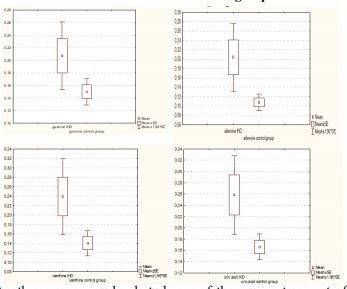 Figure 1. Analysis of plasma purine concentration in patients with ischemic heart disease and in control group.

Another reason may be desturbance of the reverse transport of purine nucleotides and intermediates of their catabolism into the cells, which is caused by disturbance of their capture by specific receptors on the cell membranes.
Uric acid and xanthine are inducers of vascular endothelial damage, which in turn contributes to the progression of atherosclerosis and aggravates the course of IHD.

The increase of purine catabolites concentration is prognostically unfavorable factor, because of purine bases take part in progression of atherothrombosis and angiogenesis.
In this regard, changes of xanthine oxidase activity and concentration of intermediates of purine metabolism can be used as a markers of progression of the atherosclerotic process and development of complications of IHD.