78 year old male presented to us with syncope and was found to have sick sinus syndrome in form of tachy-brady syndrome with intermittent atrial fibrillation. After pacemaker implantation, he was discharged on 3mg of warfarin for prevention of stroke. At time of discharge his baseline INR was 1.12. After 3 days of discharge, he developed painful ecchymosis over both lower limbs which progressed to hemorrhagic bullae and finally to eschar formation with central necrosis seen within 5 days (Figure 1). The INR at that time was 1.03. The diagnosis of Warfarin induced skin necrosis (WISN) was made. His warfarin was stopped for 4 days. After starting local wound care, lesions started improving. For stroke prevention, finally he was started on dabigatran 110mg twice a day. 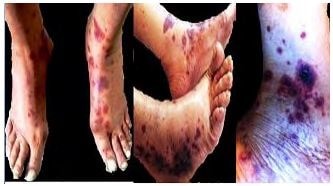 Skin necrosis occurs in 0.01% to 0.1% of patients receiving warfarin.1 Skin reactions associated with warfarin commonly occur 3 to 5 days after initiating treatment and are more common in protein C and protein S deficient patients. Warfarin inactivates vitamin K-dependent “clotting factors II, VII, IX, and X” and “natural anticoagulants, Proteins C and Protein S”. The Protein C and Protein S are inactivated immediately after starting warfarin because of short half life. This may cause a paradoxical hypercoagulable milieu in which microthrombi develop in cutaneous and subcutaneous microvasculature.1-3. This led to skin necrosis mostly over fatty areas. Treatment involves discontinuation of warfarin and reversal with vitamin K if needed. An alternative anticoagulant, such as heparin or LMWH, should be given to patients with thrombosis. Protein C concentrates may accelerate healing of skin lesion in protein C deficient patient; FFP may be value for those with protein S deficiency. Warfarin should be restarted at low doses with overlapping with parenteral anticoagulant and should be continued until the INR is in therapeutic range for at least 2 to 3 consecutive days.