Aim: Aim of this invitro study is to compare the antimicrobial activity of Theobromine containing kids tooth paste and two commercially available kids toothpastes.
Abstract: A chocolate based tooth paste, Theobromine (Group A) and two commercially available kids paste, Colgate kids (Group-B) and Kidodent (Group C) were used in this study. Freeze-dried stock culture of the strains of Streptococcus mutans, Lactobacillus acidophilus, Enterococcus faecalis were cultured in their respective selective media. Dentifrices were added to the wells puched out in the culture media and after incubation, the zones of inhibition were measured to find out the antimicrobial activity.
Results: Theobromine showed a greater zone of inhibition which is statistically significant when compared to the other two pastes.
Conclusion: Toothpaste containing theobromine containing toothpaste as shows higher antimicrobial effect against streptococcus mutans, lactobacillus acidophilus and enterococcus faecalis.

Dental caries is a common chronic disease, arising from interplay between oral flora, teeth, and diet. The interaction between these three primary factors over a specified time period is essential for the initiation and progression of caries. Hence, if any one of the factors is eliminated or reduced, the prevalence of dental caries can be reduced. Microorganisms which are capable of converting sucrose to lactic acid such as Streptococcus mutans, Lactobacillus, and enterococcus faecalis colonizing the oral cavity, is considered to be associated with initiation of dental caries.1

Diet and change in food habits from traditional food to junk food also plays a major role in the initiation of dental caries. Chocolate being the king of junk foods, a common misconception is that, it is one of the main culprit for causing dental caries. But the truth being, among all cariogenic substance, chocolate does not top the list. Also, the good aspect of chocolate which is derived from cocoa bean is also contains substances which are anticariogenic.

Theobromine is one such major constituent in cocoa bean and found in higher concentration in dark than in milk chocolate. Since plaque control forms the basis for caries prevention, the type of toothpaste and its constituents becomes more important. The success of any toothpaste in part, lies on its ability to eliminate pathogenic oral microflora. Toothpaste containing fluoride had been shown to exhibit antimicrobial activity.3 similarly some studies have shown that Cocoa bean husk extract is highly effective in reducing mutans streptococci counts and plaque deposition when used as a mouthrinse by children.4 Also the Chocolate antimicrobial solution consisting of Cocoa Bean Husk was proved to be effective toothbrush decontaminant.5 However, there are no prior studies regarding the antimicrobial efficacy of cocoa bean husk (theobromine) in toothpaste.

So the purpose of this study is to compare and evaluate the anti - microbial efficacy of toothpaste containing theobromine and other two commercial kid’s toothpaste.

Freeze-dried stock culture of the reference strains of streptococcus mutans, lactobacillus acidophilus, and enterococcus faecalis were used for the study. The organisms were cultured in trypticase soy broth and transferred to the selective media to revive from the stock. All the microorganisms such as streptococcus mutans, lactobacillus acidophilus, enterococcus faecalis was cultured in muller hinton agar

The purity of each test stain was checked during each trial by using subculture, gram stain, and colony morphology. Antimicrobial susceptibility was checked by using the ditch method. The Muller Hinton agar was used to demonstrate the antimicrobial effect on aerobes.3

Three wells (4mm in diameter and 3mm deep) were made using a sterile metallic template in each plate. The agar plates were streaked with the respective stock culture microorganisms. Using a sterile spoon excavator, the toothpastes were dispersed into the wells and the plates were incubated at 370C for 48 hours.

After incubation, zones of inhibition were examined, which appeared as a clear, circular halo surrounding the wells (figure 1,2,3) that contained the dentifrice. Diameters of the zone of inhibition were measured with Hi Antibiotic Zone Scale. The mean diameter of the zone of inhibition (in mm) represented the inhibition value of the tested product. The test was repeated six times in triplicate to overcome any technical errors that might have occurred during a single attempt. Measurements were tabulated and subjected to statistical analysis to know the significance.3

The results showed that the toothpaste containing theobromine showed greater mean zone of inhibition when compared to other pastes for all the three tested microorganisms.

Theobromine showed statistically significant (P<0.001) higher antimicrobial activity against streptococcus mutans and lactobacillus acidophilus when compared to other toothpastes. Where as in enterococcous feacalis shows lesser activity when compared to kidodent (group C) 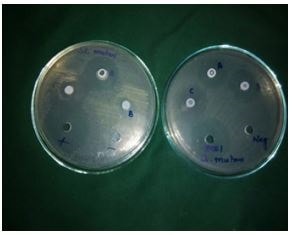 Fig 1:Zone of inhibition as observed in streptococcus mutans for toothpastes A, B, and C. 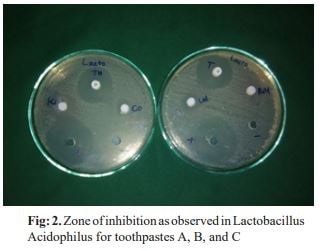 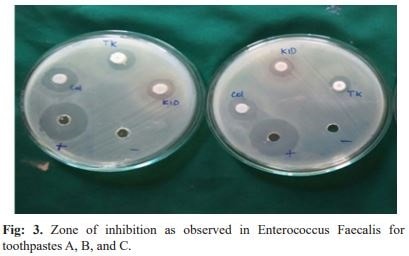 The cocoa bean husk is a waste material in the chocolate industry known to contain a large amount of polyphenols and dietary fibers, such as cellulose, pectin, lenin. Cocoa bean husk is separated from the pre-roasted beans of theobroma cocoa. The cocoa bean husk has been shown to possess two types of cariostatic substances, one showing anti-glucosyltransferase (GTF) activity and the other antibacterial activity6. Theobromine is one of the major constituent in the cocoa bean. Theobromine (theobromide), which was previously known as xantheose, is a bitter alkaloid of the cocoa plant. It is also found in the leaves of the tea plant, and the kola (or cola) nut. It is in the methylxanthine class of chemical compound which also includes the similar compounds like theophylline and caffeine. Cocoa bean naturally contain 1–4% theobromine. The amount of the theobromine in cocoa powder ranges from 1.2%- 2.4% higher concentrations of theobromine is found in dark than in milk chocolate.6

The streptococcus mutans microorganism produces 3 types of glucosyltransferase (GTFB, GTFC, and GTFD), and synthesize an adherent and water insoluble glycan from sucrose, which causes the organisms to adhere firmly to the tooth surface. The adherent glycan also contributes to the formation of dental plaque, in which the accumulation of acids leads to localized decalcification of the enamel surface. Cocoa bean husk extract is said to contain, higher molecular- weight polyphenolic compounds which is said to have strong anti-glycosyltranseferase property. Apart from this it contains unsaturated free fatty acids, such as oleic and linoleic acids, which exhibit antibacterial activity against S. mutans. The cariostatic property of the cocoa bean husk is due to these biologically active constituents.6

Theobromine is more active in hydrated silica, glycerin and xylitol. “Xylitol is a sweetener that has garnered a lot of attention in oral care because it selects the good bacteria in the mouth. The bad bacteria can’t metabolize that sugar. Sodium bicarbonate, known to neutralize bacterial acids in the mouth, and titanium dioxide as a whitening agent and slight abrasive to help clean the surface of the tooth. “The titanium dioxide removes the bacteria and proteins that stick to the tooth and prepares the tooth for [the active] to work more effectively. The two formulations are the same, save for the higher dose of active in one, which addresses compromised or weak enamel and extreme tooth sensitivity.11

Cocoa bean husk extract rinse is highly effective in reducing mutans streptococci counts and plaque accumulation when used as mouth rinse by children. Though no side effects were observed, the common complaint expressed by the children was bitter taste of the rinse. Addition of noncariogenic sugar substitutes should make it more acceptable, especially for children.4 Hence theobromine can be incorporated in chocolates, chewing gum, beverages, mouthwash and toothpaste to prevent dental caries.

Venkateshbabu et al reported that cocoa bean husk extract mouth rinse can be used as an alternate to chlorhexidine mouth rinse as they both have same antimicrobial effect and evades the side effects of later.12

Based on composition, majority of the antimicrobial effects of commercially available kid’s toothpastes are attributed to fluoride content, in the form of sodium monofluorophosphate (concentration of 495ppm). The theobromine used in the present study has no added fluoride content and it showed statistically significant antimicrobial efficacy when compared to other fluoridated kids toothpaste.