The Effect of Apple Cider Vinegar (ACV) as an Antifungal in a Diabetic Patient (Type II Diabetes ) with Intraoral Candidosis (A Case Report).

Diabetes mellitus is a well known metabolic disorder which is characterized by elevated blood glucose levels. It can cause many complications, e.g., cardiovascular disease, chronic kidney failure, the affection of vision and infections. There is a strong relation between the oral health and diabetes. This relation is represented in several forms such as flourishing of candidal infection, gingivitis or peridontitis. Several studies proved that Candida is more frequent in diabetic patients than healthy subjects. The prologoned use of the regular antifungal drugs created a kind of resistance against this drugs. This resistance towards several antifungal drugs required the search for another potent and available substitutes. In this case report, the investigator tried to use Apple Cider Vinegar (ACV) as an alternative antifungal drug to treat intraoral candida on the dorsal surface of a 69-year-old patient suffering from Type II diabetes mellitus. The ACV was given for seven days, twice per day. A swab for the candida was taken before and after treatment. Upon counting the candida, it showed a remarkable drop in count from 100/cm² before the therapy to 6/cm² post therapy. The result was the reduction in the candidal count by 94%. Therefore, the study concluded the high potency of ACV in acting as an antimicrobial and as an antifungal. It was also a natural and safe to be used with Type II diabetes patient

Diabetes Mellitus (DM) is considered one of the most common endocrine, metabolic disease. It is characterized by the abnormal metabolism of carbohydrate, protein, and fat due to either decreased insulin secretion or altered insulin activity. Its occurrence has increased worldwide. In the United States, there are 14 million patients suffering from DM, and this number increases each year by about 700,000each year [1]. There are three major categories of diabetes: Type I, also known as insulin dependent diabetes mellitus (IDDM) which results from insulin deficiency. Type II results due to insulin resistance and altered insulin secretion; it is also known as non- insulin dependent diabetes mellitus (NIDDM). The third type is known as gestational diabetes which usually occurs during pregnancy as a result of glucose intolerance [2]. The difference between Type I and Type II; is that Type I is characterized by the rapid onset of symptoms such as polyuria, polyphagia, polydipsia, irritability, fatigue in addition to weight loss. On the other hand symptoms of Type II develop slower than type I, affected patients suffer from obesity, and other complications due to micro and macro-vascular changes that affect various body organs. These complications can lead to retinopathy; causing blurred vision, neuropathy, nephropathy, atherosclerosis, in addition to recurrent infections and impaired wound healing[3,4].

Diabetes mellitus is related to multiple oral complications, for instance, gingivitis, periodontitis, diminished salivary secretion (xerostomia) and burning mouth syndrome. It can also be coupled with other conditions like oral lichen planus and hypertension causing a syndrome known as Grinspan’s Syndrome [5]. Diabetes mellitus has been strongly related to the most common intraoral pathogenic disorder; which is oral candidosis. This role has been attributed to the fact that the increase in glucose levels in both saliva and gingival crevicular fluid(GCF) creates an acidogenic media which leads to the flourishing of the Candida Albicans Species. This acidogenic media increases the adhesion of the candida leading to the formation of oral biofilm [6].Among the reasons that make diabetic patients are more susceptible to candida infections, is due to the host immunosuppression as a result of impaired polymorphonuclear leukocyte (PMNL) chemotaxis and phagocytosis [7]. Oral candidiasis is one of the most common opportunistic fungal infections that usually affect immune-compromised individuals. It is also known as oral thrush or oral candidosis. Its signs and symptoms are mostly loss of taste sensation, discomfort and pain together with the loss of appetite. The prime causative organism is Candida albicans, which exists as a commensal in 30-50% of the population. It turns into a pathogenic organism under certain conditions, e.g. prolonged use of antibiotics, xerostomia, denture wearers, or patients with HIV [8].

The pathogenicity of Candida albicans depends on its release to specific virulence factors, such as proteinase and phospholipase enzymes that lead to further adherence to the tissues and subsequent invasion of the host bloodstream. Also, these virulence factors lead to the switching from the yeast form to the hyphae form [9]. Vinegars are natural acidic condiments that can be produced from grains, e.g. wheat and rice or it can also be produced from fruits, e.g. apples, or grapes [10]. Regardless the origin of their raw materials; vinegars have multiple physiological functions [11]. Along the previous centuries, several Chinese books discussed the use of grain vinegars in several medical conditions like the treatment of burns, cellulitis and psoriasis [12]. Recent studies have suggested the use of fruit vinegars in the treatment of cases of stomachache, fever, laryngitis, and swelling. This is because of their antioxidant, antibacterial, lipid metabolism regulation, blood glucose properties [11]. According to the fact that vinegars can have a potent antimicrobial, and also the fact that candidal infections are increasingly resistant to the traditional antifungal drugs. It was worth giving the apple cider vinegar (ACV) a chance to treat the intraoral candida case that was introduced to the dental office.

A 69-year-old man has been referred to private dental practice with a chief complain of burning sensation of the tongue, loss of taste sensation with nausea associated with eating. The patient went through the following accurate examination:

The onset of this condition was sudden, started one day before visiting the dental office, it is presented as itching, and burning sensation of the tongue that was not relieved by any relieving factor and the patient tried to use antiseptic oral mouth (chlorohexidine) but had no effect on the condition

The patient is a controlled diabetic patient (Type II); where his latest serum glucosylated hemoglobin (HbA1c) level was 8.8 %.The patient was only taking his antidiabetic medication of Sulfonylureas (Amaryl)® 4mg/ once daily during breakfast. The patient didn’t report any recent use of antibiotics. He also didn’t mention any other medical condition.

Upon examination of the patient’s tongue: there was a slightly raised, soft, white creamy plaque forming a pseudomembranous candidosis. It was wiped off by a cotton-tipped applicator, leaving an ulcerated and erythematous surface. (Figure 1): 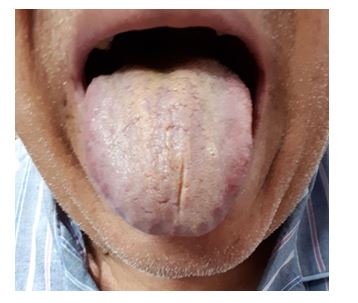 Figure 1: A Photograph that shows oral thrush.
A Sample collection:

A swab was taken from the dorsal surface of the tongue and then was placed in a sterile media to maintain the vitality of the microorganism. The sample was transported to the Microbiology Laboratory of Faculty of Medicine, Cairo University. The sample was immediately cultured on Sabouraud Dextrose Agar (SDA) by using the streaking method described by Pollack et al. (2002) [13]. The sample was then incubated anaerobically for 48 hours at a temperature of 37ᵒC. After the incubation, the isolated colonies were transferred to a sterile nutrient broth at 37ᵒC for identification. The growth of Candida Albicans was presented by multiple white smooth and creamy dots. Upon counting the number of the microorganism, there were 100/cm². ( Figure 2). 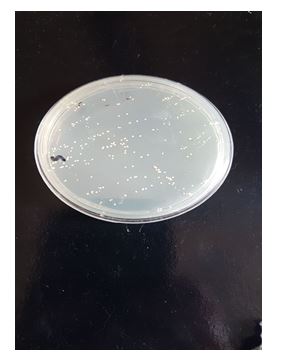 The patient was suggested to use a natural and safe medication for the oral thrush. This medication was given in the form of Apple Cider Vinegar containing 5% acetic acid that was placed in a dropper. The patient was advised to add few drops on the tongue twice daily after breakfast and before bedtime. This regimen was carried out for seven days. After the seven days were over another photograph was taken to the patient’s tongue (Figure 3), and another swab was taken to count the number of isolated candida post-therapy. (Figure 4). Before the beginning of this case report, the patient signed a consent form that was checked by the Research Ethics Committee of Faculty of Dentistry, Cairo University. This study had the code number 171016. 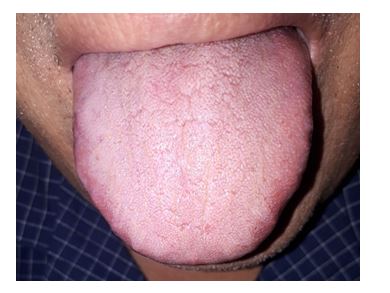 Figure 3: A photograph showing the dorsal surface of the tongue after seven days of application of 5% ACV 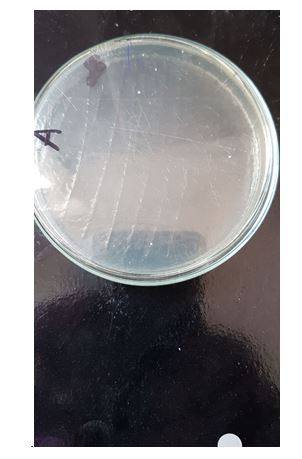 Figure 4: A photograph of Candida Albicans on Sabouraud Dextrose Agar after the ACV treatment (6/cm²).

After evaluating the patient’s condition who had been given ACV 5% acetic acid as an antifungal drug for his tongue candidal infection, a significant drop in the candida count was observed by 94%. This result was surprisingly satisfying for both the patient and the investigator. This result came in accordance with the study that proved the fungistatic property of the ACV of 2.5% maleic acid; where the difference between the fungistatic and fungicidal activity depended on the species isolated [14,15]. In 2013, a study conducted by Hindi [16], proved that ACV strongly inhibited the growth of certain pathogens, e.g. Staphylococcus epidermidis, Proteus mirabilis, and Klebsiella pneumonia. Budak et al. in 2014, also showed that ancient Greeks used fruit vinegars to treat inflammation, infections, cough and in wound healing [11]. The antifungal activity of ACV was attributed to the organic acids which constitute the main ingredient in the vinegar. The mode of antimicrobial action of the organic acids was explained in 2011 by Zhang et al.[17]. These organic acids destroy the outer membrane of the organism cell wall, inhibit the macromolecular synthesis, consume the microbial energy, as well as promote the production of the antimicrobial peptides in the host cells. Also, the antifungal activity of ACV was explained in some studies through the fact that it inhibits that candidal adherence to the smooth surfaces and thus preventing its colonization and the ability to form an oral biofilm [14,18].

Vinegar also can affect the blood glucose levels; this was first described by Ebihara and Nakajima in 1988, who discovered that 2% acetic acid reduced the blood glucose concentration in rats that were given high starch diets [19]. As a result, human dietary studies, later on, were carried out by Ostman el al. in 2005 [20]; Mitrou et al.2010 [21] and showed that the intake of fruit vinegar also reduced the blood glucose levels after starch intake. ACV was proved by Ebihara and Nakajima in 1988, to increase insulin sensitivity in patients with type II diabetes [19]. Also in a 12- week study, the intake of 1.4 grams of acetic acid in the form of two meals per day; remarkably reduced the glycated hemoglobin levels (1.6%) in Type II diabetes patients [22]. The consumption of ACV over a prolonged period; about 100 days can improve insulin resistance in polycystic ovary syndrome patients in addition to the ovulation function regulation [23]. The mechanism by which ACV can regulate the blood glucose level was explained by Petsiu et al. in 2014; as follows: ACV delays the gastric emptying, inhibits the disaccharidase activity in addition to the fact it promotes glycogen production[24]. Several studies also proved the effect of ACV on the regulation of blood lipid levels. The use of 30 ml of ACV twice daily for eight weeks was able to significantly reduce the cholesterol, triglycerides, and LDL and increase the HDL levels in a patient with hyperlipidemia [25]. In a study carried out by Fushimi et al. in 2006, they explained how acetic acid reduced blood lipid levels through the stimulation of oxygenolysis of fatty acids and stimulation of bile secretion [26].

Apple Cider Vinegar (ACV) has a potent antimicrobial and antifungal effect that reduce the count of intraoral candidal infection in a Type II diabetes patient by 94 %. This in addition to the several medicinal uses acting as an antioxidant, regulates blood glucose level and blood lipid levels; which encouraged the operator to suggest such a safe, non –toxic and low-cost remedy that will cause significant and useful results.

The author is thankful to Mrs/ Badr Elzkrawy; technician at Microbiology Department, Faculty of Medicine, Cairo University. Her meticulous and hard work with the samples made this study possible.