Freshly harvested and fully matured guava fruits (Lucknow-49) were hydro-cooled at 2 ±1 °C for 10 min and pretreated with different treatments viz., calcium chloride (2 %), hydrogen peroxide (1 %), benomyl (0.1 %), neem oil (2 %), lemon grass oil (0.2 %), cinnamon oil (4 %) and ozone (150 mg/h). Fruits were packed in 50 µm LDPE bags and stored at 10 ± 1 o C. Control fruits without any pre-treatment were stored at low as well as room temperature. The biochemical, sensory and microbial parameters of the guava fruit were recorded at 5 days interval during storage. Minimum TSS (14.1 o Brix) and total sugar (8.94 %) were observed in ozone treatment while maximum titratable acidity (1.13 %) and ascorbic acid (236 mg/100 g) was observed in ozone treatment on 30 days of storage. Maximum sensory score was found in ozone and in cinnamon oil treatments. Microbial parameters viz., total plate count, E.coli, salmonella and yeast and mould in the fruit were found absent for ozone, cinnamon oil, neem oil and hydrogen peroxide treatments. Maximum changes in biochemical, sensory and microbial parameters were found in control at room temperature followed by control at low temperature. Shelf life of guava fruit could be increased up to 30 days with minimum changes in biochemical, sensory and microbial parameters when the fruits pretreated with ozone (150 mg/h) followed by packaging in 50 µm LDPE bags at 10 ± 1 o C storage temperature.

India is the largest producer of the guava fruit (Psidium Guajava L.) in the world. Guava being climacteric fruit, it has very short shelf life and marketing of fresh fruits to distant places is very difficult. The short harvesting season, limited domestic demand and improper storage facility creates glut in the market and consequently loss to the fruit growers. Due to its short shelf-life, as much as 18-20 % of fruits perish as post-harvest losses during different post-harvest operations (Anon., 2014). Pre-storage treatments viz., pre-cooling, certain chemicals, plant extracts (essential oils), inhibitors, ozonation or combination prior to packaging and storage play an important role to control insect pests, yeast and mould on the food surface; prevent bacterial and fungal rots; destroy pesticides and chemical residues which ultimately leads to improve the shelf life of fruits.

Chemicals have been widely used to reduce the incidence of post-harvest disease. Although effective, many of these materials have been removed from the market in recent years because of economic, environmental or health concerns. These problems associated with the use of chemicals have stimulated the produce industry to identify alternative treatments equivalent to chlorine in antimicrobial effectiveness. The plant extracts are generally assumed to be more acceptable and less hazardous than synthetic compounds for preventing fungal decay in organic fruits after harvest which is a novel preservation approaches. Ozonation is a noble technology that can be used to sanitize produce. A naturally occurring molecule, ozone is a powerful disinfectant. The potential utility of ozone in the produce industry depends on the fact that as an oxidizing agent, it is 1.5 times stronger than chlorine and is effective over a much wider spectrum of microorganisms than chlorine and other disinfectants.

At present no specific pre-treatment technique is followed for guava fruit to control insect pests, bacterial and fungal rots on the food surface as well as destruction of pesticides and chemical residues prior to packaging and storage. However good pre-treatment before storage reduces post-harvest losses, preserves quality and prolongs the shelf life of fresh guava fruit to fulfill the consumers and market demand. International markets reject fruits and vegetables containing unauthorized pesticides, with pesticide residues exceeding permissible limits and with inadequate labeling and packaging. Obviously, post-harvest management determines food quality and safety, competitiveness in the market and the profits earned by producers.

Total soluble solids (TSS) was measured by hand refractometer (range 0-90 %) and corrected at 20o C. Total sugar was determined by phenol sulphuric acid method as reported by Sadasivam and Manikam, while ascorbic acid and titratable acidity was estimated as reported by Ranganna.

Sensory characteristic in terms of overall acceptability of guava fruit was evaluated on the basis of appearance, pulp colour and taste after ripening of the fruits at room temperature (30 ± 2 o C) for two days by covering gunny bag. Sensory characteristics of ripe fruits were evaluated by a panel of semi trained 10 judges using 9 point hedonic scale (Amerine et al., 1965).

The observations taken for various parameters of guava fruits at 5 days interval during storage were subjected to analysis of variance technique considering Completely Randomized Design with four replications. All the treatments of the experiment were compared at 5 per cent level of significance. The analysis of variance (ANOVA), standard error of mean (SEM), critical difference (CD), coefficient of variance (CV) and mean values were tabulated and the level of significance was reported as suggested by Panse and Sukhatme (1985). 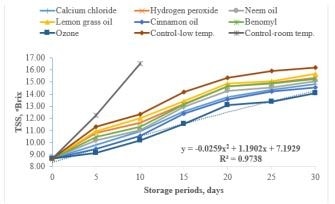 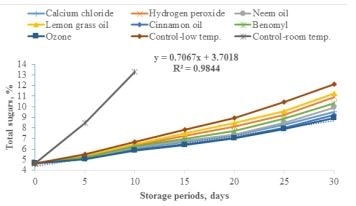 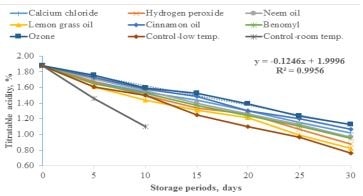 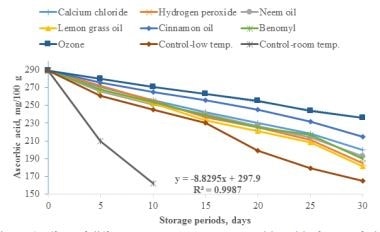 From the Table 1, it is clear that maximum sensory score of guava fruit (7.6) was observed in ozone and cinnamon oil treatments while minimum score of overall acceptability was recorded in control at room temperature (4.5) followed by control at low temperature (5.3) at the end of the storage period. These results are in conformity with the results reported by Antala et al. (2014) in guava. 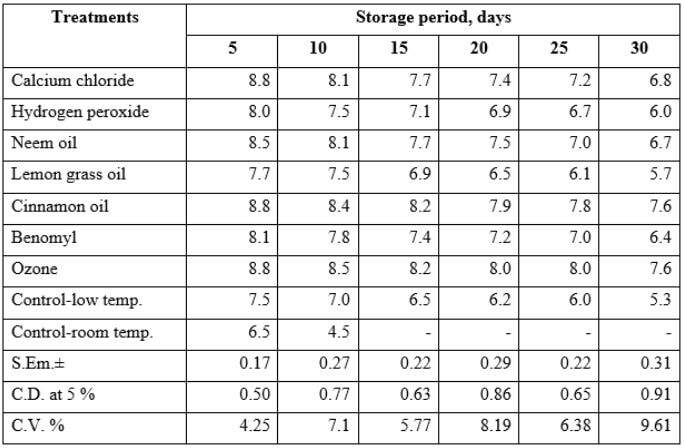 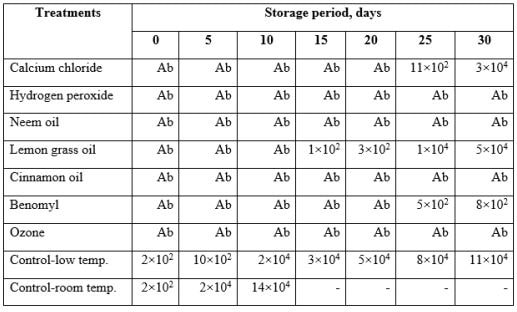 The effect of different pre-treatments on E.coli of guava fruit during storage is presented in Table 3. E.coli was not observed after and before pre-treatments at an initial stage including control. E.coli was found present in lemon grass oil (1×102 cfu/g) and control at low temperature (3×102 cfu/g) on 30 days of storage. It was also found in control at room temperature (2×104 cfu/g) on 10 days of storage. Similar findings for E.coli were also reported by Achen and Yousef (2001) in apple.

Table 3 Effect of different pre-treatments on E.coli (cfu/g) of guava fruits during storage 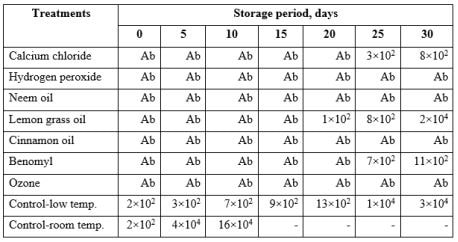 It may be concluded that ozone treatment (150 mg/h) followed by packaging in 50 µm LDPE bags at low temperature storage retained shelf life of fresh guava fruit up to 30 days with minimum change in biochemical, sensory and microbial parameters of the fruit.