Silky fowl are a breed of chicken that have been designated a natural treasure in Japan. Each hen lays only about 40 eggs per year, making the eggs highly valued. Throughout the Asian continent, silky fowl and their eggs are used in medicinal cooking. From an academic viewpoint, a modern scientific approach has only recently been applied to determine their medicinal, chemical, and biochemical components[1-6]. Almost no sitological or nutritional studies have been conducted on silky fowl eggs.

We previously studied silky fowl eggs from a sitology perspective, examining a variety of phenomena induced during bread fermentation and baking, and reported new findings based on these studies[7-12]. Most of the studies focused on fat as the main nutritional ingredient, and the sitological functional properties of silky fowl egg albumen have yet to be determined.

The purpose of the present study was to examine silky fowl egg albumen and to clarify its sitological functional properties. We therefore thought it would be preferable to examine sitological phenomena throughout the entire breadmaking process for basic research materials. As a first step, we studied the sitological effects of Silky fowl egg whites on various aspects of breadmaking. We herein report our findings.

Eggs of silky fowl and hen’s were a kind gift from Canaly 21 (Co., Ltd., Gifu, Japan). Each fresh egg fraction was obtained from the eggs collected within a day after laying and immediately used for these experiments. Eggs were collected from flocks of 20 silky fowls and 20 hens. A total of 10 dough were made, two eggs being included in each dough. The same feed was given to the silky fowls and hen’s and they were kept under the same environmental conditions.

Preparation of egg albumen of silky fowl and hen’ Eggs:

Measurement of the amount of egg whites proteins:

The amount of egg albumen was measured by the Lowry et al., method[13].

Bread dough was prepared using commercially available ingredients for preparing bread dough and by employing the straight dough method. More specifically, dough was prepared using ingredients for preparing a loaf of bread, i.e., lipid, strong flour, live yeast, water, sugar, salt and skimmed milk powder. The added egg albumen was 0-30%. Dough temperature at the completion of mixing was 26 o C, and the dough was fermented for 90 min at a temperature of 28 to 30 o C. The dough was then molded, and the molded pieces were subjected to final fermentation for 60 to 70 min at a temperature of 36 o C and a humidity of 75%, followed by baking for 35 to 40 min at temperatures of 230 o C (top of oven) to 210 o C (bottom of oven). Dough subjected to only primary fermentation was also used in this experiment. For each type of bird egg, 5 replicate bread dough were prepared. Each bread dough was made from two eggs, which had been laid different birds.

Gluten was separated from bread dough samples as follow; bread dough was then removed in a sieve and washed with distilled water for 20 min by hand until the gluten was obtained. After washing, the gluten was frozen in liquid nitrogen and freeze-dried. The freeze-dried gluten was ground and sieved using a 250 um sieve. This sample (100g) was defatted (four times) with 500 ml of chloroform under magnetic stirring for 20 min, filtered under vacuum, then dried in an air cupboard overnight.

Hardness and adhesion of dough were measured using a rheometer (TPU-2S, YAMADEN Co., Ltd., Japan). A dough set into a rheometer cell of 42 mm across and 16 mm high. The cylinder type plunger of a diameter of 15 mm compressed into the bread in the cell at 5 mm intervals and at a compression rate of 1 mm a second. Quarterly does it mean four trials on trials on each sample were carried out within 5 minutes of each other. Each value represents the mean ± standard deviation.

Measurement of the rate of dough expansion:

For the rate of dough expansion with fermentation, a fixed amount of dough was placed in a graduated cylinder and fermented in an incubator (temperature 30°C, humidity 75%), and the rate of expansion in a fixed time was measured. 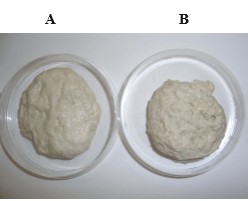 A set amount of albumen fraction harvested from each type of egg was added to dough during mixing. One example of only crude gluten extracted from bread dough is shown in Fig 1. A different crude gluten consistency was observed between the two types of egg. Specifically, silky fowl egg albumen fraction-added gluten (A) had a prominently more lubricious surface than hen’s egg albumen fraction-added gluten (B). This suggests that the type of albumen added had a very large effect on the bread dough and potentially a large effect on the characteristics of the bread while baking and on the finished baked product.

Differences in hardness of albumen fraction added dough during baking: 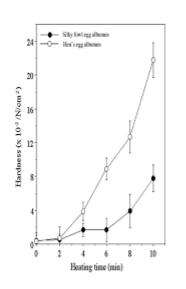 Differences in adhesion of albumen fraction added dough during baking:

We baked bread from dough with a set amount of albumen fraction added to the dough and measured the adhesion over time. The results are shown in Fig. 3. Adhesion tended to decrease with baking time in both types of dough, and no differences were observed in adhesion in the two types of dough after ten minutes of baking. However, a very marked difference in adhesion was observed between the two types of dough between 2 and 6 mins of baking, with adhesion being greater in the silky fowl egg albumen fraction-added dough than in the hen’s egg albumen fraction added dough. This suggests that the added albumen had marked effects during that period. 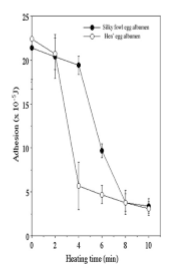 Differences in rising rate between the two types of albumen fraction-added dough during fermentation: 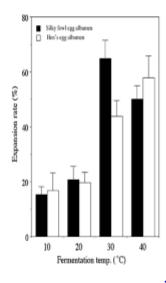 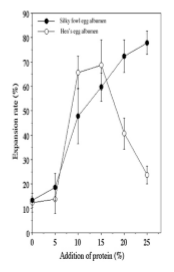 Fig 5: Relationship between the concentration of added egg albumen and expansion rate of dough.

fermentation with a volume of up to 15% added, it tended to decrease with volumes of more than 15%. It is unclear whether this result is due to the different chemical properties of the hen’s egg albumen or simply changes in the volume. Further investigation is needed to clarify this point.

Changes in gluten molecular weight with fermentation of: 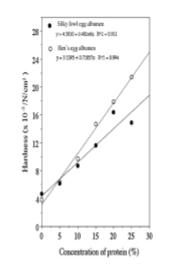 Fig 6: Relationship between the concentration of added egg albumen and hardness of dough. 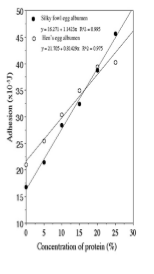 Fig 7: Relationship between the concentration of added egg albumen and adhesion of dough. 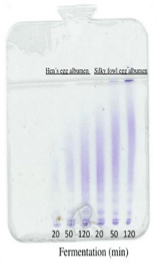 Fig 8: Changes of molecular weight of gluten on the fermentation of dough added egg albumen.

The primary aim of this study was to examine the effects of albumen fraction on the chemical properties of bread dough. We determined that the type of egg added during bread baking greatly affected the distinctive color, flavor and texture of the bread. At the very least, these findings may be useful to the bread making industry for determining one aspect of the unique sitological functional properties of silky fowl eggs.