Background: Infant colic (IC) affects up to 20% of infants in the first 4 months of life. Although IC is a benign affection that spontaneously resolves after the first 3-4 months of life, it is often a stressful problem for parents.
Methods: Babies, aged ≤ 3 months, observed at family pediatrician office because a suspect of IC, were randomized in two groups of 3-week dietary intervention: Group 1, receiving non-analgesic, non-nutritive soothing maneuvers, continuing a standard formula; Group 2, receiving a partially hydrolyzed whey formula (w-pHF), containing GOS (0.5g/100ml), low content of lactose (2.5g/100ml) and low osmolarity (185 mOsm). All infants performed clinical examinations at enrollment and after 7, 14 and 21 days. Number of colic episodes, and the number and consistency of fecal outputs were recorded daily.
Results: Fifty infants with IC were enrolled and randomized: 25 in Group 1 and 25 in Group 2. The rate of infants with IC in Group 2 decreased significantly within 14 days compared to Group 1 and the number of bowel movements increased significantly within 7 days in Group 2 compared to Group 1. Stool consistency significantly improved in Group 2 within 7 days.
Conclusion: The studied formula could represent a useful approach in infants with IC reducing pharmacological treatments.

Infant colic (IC) affects up to 20% of infants in the first 4 months of life (1). Although IC is considered a benign affection that spontaneously resolves after the first 3-4 months of life, it is often a stressful problem for parents. It is associated with maternal depression, early breastfeeding cessation, shaken baby syndrome and milk formula changing(2-5). Despite decades of research, the cause of IC remains elusive. Psychosocial hypotheses include poor maternal-infant interactions, maternal anxiety and depression, and difficult infant temperament. Gastrointestinal theories include increate intra-abdominal gas, hyperperistalsis, and visceral pain(6). A number of therapies have been tried, including use of hydrolyzed formulas, sucrose, herbal teas, soy formula, lactose-reduced formula, and fiber-enriched formulas, increased carrying, music, vibration or massage, and spinal manipulation; however, none has been proven to be effective(7). Alterations in gut microbiota composition have been described in subjects with IC(8,10). The modulation of gut microbiota might help the prevention of IC particularly in formula-fed infants, who have well-known differences in gut microbiota composition compared to breast-fed ones(11). Several reports in literature have shown that oligosaccharides (OS) supplementation in infant formulas may promote a healthy gut microbiota(12). Although potential benefits have been recently underlined by many authors(13-15), the European Society for Paediatric Gastroenterology, Hepatology and Nutrition (ESPGHAN) Committee of Nutrition has concluded that there are only limited published data about prebiotics in dietetic products for infants and that well-designed randomized controlled trials are requested to validate clinical outcome measures of prebiotic effects in infants (16). In this study, we aimed to evaluate the efficacy of a partially hydrolyzed whey formula containing OS on IC in a prospective randomized clinical trial.

A randomized controlled trial (RCT) was conducted in the city area of Naples, Italy, from 1st March to 31th September 2012. The RCT was conducted in collaboration with family pediatricians (FPs), operating, who care for children up to 14 years of age in the Italian Public Health System. Before the start of the study, all FPs involved attended an investigator meeting during which the study protocol was illustrated and discussed, and all procedures and definitions were shared.

The Ethics Committee of the University “Federico II” of Naples approved the study. The trial was conducted in accordance with the Helsinki Declaration (Tokyo revision, 2004), according to the Good Clinical Practice Standards (CPMP/ICH/135/95), and the current Decree-Law 196/2003 regarding personal data and all the requirements set out in the European regulations on this subject.

Otherwise healthy formula-fed infants (aged ≤ 3 months at the beginning of the study) observed by the FPs involved in the trial for the suspicion of IC were considered eligible for the study. Infant colic was defined by the presence of crying or fussing ≥ 3 hours/day for ≥3 days over seven days (7).The FPs consulted the clinical records of each infant for previous diseases and pharmacological treatments. At baseline, the health status of all study subjects was carefully assessed, and the possible presence of infectious diseases or of other morbidities was ruled out by the FPs through a full physical examination including: vital signs (body temperature, pulse rate, respiration rate, blood pressure); neurological status; growth parameters; nutritional status; hydration; skin evaluation; otoscopy; evaluation of oral cavity; respiratory/abdomen/lymphonodes examination; genital examination.

Exclusion criteria were: age >3 months, exclusive or partial breast-feeding, suspected or documented systemic or congenital infections and evidence of significant genetic, cardiac, respiratory, hematological, gastrointestinal, metabolic or other systemic diseases, malformations of gastrointestinal or urinary or respiratory tract, gastrointestinal or urinary or respiratory tract surgery, failure to thrive (weight gain <100 grams/week averaged from birth to the last recorded weight), cystic fibrosis, food allergy, and use of pre/pro/synbiotics or antibiotics in the 2 weeks before the enrolment. Anamnestic, demographic and clinical data were collected by the FPs and reported in a specific clinical chart.

Written informed consent was obtained from the parents/tutors of each subject. Then, according to a randomization list, infants were randomly allocated to one of the two groups of 3-week dietary intervention: Group 1, received non-analgesic, non-nutritive soothing maneuvers and continued the use of a standard formula; Group 2, received the same recommendations plus a partially hydrolyzed whey formula (w-pHF) (Humana Comfort, Humana Milan, Italy) containing GOS (0.5g/100ml), low content of lactose (2.5g/100ml) and low osmolarity (185 mOsm).
Study products were commercially available as formula powder in Italy; the price was the same, and the packaging was very similar. The composition of the study formulas is reported in Table 1. The FPs allocated the next available number on entry into the trial, and instructed parents about the daily amount of the assigned study product, the method of preparation, and how to compile a structured diary to record symptoms. Parents recorded daily the number of IC episodes, and the number and consistency of fecal outputs during the 21 days of study. All infants performed a full clinical examination at enrollment and after 1, 2 and 3 weeks. Adverse reactions were checked at each visit. 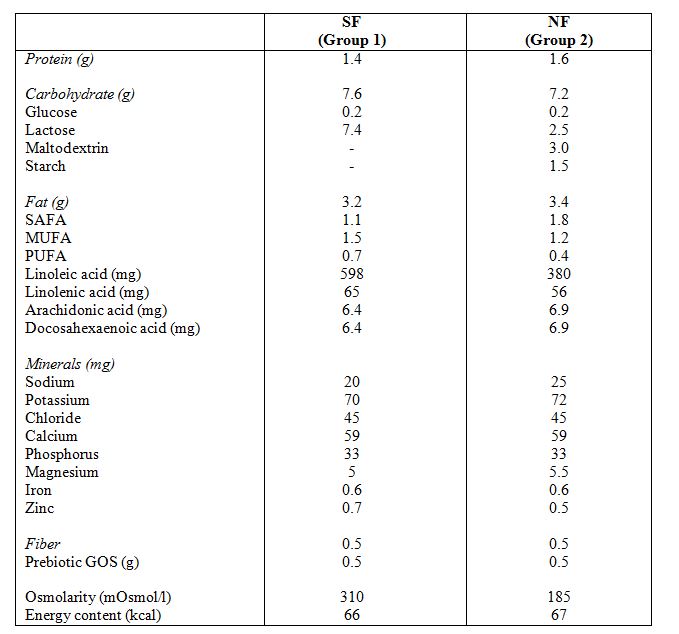 Table 1:Composition per 100 ml of the studied formulas.

Main study outcome was the rate of subject presenting IC after 3 weeks of dietary treatment. Secondary outcomes were the daily number of bowel movements and the stool consistency score (graded as in Bristol scale).

To detect a change of at least 30% in the rate of subjects with diagnosis of IC after 3 weeks of dietary treatment, with a power of 0.85 at an alpha level of 0.05 (Pearson's Chi-square, two-tailed test), and considering a possible drop out, we calculated that 25 children per group were needed. Randomization was based on a list with consecutive numbers with an allocation ratio of 1:1 between Group 1 and Group 2. The software used to generate the randomization list was randomizer.org.

The Kolmogorov-Smirnov test was used to determine whether variables were normally distributed. Data were reported as mean and standard deviation. The χ2 test and Fisher’s exact test were used for categorical variables. We used the t-test to evaluate differences among continuous variables. The level of significance for all statistical tests was 2-sided, p < 0.05. All analyses were conducted by a statistician blinded to patient group assignment, using SPSS, version 16.0 for Windows (SPSS Inc., Chicago, IL, USA).

Fifty-six consecutive infants with IC were assessed for eligibility. Six subjects were excluded because they did not meet inclusion criteria, 50 infants were enrolled and randomized in the two study groups: 25 in Group 1 and 25 in Group 2 (Figure 1). At enrollment, the infants in the two study groups showed similar demographic and clinical characteristics (Table 2). All subjects were formula fed-infants, born at term with a birth weight adequate for gestational age, regular weight gain, weight for length ratios between 10th and 90th percentiles according to the World Health Organization growth charts, and negative physical examination. 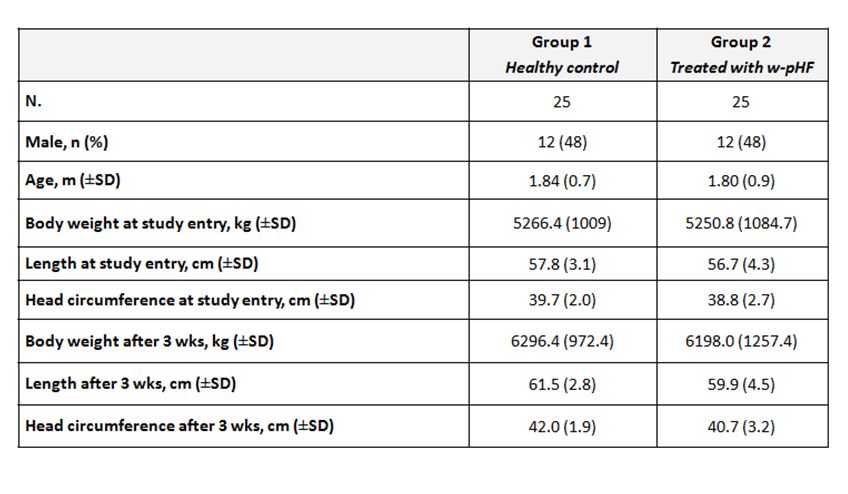 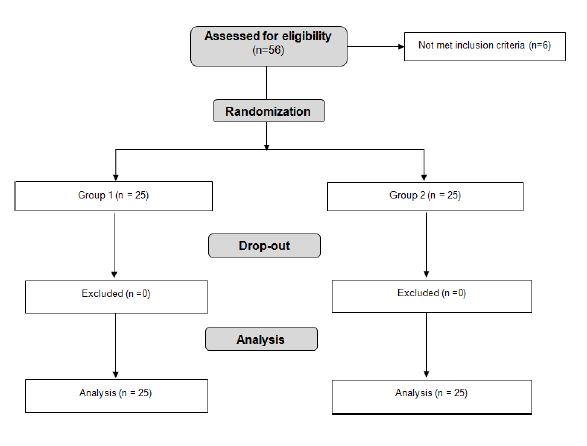 Figure 1: Flow diagram of the trial of dietary intervention for the treatment of infant colic. 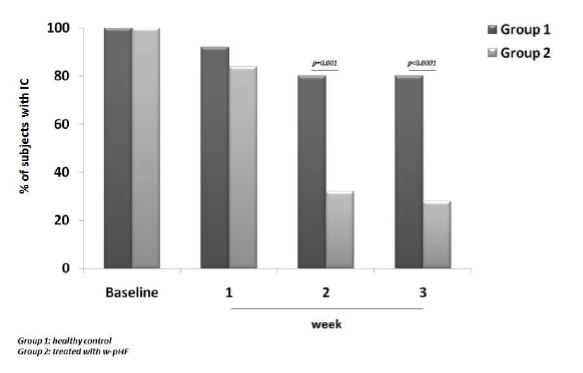 Figure 2: Colic episodes over the course of the study in the two groups 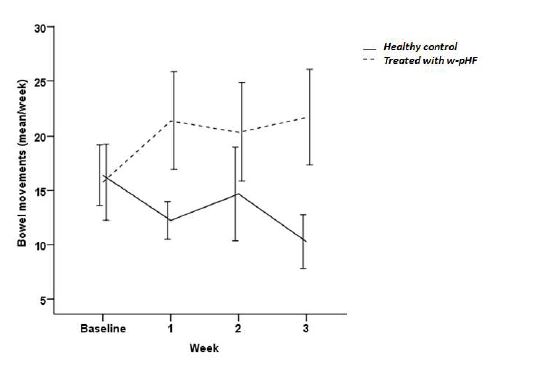 Figure 3: Bowel movements over the course of the study in the two groups. 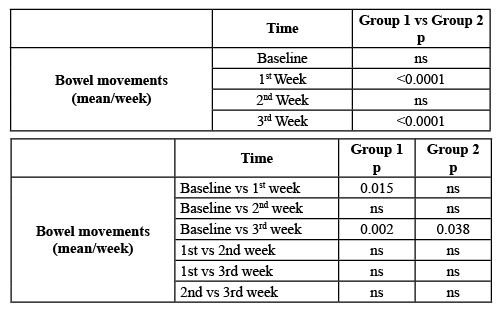 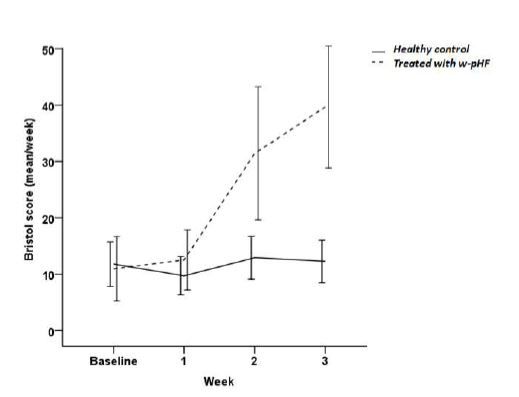 Figure 4: Stool consistency over the course of the study in the two groups. 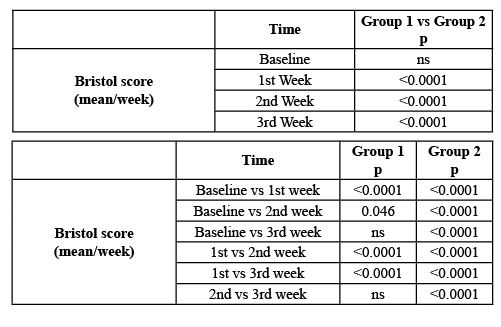 In this RCT we investigated the efficacy of a w-pHF containing prebiotic on IC. Our findings show that w-pHF, containing GOS, low content of lactose and low osmolarity were effective against IC. The underlying mechanism accounting for the reduction of IC is not completely known, but it is likely that this could be influenced by different factors. Several investigators have examined the effect of different dietary interventions on IC. In bottle-fed infants, a variable degree of improvement in symptoms of IC has been observed by using hydrolyzed cow milk proteins formulae (17,18). In these infants, the reduction of colic episodes could be influenced not only by a downregulation of allergic response, but also by beneficial effects of other factors on bowel digestive functions (19). In fact, partially hydrolysed bovine proteins can accelerate gastrointestinal transit-time via reduction of opioid activity released during digestion, as reported in an experimental study by Mihatsch et al. (20).

Growing evidence shows a role for OS in host microbial interactions for human health (21). Several studies have been published, specifically investigating the effect of prebiotics on microbiota growth in the infant’s gastrointestinal tract. Infant colics are usually associated with lower Lactobacillus and Bifidobacterium colonies and increased anaerobic Clostridium species in place of anaerobic bacteroides species and Bifidobacterium species (22). Giovannini et al. demonstrated that a formula supplemented with GOS had an efficient performance on gut microbiota, mimicking human milk promotion of Bifidobacterium growth and reduction of Clostridium after an initial period of one month. In line with our results, they showed that the tested formula containing GOS had a significant effect in lowering risk rates of colic and regurgitation when comparing with the standard formula, with a boosting effect on the beneficial bacterial flora and an inhibiting effect on Clostridium growth (23).

The low content of lactose in our tested formula also seems to improve gut homeostasis. Colic can result directly from the hyper-peristaltic stimulus of the fluid load imposed by the osmotic action of unabsorbed lactose in the small intestine, and gas or pharmacologically active metabolites might be responsible for the symptomatic signs. In many susceptible infants, this excess of gas is responsible for triggering colic. This model of colic implies that symptoms could be relieved by reducing the lactose content of the infant feed. In a non-randomized, non-placebo-controlled pilot study, Infante et al. demonstrates that the use of an adapted infant formula with a low lactose concentration leads to clinical improvement and a decrease in expired hydrogen in colicky infants (24). According to these results, our study infants with colic might benefit from this specific adapted formula because of its low content of lactose compared to a standard formula.

In conclusion, our study provides compelling evidences for the relation between IC reduction and type of formula used, supporting the hypothesis that infants fed with a w-pHF, containing OS, with low content of lactose and low osmolarity, have a significant improvement of IC. It is probable that all the above-mentioned factors (quality of proteins, low content of lactose, prebiotic and modulation of gut microbiota) may contribute to the positive effects of the tested formula, but further studies are needed to clarify which one could have a prevalent action. The studied formula could represent a useful baseline approach for colic treatment in otherwise healthy infants, reducing pharmacological treatments.

The work was supported in part by an unrestricted grant from Humana Milan, Italy devoted to the Department of Translational Medical Science of the University of Naples “Federico II”. However, Humana had no influence on: (1) the study design, (2) the collection, analysis, and interpretation of data; (3) the writing of the manuscript; and (4) the decision to submit the manuscript for publication.

We thank the children and families for their continuous participation in the study, as well as the family pediatrician team for the excellent work.