Five types of attiéké have been described in Côte d’Ivoire according to their origin of production. The type of starter added into cassava dough is one main determinant of attiéké quality therefore the physicochemical and microbial profiles of 30 cassava starters from the main production zones in Côte d’Ivoire were determined in this study. Starters produced in Dabou, Jacqueville and Grand-Lahou were more acidic. Their total acidities were respectively 9.25 ± 2.46 g l-1, 6.75 ± 2.11 g l-1 and 6.89 ± 1.99 g l-1 with low pH (4.53 ± 1.18, 4.42 ± 0.35 and 4.68 ± 0.26). Those from Abidjan and Yamoussoukro were less acidic with lower total acidities (5.52 ± 1.97 g l-1 and 4.82 ± 1.37 g l-1) and higher pH (4.95 ± 0.33 and 5.45 ± 0.49). Moisture levels of samples from Dabou, Jacqueville and Grand-Lahou were lower, while their reducing sugar and starch content were higher compared with those from Abidjan and Yamoussoukro. Starters produced in these localities contained more Enterobacteria, while the others had a high load of lactic acid bacteria, mesophilic aerobic germs, yeast, moulds and Bacillus. Multifactorial analysis revealed three main groups of cassava starters depending on the region of production.

The zones included in this study are the lagoon area of traditional and cultural production of attiéké, namely Grand-Lahou, Dabou and Jacqueville in the Grands Ponts region, Abidjan and the zone of Yamoussoukro, where production and sale of significant quantities are observed (Assanvo et al., 2006). In each of those zones, two villages were randomly selected from a repertory of 9 to 15 villages retained after an exploratory survey. Village selection criteria were the distance from the main town of the corresponding department (< 45 km) and the presence of attiéké producers’ groups. Thus, the villages Braffedon and Nandibo 2 (Grand-Lahou), Akradio and Opoyounem (Dabou), Addah and Sassako-Begnin (Jacqueville), Anoumambo and Djibi village (Abidjan) (Kouassi et al., 2016) and Lolobo and Seman (Yamoussoukro) were selected.

In each study location, three attiéké producers were randomly selected amongst the producers who had participated in the survey. These producers have harvested cassava for starter production directly from their fields except those based in Abidjan who supply themselves from the market. Cassava starter production was conducted according to the usual cultural know-how of traditional producers as described by Kouassi et al., (2016).

Sampling and transport of samples

On the basis of previous work (Kouassi et al., 2016), only the most widely used cassava variety in each locality was selected for cassava starters production. Thus, the varieties Improved African Cassava (IAC) and Yavo were retained for all the lagoon zones and Yamoussoukro, respectively. A total of 30 cassava starter samples (5 production zones × 2 villages surveyed × 3 starter producers) were collected for microbiological and physicochemical analysis. Ready-to-use cassava starter samples (500 g) were aseptically taken from producers into food bags, placed into thermal container with dry ice and transported to the laboratory for subsequent analysis.

The preparation of the analytical unit, the stock solution and the decimal dilutions were carried out as described by Djéni et al., (2011). Enumeration of mesophilic aerobic germs (MAG) and lactic acid bacteria (LAB) were done according to AFNOR Standard (NF V08-051, 1999). Plate Count Agar was used for MAG and incubated at 30°C for 24–72 hr. On Man Rogosa Sharpe agar, LAB were incubated anaerobically for 24 to 26 hr at 32°C in a jar containing a candle. Enterobacteria were counted on violet crystal and neutral red bile glucose agar according to NF ISO 03 453, 1995. The enumeration of yeasts and moulds was carried out according to the Standard NF (ISO 6611, 2004). Yeasts were grown on Sabouraud agar and incubated at 30°C for 24 to 72 hr in Petri dishes. The Potatoes Dextrose Agar was used for the isolation of moulds and Petri dishes were incubated at 30°C for 24 to 72 hr. Bacillus counts were performed on Mossel Selective Agar. The Petri dishes containing between 15 and 300 colonies were counted in cfu g-1.

One-Factor Analysis of Variance was used to compare the physicochemical and microbiological parameters of the different samples. Initially, the equality of variance was verified through the Levene test (Suffert, 2007; Tchuigoua, 2011). In case of a significant difference, P ≤ 0.05 (Vessereau, 1992), multiple comparisons were carryied out using a Duncan test. Microbiological data were transformed with log (cfu g-1+1) to obtain equality of variance. Principal component analysis (PCA) and Hierarchical agglomerative clustering (HAC) were performed, in addition. PCA allowed grouping the different types of samples analysed, according to their physicochemical and microbiological compositions. HAC allowed agglomerating cassava starter samples based on the similarity of their physicochemical and microbiological compositions. The dendrograms were obtained applying a Ward algorithm for obtaining more distinct classes (Bruynooghe, 1978).

The values of a column with the same letters are not significantly different
Table:2Fermenting germs of cassava starters [log (cfu.g-1 + 1)]

The correlation between the biochemical and microbiological parameters identified resulted in four axes of eigenvalues (Table 3). The two main axes 1 and 2, which constitute 96.49% of the total variability, allowed graphical representation by hierarchical ascending classification (HAC) (Figure. 1) and by principal components analysis (PCA) (Figure. 2). It appears that of the 12 parameters that contributed significantly to the formation of the plane (axes 1 and 2), the parameters LAB, MAG, Enterobacteria, yeasts, moulds, Bacillus, reducing sugars, moisture and pH were positively correlated with the first axis (83.80%), while starch and total sugars were positively correlated with axis 2 (12.69%).

Three groups of cassava starters were distinguished in both the dendrogram (Figure. 1) and the PCA plot (Figure. 2). Group 1 consisting of cassava starters of the zones of Dabou, Jacqueville and Grand-Lahou was characterized by high contents of starch, reducing sugars, total sugars and a high titratable acidity, while moisture content and pH were low. In the same group, the total fermenting microbiota was found to be high with, however, low loads of Enterobacteria. The second group representing the cassava starter of the zone of Abidjan was distinguished by high values for pH and moisture content, and low levels of starch, reducing sugars and titratable acidity. High loads of Enterobacteria and mean loads of other fermenting germs were observed in group 2. The cassava starter of the zone of Yamoussoukro (group 3) demonstrated a high pH and moisture content, and low levels of starch, total sugars, reducing sugars and total acidity. An absence of moulds and Bacillus, low loads of MAG, LAB and yeasts but a high load of Enterobacteria were furthermore observed in this group. 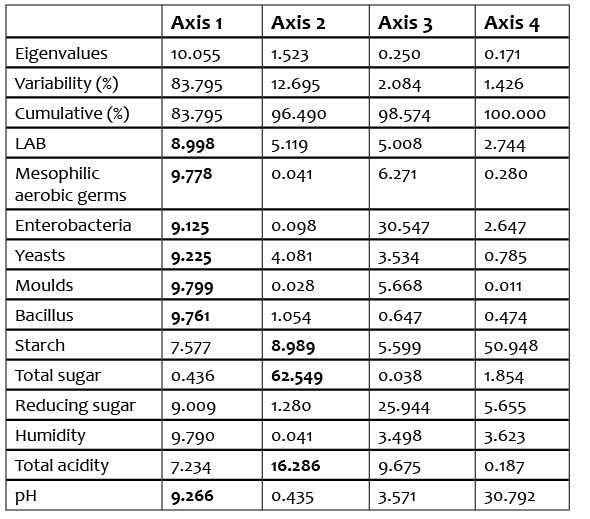 Table:3Correlation between the physicochemical and microbiological parameters and the axes, after the PCA relative to the cassava starters 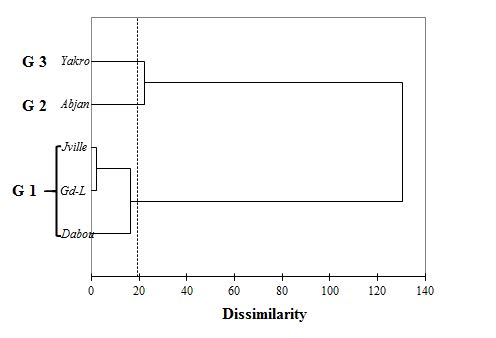 Figure 1: Grouping of cassava starters according to their physicochemical and microbiological compositions 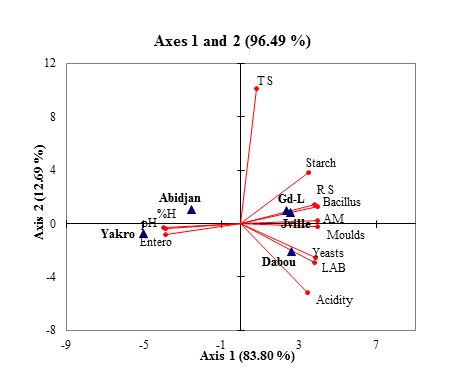 Figure 2: Projection of cassava starters and physicochemical and microbiological compositions in the plan defined by axes 1 and 2 of the PCA

Microbiological analysis of cassava starters showed a significant disparity in the composition of the germs studied. In general, LAB, MAG and yeasts were the most abundant germs in all starters. The strong presence of germs is a major asset in the fermentation of cassava dough for attiéké production. Indeed, Bouatenin et al., (2016) have previously shown that the starter provides the cassava dough with the main fermenting germs involved in its fermentation. The results of our study corroborate those of Djéni et al., (2015) who found higher loads of these same germs in starters from the Ebrié, Adjoukrou and Alladjan ethnic groups. Except for LAB, cassava starters of the zones of Dabou, Jacqueville and Grand-Lahou had similar microbial loads. This similarity may reflect the fact that producers of cassava starters in these three zones have substantially the same practices based on the shared regional and cultural space (region of Grands Ponts).

The colonization of cassava starters by germs was found to be less intense in the starters of Abidjan and Yamoussoukro production zones. Indeed, most of the producers of Abidjan involved in the study braise cassava root for starter production. Once braised, a crust appears on the cassava root which is left on the cassava root for packaging and spontaneous fermentation. However, the microbial colonisation takes place on the surface of the root (Coulin et al., 2006; Djéni et al., 2015). Thus, it is likely that the presence of the crust has slowed down the growth of the germs.

Regarding to boiled production, the physicochemical characterization of cassava starters showed higher values in the region of the Grands Ponts than in Yamoussoukro. The high acidity (6.75 ± 2.11 to 9.25 ± 2.46 g l-1) observed in production zones of the region of Grands Ponts may be due to the relatively long spontaneous fermentation time of the cassava starter during its preparation. Indeed, starter preparation requires 36 h of spontaneous fermentation in these areas (Kouassi et al., 2016) while the same process is reduced to 24 h in the Yamoussoukro production zone. This shortening of fermentation time would be at the origin of the weak growth of microorganisms as suggested by a recent study (Tetchi et al., 2012) showing that the growth of microorganisms during the preparation of the traditional cassava starter is proportional to the spontaneous fermentation time. According to the authors of this work, a short spontaneous fermentation time always results in starters of poor microbiological and physicochemical quality. The fermenting load is sharply reduced with a low content in total sugars, starch and a, high pH and moisture level (Tetchi et al., 2012). Eventhough sweet cassava varieties have the best aptitude for the starter production, the (sweet) Yavo variety used in Yamoussoukro did not give the best result.

By hierarchical classification and grouping based on the physicochemical composition and the microbial loads, three main groups of cassava starters were distinguished. The clustering of the three cassava starters from the region of Grands Ponts in the same group reflects shared know-how and procedures of local producers.

No conflict of interest declared

The authors extend their sincere thanks to the Programme d’Appui Stratégique à la Recherche Scientifique (PASRES N° 98) and to the Fonds Interprofessionnel pour la Recherche et le Conseil Agricole (CSRS/FIRCA_IG Contrat n° 003/CS/PPAAO/2013) for the financing of this work. They also acknowledge all attiéké producers of the study sites for their willingness to participate freely in the study. Finally, they warmly thank Dr Jasmina Saric, Head of the CSRS Projects and Publications Support Unit for reviewing the manuscript.