The eggs of the original silky fowl are well known in the Orient and for thousands of years have been credited with famous medicinal and health-promoting values. However, a modern scientific approach has only recently been applied to determine its medicinal, chemical and biochemical components[3,9]. Recently, silky fowls eggs are considered to be a chemical storehouse and an excellent source of sialic acid[4], which is an important biological properties[5,6] and that silky fowl eggs are considered to be an excellent food material[7,11]. The object of the current study was to investigate rheologic properties and oxidative stability of baked sponge cake made with silky fowl egg compared to the cake hen eggs of white leghorn origin.

Wheat gluten proteins mainly comprise gliadin and glutenin [10]. During dough mixing, gluten proteins are hydrated and form a three-dimensional network. Which is responsible for the unique viscoelastic property. One of the factors that determine the quality of the bread is gluten formation degree. It is considered sufficiently likely during gluten formation in the gliadin and glutenin, lipids are involved particularly large. However, it is not understood in this regard. We have previously reported[12], Silky fowl egg has been implicated as an important factor that influences this phenomenon. Already, silky fowl egg has reported that it has the function of excellent properties for the dough. However, it is not clear with respect to the mechanism of action for the dough or gluten and silky fowl egg. It is determined that possible by the means clarify this problem, the physical theory techniques, to measure the stress relaxation primarily. The objective of this study was to investigate the effects of silky fowl egg on the bread dough, gluten, stress relaxation behavior, also, comparison with hen’s egg.

Materials. Flour was purchased from Nippon Suisan (Tokyo, Japan). The contents of protein, ash, lipid and water were 13.1% (Kjeldahl, N x 6.25), 0.4%, 1.8% and 15.0 %, respectively. More than 95% of the flour granules were sifted though the sieve of 132- mm mesh. Eggs of silky fowl and hen, White Leghorn origin were a kind gift from Canaly 21 (Co., Ltd., Gifu, Japan). Each fresh egg fraction was obtained from the eggs collected within a day after laying and immediately used for these experiments. Eggs were collected from flocks of 20 silky fowls and 20 hens. A total of 10 breads were made, two eggs being included in each bread. The same feed was given to the silky fowls and Leghorns and they were kept under the same environmental conditions.

Bread dough was prepared using commercially available ingredients for preparing bread dough and by employing the straight dough method. More specifically, dough was prepared using ingredients for preparing a loaf of bread, i.e., lipid, strong flour, live yeast, water, sugar, salt and skimmed milk powder. The added lipid content was 10%. Dough temperature at the completion of mixing was 26(τ) C, and the dough was fermented for 90 min at a temperature of 28 to 30(τ) C. The dough was then molded, and the molded pieces were subjected to final fermentation for 60 to 70 min at a temperature of 36(τ) C and a humidity of 75%, followed by baking for 15 to 20 min at temperatures of 200(τ) C (top of oven) to 190(τ) C (bottom of oven). Dough subjected to only primary fermentation was also used in this experiment. For each type of bird egg, 5 replicate bread dough were prepared. Each bread dough was made from two eggs, which had been laid different birds.

Gluten was separated from bread dough samples as follow; bread dough was then removed in a sieve and washed with distilled water for 20 min by hand until the gluten was obtained. After washing, the gluten was frozen in liquid nitrogen and freeze-dried. The freeze-dried gluten was ground and sieved using a 250(τ) m sieve. This sample (100g) was defatted (four times) with 500 ml of chloroform under magnetic stirring for 20 min, filtered under vacuum, then dried in an air cupboard overnight.

Where (τ) is the relaxation time and the value H(ττ) in the spectrum represents the intensity of relaxation process at that particular time on a logarithmic scale. The rapid application of strain (5% with a rise time of 0.1 sec) can give rise to inertial effects such as force oscillations that can distort the data and lead to an inaccurate relaxation spectrum at short times. Data below half of the rise time (0.05 sec in this case) probably do not represent the true distribution of relaxation times[8]. Therefore, the G(t) and H((τ) ) at times <0.05 sec were plotted by a light line and the test time 0.05 sec was indicated by a vertical arrow at 0.05 sec in Figs.1-6.

Results and Discussion:
Stress relaxation of bread dough and gluten: 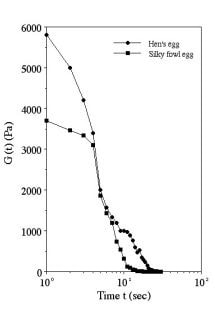 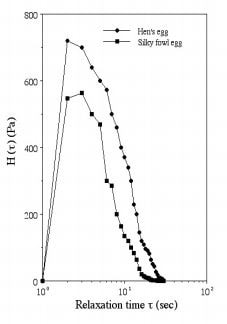 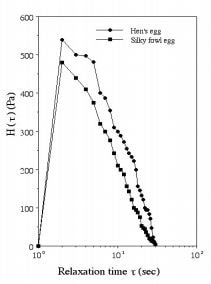 From the results shown the relaxation behavior of bread dough and gluten shows two relaxation processes that occurred at short relaxation times and the longer relaxation times from 100 to 102 sec, respectively, which is typical relaxation behavior for polymers with a broad molecular size distribution and network structure. As molecules that powerful this network structure, the possibility that may be fatty acid composition in silky fowl egg yolk are involved deeply can be considered. Probably, it is presumed from the ratio of unsaturated fatty acid is a constituent lipids fractions in hen’s egg yolk of often. The relationship between the network structure and lipids fractions in egg yolk under consideration.

Effects of temperature on the stress relaxation of gluten:

That the relaxation curve of hen’s egg is highly dependent on temperature can be considered from this. As for the mild curve about the hen’s egg, a difference was not confirmed at 20 and 300 C, but a change was confirmed in a mild curve at 400 C. The fatty acid composition of the hen’s egg york is considered as ratio one caused by there being relatively many it of the saturated fatty acid. In addition, it stops in a level of the reasoning to the last because I do not measure fatty acid composition. In all, it is guessed that probably constitution fatty acid composition is more likely to greatly influence it. As a result, it is considered that it is a cross-linked structure of the glutelin and gliadin[10], gluten formation, that the fatty acid plays an important role in this cross-link formation. Be concluded from this result is not possible that the fatty acid is involved in the formation of the gluten network. I would like an exercise for the future. 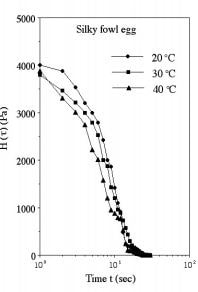 Fig. 5. Effects of temperature on the stress relaxation of gluten with Silky fowl egg. 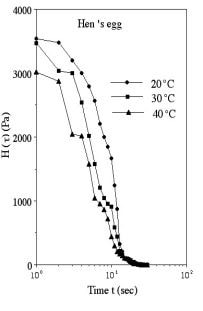 Fig. 6. Effects of temperature on the stress relaxation of gluten with Hen’s egg.

There is a main purpose of this research in solving the food study functional characteristic of silky fowl egg. This time, the relationship between cloth and gluten formation, and silky fowl egg was considered by measuring a stress relaxation curve as a means to solve the interaction of gluten and silky fowl egg. Hen’s egg were used as a candidate for comparison. As for the bread dough and the stress relaxation test result of gluten containing silky fowl egg, the very good result was obtained as compared with hen’s egg and the stress relaxation test result of butter. It has checked that silky fowl egg was the lipid excellent in network formation of gluten as one of the reasons the good result was obtained. A possibility of being a factor with fatty acid composition of egg yolk major probably was able to be considered. From now on, it will pursue about a relation with fatty acid composition.