Pomegranate Fruit Pomegranate (Punica granatum L.) is one of the most important fruit crops in India because of its adaptable nature, high profitability and being cultivated on a commercial scale in temperate, tropical and subtropical regions of country[11]. Its fruits are good source of nutrients and bioactive compounds, mainly anthocyanins which exhibit strong chemo-preventive activities such as antimutagenicity, antihypertension, antioxidative potential and reduction of liver injury[12,13]. The edible part of the pomegranate is called aril which constitutes about 52% of total fruit (w/w), comprising 78% juice and 22% seeds[10,4]. Joseph Priestly (1767) invented carbonation process in which carbonated water was made by passing pressurized carbon dioxide through water. The pressure increases the solubility and allows more carbon dioxide to dissolve than would be possible under standard atmospheric pressure. When the bottle was opened, the pressure is released allowing the gas to come out of the solution, thus forming the characteristic bubbles.

A method of preparation of carbonated RTS beverages using pomegranate syrup was described .Preparation and storage of carbonated ready to serve (RTS) pomegranate beverage. The pomegranate syrup consisted of 100% fruit juice, 0.5% citric acid and brix was maintained at 65%. The syrup was diluted to 5 times and then carbonated. Carbonated RTS beverage from acidic tamarind pulp was developed by exposing the pulp to mixture of food enzymes .Tamarind RTS beverage was prepared using 12.5% tamarind extract, 0.4% acidity and adjusting to 16° brix. It was demonstrated that carbonated coconut beverages packed in glass bottles with crown cork seal can be safely preserved for 6 months period at an ambient temperature range of 28- 32°C. Fruits like pomegranate, orange, amla and lemon because of high acidity and sharp taste are not palatable for direct consumption. To make them fit for human consumption and available throughout the year in the form of beverage, a reliable, controllable and reproducible technology has been developed for production of carbonated beverage with preservation of all the nutrients of the fruit.

Compared to fruit juices the formulations of carbonated fruit beverage offers more variety of flavors nutrients long shelf life and other physiological benefits with a greater margin of safety in drink with a lower inherent cost. In the present study carbonated pomegranate beverage was successfully prepared from the pomegranate juice and physicochemical properties with sensory evaluation were studied.

Pomegranate fruits of ganesh variety were obtained from koyambedu anna fruit market from Chennai. The fruits of uniform size, color, and maturity were used for investigation.

The moisture contents of the fruits were determined according to standard method. (Method 934.06 of AOAC, 1990).

acidity Acidity of juice was determined by titration with 0.01 N sodium hydroxide[16]. The per cent acidity was expressed in terms of anhydrous citric acid.

Total sugars, reducing sugars and total soluble solids content in the pomegranate fruits were estimated by following the procedures of 932.12 of AOAC (1990).

Determination of ascorbic acid was done by 2,6-dichlorophenolindophenol dye method suggested by Ranganna [16].

Reducing, non-reducing and total sugars were determined by the methods of Lane and Eynon[12] with slight modifications suggested by Ranganna[16].

The total anthocyanin pigment were measured by the method of Flueki and Francis[16] with slight modification suggested by Khurdiya and Roy[9].

Evaluation It has been long recognized that enjoyment of Food product is essential for good health. Enjoyment would mean choice, acceptance, nutrition and whole sameness. The 9 point hedonic scale for sensory evaluation has been used extensively since, its developments with a wide variety of products and with considerable success.

Development and Characterization of a Carbonated Pomegranate Beverage:

Statistical analysis of the results during storage of carbonated beverage of pomegranate juice was done according to the Factorial Completely Randomised Design (FCRD).

Results and Discussion:
Physico-chemical characteristics of pomegranate fruit and juice:

Fruits of pomegranate cv. Ganesh used in present investigation were having following physical as well as chemical properties. 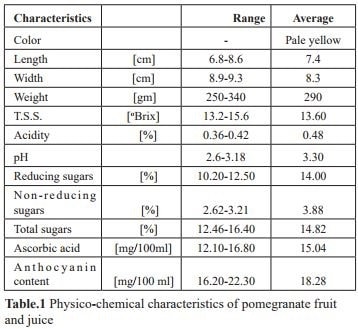 The values of physico-chemical characteristics of pomegranate fruits and juice used in present investigation are comparable with those reported by Swaminathan (1977), Soodet al. (1982), Jagtap et al. (1992), Waskar and Deshmukh (1995) and Vaidya et al. (1998). 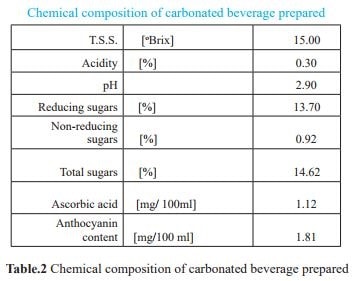 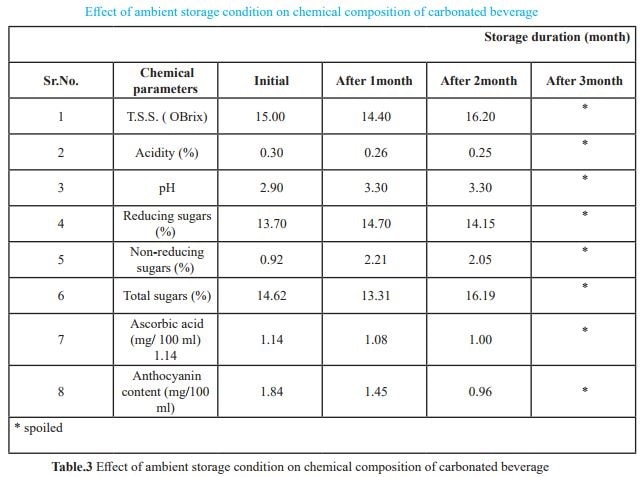 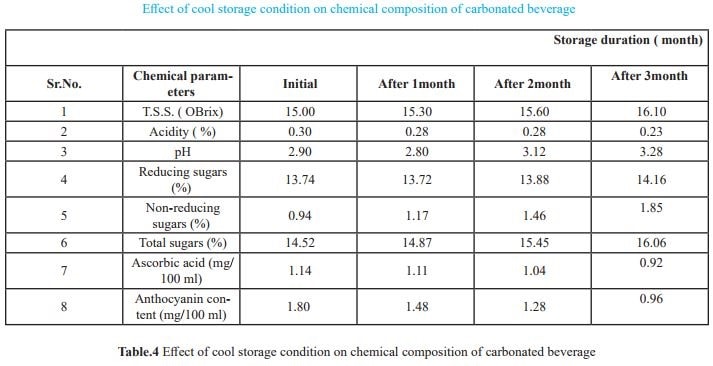 The score for all sensory attributes decreased gradually during storage period. The decrease in score for taste, flavor, colour and overall acceptability was rapid in ambient storage condition than cool storage condition Similar findings were reported by Khurdiya et al. (1996), and Shelar (2001).