Ethanol, hot water and cold water extracts of bitter leaf (Vernonia amygdalina) were used as a preservative for catfish (Clarias gariepinus) to determine how far it can extend its shelf life. It was observed that the Ethanolic extract of bitter leaf was able to extend the shelf life of catfish (Clarias gariepinus) from the 24 hours as seen in the unpreserved sample to 36 hours post-slaughter after which it become unfit for consumption. The hot and cold water extracts could only preserved the fish for 20 hours post-slaughter. These two extract cannot thus be used to preserved catfish (Clarias gariepinus) as it could not even keep the fish fit for consumption for as long as it would have when unpreserved. Ethanol proved the best solvent of extracting bitter leaf because of its ability to liberate its phytochemical compounds unlike the hot and cold water extracts. This observation thus makes ethanolic extract of bitter leaf (Vernonia amygdalina) a useful natural fish preservative.

Fish is a highly perishable commodity which spoils immediately after capture. The rate at which bacteria grow in fish is significantly reduced at low temperature. One of the simplest ways of lowering fish temperature thereby retarding bacteria growth is to ice the fish. As soon as the fish is iced, heat is transferred from the fish to the ice causing the ice to melt. This continues until an equilibrium temperature is reduced between the ice and the fish. This temperature will be a little above O0 C if sufficient quantity of ice is used. At this temperature, the activities of micro organisms are reduced and the storage life of fish is prolonged. As the ice melts, the flowing water washes away bacteria and other debris from the fish. There have been many research studies regarding the shelf-life of fish stored in ice. Based on these studies, it is generally accepted that some tropical fish species can keep for longer periods in comparison to fish from temperate or colder water (Clucas, 1985).

This can be attributed to differences in the bacteria growth rates in tropical fish stored in ice. However due to differences in the criteria used to define the limit of shelf-life, and methodologies used, comparison between shelf-life of fish from tropical and temperature waters is still difficult (Clucas, 1985). The herb known as the bitter leaf is a shrub or small tree that can reach twenty three feet in height when fully grown. Bitter leaf has a grey or brown coloured bark; the bark has a rough texture and is flaked. (Butter and Bailey, 1973)The leaves are used for human consumption and washed before eating to get rid of the bitter taste. They are used as vegetable and stimulate the digestive system, as well as they reduce fever. Furthermore, Vernonia amygdalina is also used instead of hops to make beer in Nigeria (Butter and Bailey, 1973). It has been observed to be eaten by goats in central zone of Delta state, Nigeria. However, in general has there been found, that Vernonia amygdalina have an astringent taste, which affects its intake (Bensi et al; 1995). The bitter taste is due to anti-nutritional factors such as alkaloids, saponins, tannins and glycosides (Butter and Bailey, 1973). This work is therefore undertaken to preserve and extend the shelf-life of freshly slaughtered catfish (Clarias gariepinus) using extracts of bitter leaf also determine which extract of Vernonia amygdalina has the best antimicrobial ability to stall spoilage in freshly slaughtered Clarias gariepinus.

The fish sample catfish (Clarias gariepinus) was purchased from Monday market in Kainji, Niger State. The fish was transported in kegs to the fish museum at Federal College of Freshwater Fisheries Technology, New Bussa, Niger State for the shelf-life studies. The fish used for the experiment was gutted before they were dipped in the three extracts separately. The working table was washed and later cleaned using ethanol.

The plant materials used was bitter leaf (Vernonia amygdalina) and it was collected from Monday market in kanji, Niger State.

The fish were dipped in the bitter leaf extracts in separate bowls.

Food quality and safety have been concerns of mankind since the dawn of history, and in recent years there has been increasing disquiet on the part of governments, food processors and consumers (WHO,1995). Fish is a highly perishable commodity, more than cattle, sheep and poultry, and it gets spoiled very quickly after capture. Therefore, unless fish is disposed of quickly after capture, it must be preserved in some way (Ikeme and Bhandary, 2001). Fish preservation is an important method of extending the shelflife of fish in order to improve the quality of the products, for a longer period of time. The result of this work showed that catfish [Clarias gariepinus] can be preserved using natural preservatives [plant] which will extend its shelf-life and reduce post harvest losses. In the global food industry, natural is a powerful force as there is increasing resistance at regulatory and consumer levels against chemical food preservatives.

The results of the work showed that catfish (Clarias gariepinus) samples preserved with cold water, hot water and ethanolic extracts of bitter leaf differed from one another as well from the unpreserved sample in terms of the observed organoleptic characteristics. The results showed that unpreserved catfish can stay for 24hours postslaughter before spoilage sets in. In the global food industry, natural is a powerful force as there is increasing resistance at regulatory and consumer levels against chemical food preservatives. Vernonia amygdalina has attracted attention to itself due to its possible antimicrobial activity. Vernonia amygdalina leaf extracts have been found active against a wide range of micro organisms that are of micro-biological importance for use in preservation. The shelf-life of catfish was extended by extracts of bitter leaf [Vernonia amygdalina] from 24hrs as seen in the unpreserved sample to 36 hrs in the ethanolic extract preserved [Table 1]. It was also observed from the study that ethanol was the best method of extraction for the preservation of catfish [Clarias gariepinus] since it was found to extend the shelf life of fish to 36hrs compared to hot water than cold water extracts. Investigators in the past had also clearly shown that ethanolic extracts were more effective than hot and cold water extracts (Ibekwe et al, 2001, and Dutta 1993). It also corroborates the findings of Ephraim (2009) who used the cold water and hot water and ethanolic extracts of black pepper, seeds, grape peel and pawpaw seeds and found their ethanolic extracts most suitable for combating organisms that cause spoilage in fish. Hot water and cold water extracts of bitter leaf [Vernonia amygdalina] preserved fish for 20hrs (Table 2) before it was no longer fit for human consumption.

The inability of hot water to perform much is probably because some of the active ingredients like the flavonoids, saponins, tannin and glycosides in bitter leaf [Vernonia amygdalina] (Awe et al; 1999) are heat labile, while the reason for that of cold water could be that these compounds cannot be easily liberated by it. It can thus be deduced that hot water and coldwater as solvents of extraction for bitter leaf is less effective than the ethanolic extract. The unpreserved sample remained fit for consumption for 24hrs before spoilage could set in. This is in line with the findings of Ephraim (2009) who monitored catfish [Clarias gariepinus] at an ambient temperature but differed from that of Ajibola (2010) and Olateju (2010) as the unpreserved fish sample from these studies stayed till the 20th hour.

The reason for this study may be attributed to the ambient and environmental temperatures as at the time of experiment. The study carried out by Ephraim (2009) was in Abeokuta Ogun State showed a variation in environmental while that of Ajibola (2010) and Olateju (2010) might have resulted in a different ambient temperature as at the time of experiment. This work confirms the efficacy of ethanolic extract of bitter leaf (Vernonia amygdalina) and its potential as organic preservatives in fisheries and aquaculture to reduce post-harvest losses. 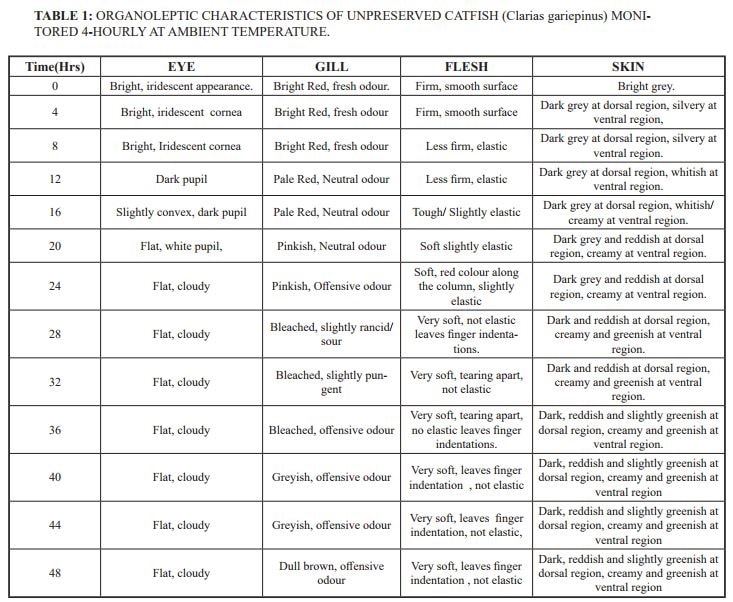 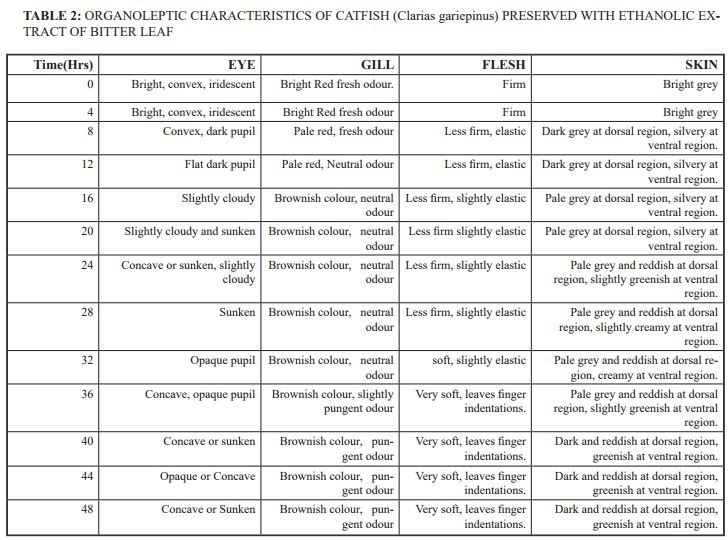 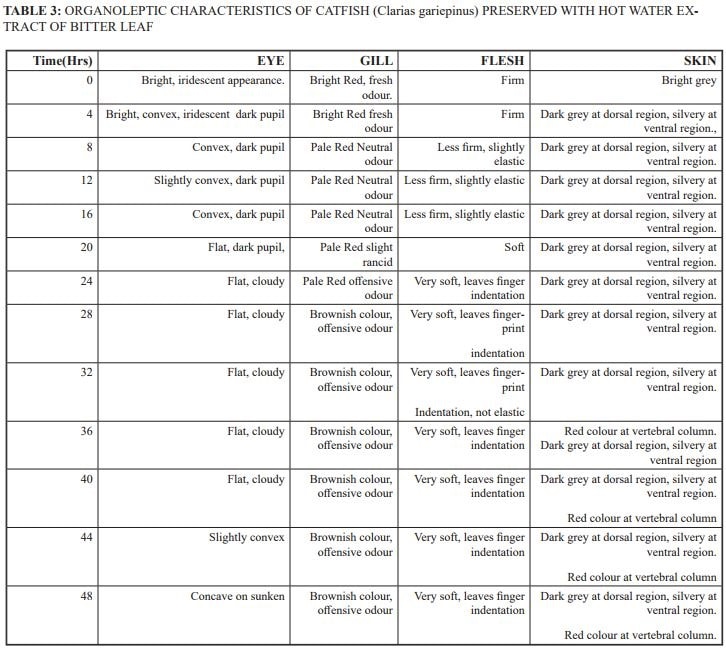 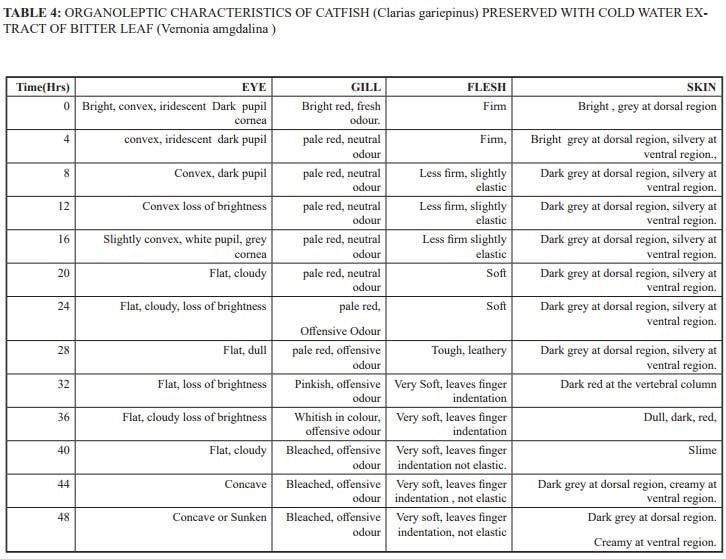 It can thus be concluded from this study that ethanolic extract of Vernonia amygdalina [bitter leaf] is best for preserving catfish [Clarias gariepinus] in order to extend its shelf life. Bitter leaf is able to do this because of its preservative ability which stems from the phytochemical compounds present in it. These compounds where also discovered from this work to be heat labile. It is a yet to be exploited natural preservative for catfish through which post harvest losses in fisheries can be reduced.