Having a unique arrangement and structure, the Akiyama probe is a form of tuning fork atomic force microscope probe. The functioning cantilevers that are long and soft in nature bring about the possibility of measuring soft objects in tapping mode. In this discussion, some characteristics of the probe have been discussed with the implementation of finite element analysis (FEA) and experiments conducted in a conventional environment. The advantages use, and practical advancements of the Akiyama probe have been discussed effectively, proving that it can be used in its tertiary eigenmode under FM non-contact category. Suitable comparisons and measuring of methods from small tapping to normal tapping with the similar probe and equipment are effectually mentioned.

This paper reflects information and knowledge that is present in the literature on the Akiyama probe. The discussion involves an elaboration of features, characteristics, advantages and disadvantages, uses and results in real applications. Having a unique structure, the Akiyama problem can be regarded as a form of tuning fork probe that induces an atomic force microscope. The soft, long cantilever provides a possible measurement of soft samples in tapping mode. Quartz tuning forks are manifested for high-accuracy control of frequency and are extensively applied in watches, digital circuit frequency standards, and clocks. Since they provide benefits in terms of frequency stability, high quality, self actuating and self-sensing capabilities, and the feasibility of the vibration signal transcendence there are different aspects and uses present. The Akiyama probe is therefore realized into two forms (1). The probe tip could be made from a carbon nanotube, a conventional AFM cantilever, fiber, or some other kind of stylus.

The Akiyama probe has an approach of having high stiffness in the equipment along with high-quality characteristics which provide them with a constant source of small vibrations and their frequent amplitudes. Overall, the equipment consists of a silicon nitride cantilever that is U-shaped; this is joined in a balanced manner along with the quartz tuning fork. There is an inclined probing tip (Figure 1) (2). There is a fixation of the two cantilever legs on the tuning fork prongs in a separate manner. 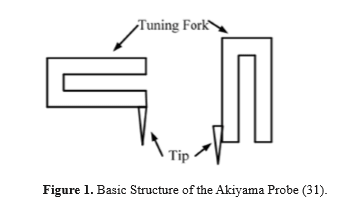 Akiyama probe is fundamentally reliant on a quartz tuning fork supported by a cantilever that is used with the help of multiple machines. One of the most important characteristics of this novel probe is that one can take advantage of both the silicon cantilever suitable spring constant and the tuning fork’s exceptionally stable oscillation with one probe (3). It is assembled with a specific version of the NANOSENSERSTM AdvancedTEC, a sharp, highend silicon tip and has an extraordinary capability of capturing images in different samples with multiple qualities (4). This functionality aspect is as precise as that of a traditional optical lever system. 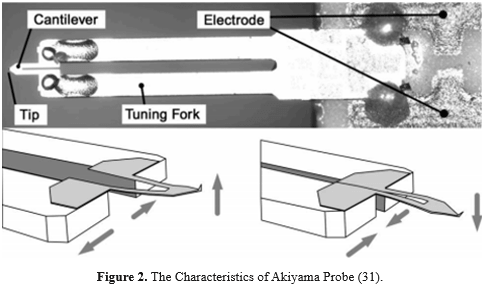 The Akiyama probe does not need a particular detection of visual components (Figure 2); there is no need of an external shaker as well (5). It only takes up a small space over the sample. These properties are crucial to forming a new group of instruments that are associated with scanning probe microscopy. The parameters of the Akiyama probe are: the spring constant is about 5 N/m; the resonant frequency is 45-55 kHz; the lengths, width, the thicknesses of the cantilever are 310micrometer, 90 micrometers, and 3.7 micrometers respectively (6). The tip diameter has a value less than 15nm. As the tip lies perpendicular to the lateral surface and the tipping point is vertical, the cantilever and tuning fork are well defined (7). Under the tuning fork excitation, the probe can self-sense through the conversion of the deflecting cantilever to a change in force.

Considering the long, soft, cantilever, the Akiyama probe cannot be applied in non-contact AFM at its initial eigenmode as the capability of the traditional tuning fork probe is limited. It is generally known that a cantilever functioning at higher eigenmode frequencies can enhance the effectiveness stiffness (8). Therefore, functioning with higher eigenmode can stretch the application range of the Akiyama probe. There are particular additional characteristics involved that are to be mediated accordingly.

The Akiyama probe offers multiple advantages and disadvantages. It implements a unique Correlative Probing system along with Electron Microscopy technology (CPEM). There is an improved performance of the SEM (scanning electron microscope) through SPM (scanning probe microscopy) techniques as well as a comprehensive characterization of the surface (9). This can be used to measure conductivity, magnetic properties, topography, roughness and electrical characteristics.

The Akiyama probes are generally ready for delivery having a new SEM. They can also be applied as a plug-in for prevailing microscopic devices with feasible integration and removal/ mounting in approximately five minutes. The probe is available with both non-magnetic and magnetic versions, so there is an appropriate fulfillment of scientific calculations. The Akiyama probe also functions incompatibility with GIS (Geographic information sysytem) FIB(Fast Ion Bombardment), AND EDX (Energy Dispersive X-ray Spectrometry) and additional accessories (10). It has an easy and quick replacement of samples and probes along with self-sensing probes without laser adjustments or optical identification. The Akiyama probe has a commercially available identification and use, and it can be utilized for an extensive range of measurements (11). The modified measures can be used with a selected probe holder made to consumer requirements. The Akiyama probe identifies user-friendly software without needing an installation; it has remote access to measurement configuration and outcomes.

There are some disadvantages associated with the Akiyama probe as well. Although the technique can be easily replicated and reproduced, the technology has not been approved as a consistent diagnostic tool for the evaluation and amplification of the conditions (12) The main reason is that these probes based diagnostic tests are often linked with false-negative outcomes due to the dilution of structures (13). However, this influence can in effect be mediated with laser assistance. Some of the signals emitted by the Akiyama probe can also be affected by elements such as sample purity and smaller changes of experimental conditions. The confirmation of these methods for the same reason is of a critical nature.

The Akiyama probe can be compared with different kinds of probes in terms of the two coupled resonators that are somewhat linked with the resonance frequency. With regard to various technologies of AFM probes such as LiteScope, the Akiyama probe provides the driving frequency formed by the piezoelectric effect of the total frequency.

Use of Akiyama probe :

The Akiyama probe is effectively significant in those conditions in which traditional SEM does not support sufficient knowledge about the product and in which the individual needs an extension of the imaging procedures. The Akiyama probe can be used as a CPEM technology, having its associative imagery; it is an excellent approach to the interpretation of the simple image and corrective analysis. The Akiyama probe can be used as a tool for 3D analysis of the creatively formed structures as an essential method (14). Moreover, with techniques such as LiteScope, equipment of efficient approach can be coordinated for imaging modes. The probe can be used to allow comprehensive analyses of assorted structures and devices that implement nanotechnology.

The Akiyama probe can be performed for quality control and research development. For a concrete structure, an Akiyama probe can be applied to a non-contact AFM sensor, and an FM-mode in its second eigenmode, even if the cantilever is soft and long (15). According to the outcomes, the Akiyama probe was of a similar nature to the traditional tuning fork AFM probe functioning under non-contact mode. This is essentially coordinated for configuring systems with better signal-to-noise ratio for obtaining a better resolution under environmental conditions (16). Therefore, measurement of bio-samples for instance movable or soft samples, the Akiyama probe is of a critical nature.

The Akiyama probe has flexible implementations and is an ideal tool for nanometer measurements and imaging capacity in industrial systems. Although the measurements are non-destructive and need no sample preparation, the probe brings about useful tendencies and translational solutions (17). There have been different researchers outlined to explain how the Akiyama probe brought about the measurement of different samples, in non-contact mode and under vacuum and all of them have positive results which can be a complementary outcome.

Characteristics and needs of Bio-Samples :

Nano-neurosurgery, in cooperation with nano-neuroscience and nano-bioelectronics, has the capability to completely revolutionize the face of modern medicine and improve the diagnosis, treatment, and prevention of different neurological disorders that are confronted by multiple patients over the next decade or two (18). This section provides information on how the state-of-the-art technologies and minute changes can provide current information on the navigation of neurosurgeries and their platforms in neuroscience and neuroradiology.

Nanotechniques require a rethinking capacity of a surgeon along with his tendency to carry out the dissection of nervous system tissues in a much precise and accurate manner (19). However, these methods offer the possibility of coordinating with the nervous system at the level of the glial cell and neurons, and even intracellular mechanisms. This is done for the restoration of normal nervous system function. Ever since the concept has been introduced in the field, it implements to the nervous system with the help of three important strategic functions (20): quantum dots and nanoparticles; carbon nanofibers, nanotubes, and nanowires; and nano-scaffolds.

With the aid of carbon nanofibers, nanotubes, and nanowires, it is expected that the brain-machine interface will be enhanced in a corresponding manner through the orders of magnitude enhancement in the capability to stimulate and record nervous system tissues. They will also allow prevision of foal real-time observation of neurotransmitter generations throughout the brain to bring about better image guidance (21). Quantum dots and additional nanoparticles will contribute with the labeling of various types of cells (for instance, tumors, glia, and neurons), along with the categorical distribution of intracellular structures. For MRI techniques and placement, these substances are already proving to be exceptional contrast agents (22). In the future, these particles will be significant tools for the identification and destruction of malignant tumors without the collateral damage of healthy parenchyma (23). Nano-scaffolds, on the other hand, have considerable characteristics to improvise homeostasis during surgical procedures (24). However, these represent an even more important feature for neurosurgery-the opportunity to for the regeneration of right axons after any injury of the nervous system. To regulate different surgeries that are dealing with the treatment of nervous system, these nano-neurosurgery outcomes are beneficial and technical enough (25). As neurology deals with the physiological functions on the level of a neuron, axon, and the synapse, these particles are the ultimate solutions for neurosurgeries in the 21st century.

For the formation of future agility, automation, improvement of capability and feedback of sensory mechanisms, it is of essential importance to operating robots if it can be outlined in the meaning of the individual subject. Automated machines that have been implemented widely in the Akiyama probe assessments are explained in the context professionally (26). Concentrating on specific solutions associated with the central nervous system, the discussion provides recommendations and improvement opportunities for the future as well.

Efforts to adjust additional arrangement for clinical applications have also been elaborated in a careful manner (27). However, there are still cost and demographic barriers which are to be controlled to increase the availability of these technological advancements for underprivileged parts that require it the greatest (28). For countries as the United States, navigation automatons, and additional products are accessible only in prominent educational institutes. There are costly problems, practical difficulties, and scientific efficacies present which should be dealt with in a sequential manner (29, 30). Before robotic processes can become familiar, it is essential to have all the viable information against risks and exposure drawbacks.