The present study revealed that the relationship between HDL and CHD stresses the importance of finding ways to increase HDL. The majority of the exercise intervention studies that have been conducted in relation to lipoproteins have tried to uncover how exercise changes the blood lipid profile. The role of lipoproteins has been a major area of interest in relation to coronary heart disease (CHD) risk. It is evident that there exists a relationship between CHD risk and physical exercise. Possible alterations in lipoprotein fractionation due to exercise might be an important change that could explain the relationship between exercise and reduced CHD risk. High-density lipoprotein (HDL) is considered a major CHD risk factor and a low level of this lipoprotein is associated with increased CHD risk. Highly exercises exhibit higher levels of HDL cholesterol (HDL-C) than their low exercises therefore it is plausible to suggest that exercise induces these beneficial changes. Exercise training also improves cholesterol homeostasis. To examine this, we measured circulating levels of glucose, uric acid creatinine, AST, ALT ALP , whole blood CBC and lipids profile and hypertentiom systoloic blood pressure and diastolic blood pressure in 150 persons (average age 50 years; with at least one metabolic syndrome risk factor) before and after 6 months of exercise training. The blood glucose showed that high significant deccrease on blood glucose with increasing exercise.

Data were expressed as M ± SD. The SPSS program version 15 was used in analysis. One way analysis of Variance (ANOVA) followed by Duncan post hoc test and/or t-test were used in analysis. Pearson correlation Coefficient was used to study correlations. P-values less than 0.05 were significant.

Table 1: Effect of exercise on the persons that have Cholesterol, Hypertension and Diabetes and Non Diabetes on the blood glucose and blood elements Na, K, Cl and Ca

Table 2: Effect of exercise on the persons that have Cholesterol, Hypertension and Diabetes and Non Diabetes on the liver functions enzymes AST, ALT and ALP

Table 3: Effect of exercise on the persons that have Cholesterol, Hypertension and Diabetes and Non Diabetes on the kidney functions enzymes Creatinine, Uric acid and Urea

Table 4: Effect of exercise on the persons that have Cholesterol, Hypertension and Diabetes and Non Diabetes on the total protein, albumin, triglycerides, LDL, HDL and cholesterol

Table 5: Effect of exercise on the persons that have Cholesterol, Hypertension and Diabetes and Non Diabetes on baseline and final testing. 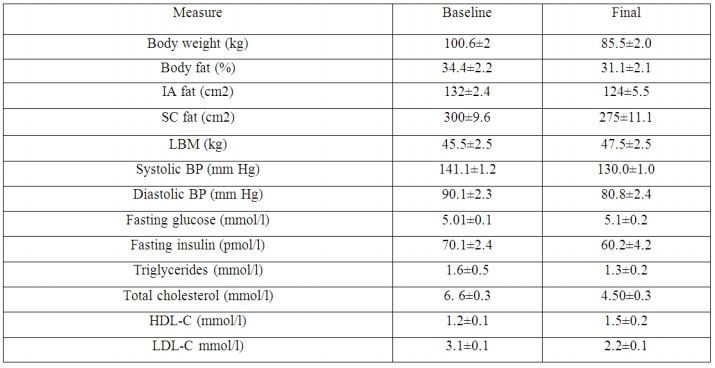 There were several differences between our study and the studies by Varady et al. that may account for these discrepant findings. First, the length of the exercise intervention was significantly shorter in the studies by Varady et al. (8 weeks) compared to our study (24 weeks). It is possible that the adaptations that promote significant changes in cholesterol metabolism may not manifest themselves until after several months of exercise training. A second primary difference between these studies was the dietary control. In our study, all subjects were stabilized on an AHA step I diet prior to beginning the exercise intervention, while in the studies by Varady et al. subjects were only asked to maintain their current dietary regimens. It is possible that significant diet variations between subjects may have masked the effects of the exercise intervention on plant sterol levels or cholesterol absorption in their studies.Another significant finding in our study was the correlations between plasma markers of cholesterol absorption with factors associated with the metabolic syndrome. At baseline, there was an inverse correlation between exercise and fasting plasma insulin levels, and a trend for a correlation between these variables at final testing (p = 0.08). Furthermore, we found an inverse correlation between exercise and TG levels at baseline, and an inverse correlation between % body fat and after the exercise training intervention. This is similar to the data of Simonen et al. (2000) who found a positive correlation between plant sterol levels and serum sex hormone binding globulin (SBHG), a marker of insulin sensitivity (Haffner 1996), and an inverse correlation between campesterol and TG levels after diet-induced weight loss. Several other studies have also noted inverse correlations between markers of cholesterol absorption and various metabolic syndrome risk factors (Elsayed shokr et al. 2016 & 2017; Gylling et al. 2004, Pihlajamaki et al. 2004), leading to speculation that low cholesterol absorption may be a component of the metabolic syndrome (Simonen et al. 2000). We believe our data provide additional support for this hypothesis. Simonen et al. (2000) also found that the diet- induced change in plant sterols was inversely correlated to the change in body weight. This correlation was independent of changes in other metabolic syndrome risk factors in a multiple regression analysis (Table 5).

Many of the beneficial effects of exercise on risk factors for chronic disease are often attributed to weight loss induced by the increase in physical activity. Our data indicate that both weight loss and increases in cardiorespiratory fitness may have independent effects on cholesterol absorption. The mechanisms responsible for the changes in markers of cholesterol absorption found in this study are uncertain. Elsayed shokr et al. 2016 & 2017; Simonen et al. (2000) hypothesized that increasing insulin resistance and obesity may change the intestinal cholesterol pool or the absorption mechanism of the intestinal mucosa. Thus the exercise could exert its effects on intestinal cholesterol absorption by improving insulin sensitivity. However, while insulin sensitivity was not measured in this study, we did not find a correlation between changes in plasma sterol levels and fasting insulin or glucose levels. Another possibility is that changes in cholesterol metabolism could be due to alterations in the expression of genes involved in intestinal cholesterol transport.

This apparent paradox may be explained by data from earlier animal studies showing that endurance exercise training may increase the catabolism of cholesterol into bile acids (Elsayed shokr et al. 2016 & 2017; Hebbelinck and Casier 1966, Malinow et al. 1968) and the excretion of cholesterol and bile acids in the feces (Fukuda et al. 1979, Ostlund and Reaban 1989). As a result, increases in cholesterol absorption may be offset by increased catabolism and excretion of cholesterol, resulting in no change or the modest reductions in LDL-C seen in many exercise training studies. There are several limitations to this study. The first is the absence of a non-exercising control group. The subjects analyzed here were part of a larger trial in which subjects with polymorphic variations at specific gene loci served as the comparison groups, so a sedentary control group was not included. Second, we did not measure plasma variables prior to beginning the 6-week dietary stabilization period, so we cannot exclude the possibility that the changes in plasma sterols were influenced by the change in diet prior to beginning the exercise intervention. However, we believe that the 6-week lead-in-period for the dietary changes makes this unlikely.

Future studies using randomized controlled trial designs should be conducted to confirm the results presented here. A third limitation of this study was that we estimated cholesterol absorption and synthesis using plasma markers In conclusion, we found that exercise training increased markers of cholesterol absorption, but did not affect markers of cholesterol synthesis, in elderly individuals with at least one metabolic syndrome risk factor. Despite this, the lipoprotein-lipid profile was improved, as there was a reduction in TG, TC, and LDL- C, and an increase in HDL-C following the intervention. This exercise-induced increase in cholesterol absorption may indicate a correction in cholesterol metabolism in this population and highlights the complex relationship between chronic physical activity and cholesterol homeostasis.

We are grateful to physiology department Faculty of Medicine Hail University, for their support with instruments for analysis of blood samples and funding.