In several countries, bullying has been identified as an important adolescent health problem;[1] several studies have described the prevalence of bullying and victimization[2-4]. Bullying affects the physical health of adolescents, resulting in headaches, stomach and back aches[1]. There are also psychological health effects, such as depression, bad temper, loneliness, helplessness[5,6], and an increased risk of suicidal ideation[7]. These effects might persist into later adolescence, and adulthood, for victims as well as for offenders[8].

Bullying is defined as a deliberate, repeated long-term use of power and aggression by a person, or a group of persons, to cause distress or to control another person[9,10]. The use of power and aggression might be through direct or indirect forms. Direct forms of bullying can include physical aggression (e.g. hitting, kicking) and verbal aggression (e.g. threats, racial or sexual harassment). Indirect bullying is usually the manipulation of a social relationship to hurt (e.g. spreading rumours, gossiping). Studies on bullying usually separate groups of adolescents involved in bullying (not involved, bullies, victims and those who are both bullies and bullied)[2,4,11], and each group is associated with different characteristics[12]. There is a variation in stature because, among adolescents, development is not at the same rhythm. Considering that short adolescents may be physically weaker than taller ones, stature seems to be related with bullying at school[13]. Although studies have demonstrated the normality of the psychosocial functioning of short normal young people[14], they seem to be more likely to be bullied than their taller peers. Also, they report a degree of social isolation as the result, or possibly even the cause, of their victimisation[15]. Moreover, the following have been found to be detrimental to the reported health-related quality of life (HRQoL) of adolescents: physical aggression, verbal aggression and/or social relationship to intentionally to hurt[16]. Therefore, this paper examined the relationship between being involved in bullying either as a bully, a victim, or a provocative victim, with stature and with HRQoL.

This study is based on data from Health Behaviour in School-Aged Children (HBSC) Portuguese survey. The sample consisted of 9670 adolescents aged 11-17 years, attending grades 6, 8 and 10, from the HBSC 2006 (n=4946) and 2010 (n=4724) waves. The HBSC is a school-based survey of adolescents’ health behaviours, carried out every 4 years. Data is used at a national and international level, using an international standardized methodological protocol, to gain new vision into young people’s health and well-being, to understand the social and psychological dueterminants of health, and to incorporate policies to improve young people’s lives. The survey is based on a self-administered questionnaire that is completed in public schools. The schools are randomly selected from a national list of schools which has been stratified by Portuguese administrative regions. The methodological aspects of the HBSC study are well-developed; a detailed description of the methods and instrument can be found elsewhere[17]. Research was conducted in accordance with both the Ethical Committee of Porto Medical School and the National Data Protection System. All school administrators gave their consent, legal guardians gave written informed consent, and students provided assent.

After reading a brief definition of bullying from the Olweus Bully/ Victim Questionnaire[18] adolescents were asked to answer, “How often have you taken part in bullying another student at school in the past couple of months?” and “How often have you been bullied at school in the past couple of months?” Response options were:
1. I haven’t been bullied/been involved in bullying in school in the past couple of months;
2. It has only happened once or twice;
3. Three times a month;
4. About once a week; and
5. Several times a week.
A cut-off point of once a week was used to indicate being involved in bullying repeatedly. The answers were then dichotomized into bully/bullied never or rarely and bully/bullied weekly. Using the dichotomous computed variables of taken part in bullying, and being bullied, adolescents were grouped as follows:

The study base includes school children from 6th, 8th and 10th grade. During data collection students were in their classes and school grade was automatically defined. Gender and age was selfreported. Actual weight (to the nearest 0.5 kg) and height (to the nearest 0.5 cm) were also self-reported. Adolescents were aware of their weight and height because they performed a physical fitness test (FitnessGram) several times a year, and physical education teachers provided them with information about their weight and height. Body mass index (BMI) was then calculated based on mass (kilograms) divided by height (square metres). Adolescents were classified into normal weight, overweight, and obese categories according to age- and gender-specific cut-off points proposed by the International Obesity Task Force[19].

HRQoL was assessed by KIDSCREEN-10. The KIDSCREEN-10 is a generic non-preference based measure of well-being and HRQoL, developed and validated internationally[20] and for Portuguese[21] children and adolescents. It contains 10 items regarding family life, peers, and school life. The items result in one global score. This one-dimensional measure represents a global score adequate for use in large (epidemiological) surveys, as described elsewhere[20].

Questionnaires were administered in schools in January 2006 and 2010, and were answered anonymously. Participation in the study was voluntary. The administration of the surveys was conducted according to standard guidelines from the HBSC survey protocol [17] and it was carried out by trained school teachers during class time.

Descriptive statistics were calculated for all variables (means, standard deviation, and percentages) for the entire sample and according to HBSC survey years (2006 and 2010), for taking part in bullying, and for being bullied in its dichotomous form. Chi square and Student t-test were used to assess the differences among HBSC survey years. Bivariate analyses were also used to examine whether being a bully and being bullied differed by HBSC wave, gender, school grade, age, weight, height, BMI category and HRQoL. Specifically, Chi-square was used to examine differences in categorical variables and t-test was used to assess differences in continuous variables. All data were tested for normality prior to any analyses. For the combined association between being a bully and being bullied ANOVA and Chi-square tested the differences among adolescent groups. Afterwards, the relationship between gender, school grade, weight, height, HRQoL and combined association of being a bully and being bullied was analysed using multinomial logistic regression. The group “not involved” was used as the reference group. To avoid multicollinearity in multinomial regression analysis, variables that were strongly associated with one another were omitted. Age was omitted because it was strongly associated with school grade, and BMI category was omitted because was associated with weight and height. All statistical analyses were performed using IBM SPSS Statistics 22.0. The level of significance was set at 0.05. 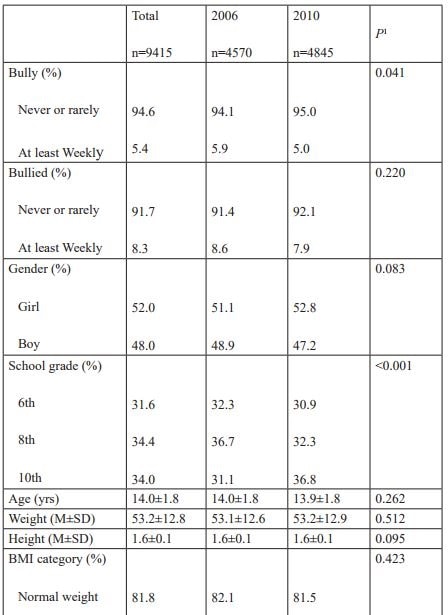 Table 1.Sample characteristics according HBSC year survey of 2006 and 2010. 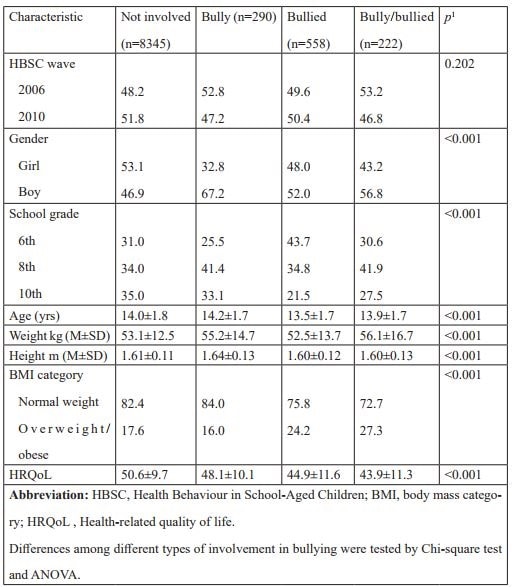 Table 2. Bivariate analysis (Chi-square or Student t test) between being a bully and being bullied and the remaining independent variables. 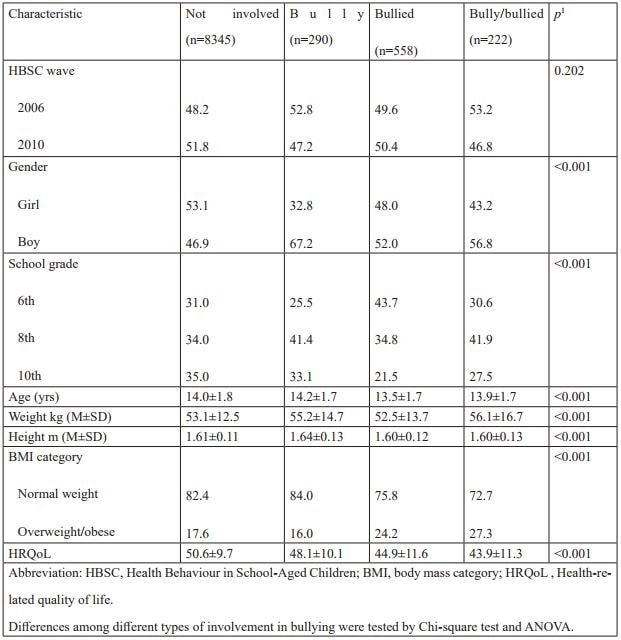 Table 3. Characteristics of adolescents according to different types of involvement in bullying. 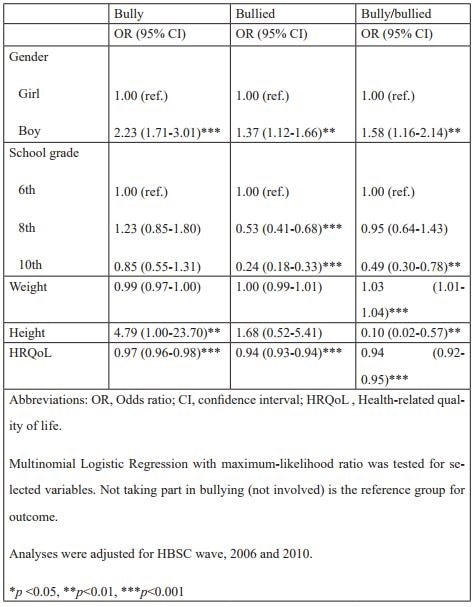 This study aimed to examine the relationship between being involved in bullying repeatedly as bullies, bullied and bullies/ bullied with stature and HRQoL. This study adds to the existing body of literature that stature is an important variable to be considered in bullying interventions, and confirms the detrimental effects of bullying on adolescents’ health and quality of life. Bullies were significantly taller than bullied adolescents and being involved in bullying (as victims or perpetrators) was related with poorer HRQoL.

The results show clearly that gender and school year, which is related with age, are risk factors. Bullying rates were higher in boys than in girls, a result consistent with previous studies in several countries[3,4]. The same pattern was also observed for adolescents victimized by bullying, but the difference was not as pronounced as observed previously[3,4]. This difference between genders could be due to the physical aggression bullying form (e.g. hitting, kicking), which is a gendered behaviour that presents customarily as a feature of boys. The higher prevalence of being bully and being bully/bullied was seen in grade 8. In this grade, adolescents are mostly 13 years of age, but surprisingly the average of bully adolescents was 14.2±1.7 years of age. This means that adolescents who have attended grade 8 and failed to move to the next grade are a risk group for bullying.

Victims of bullying are generally reported to be weaker than the bullies[22,23], and perhaps the bullied adolescents are chosen because of their vulnerability. It seems that short adolescents might present higher odds of being victims and less likely to be the perpetrator [15]. However, in the present study height was not significantly related with being bullied when compared with adolescents not involved in any type of bullying. On the other hand, being taller highly increased the likelihood of being a bully when compared with those not involved in bullying. This means that being short was not per se related with being a victim of bullying, but being taller was in fact a positive correlate of bullying. Considering that bullied adolescents are chosen because of their vulnerability, perhaps taller adolescents look to their peers as weaker and do not have a fear of provoking others. It was interesting to observe that being both a bully and bullied was negatively related with stature, which might suggest that some short adolescents who are victims of bullying are, at the same time, perpetrators. Voss[14] assumed that short adolescents might perceive that they are bullied more often, mistaking the normal rough and tumble of the playground with bullying. Fortunately, although short adolescents experience more social isolation, perhaps as a result of being bullied[15], it does not have a significant effect on school performance or selfesteem [24]. In fact, bullying is widespread regardless of stature; so far few studies have analysed the relationship between bullying and stature. Therefore, more studies are needed to understand clearly the role of stature in bullying in childhood and adolescence.

This study demonstrated that being a bullied is associated with a significantly poorer HRQoL, which is in accordance with previous investigations[16,25]. HRQoL is not merely a function of matter of life status. It is a construct that involves psychosocial adjustment, well-being, self-esteem, stress and coping, emphasizing adolescents’ perceptions of the words, including perception of happiness[20,26]. If being involving in bullying as perpetrator and/or victim is related with poorer HRQoL, it confirms the detrimental effects of bullying on adolescents’ psychological well-being and social functions. Although there are only a few studies that investigate different groups of bullying, they have demonstrated that children and adolescents involved in bullying experience more physical and emotional difficulties than their peers not involved in bullying[16]. Thus, not being involved in bullying is a health protective factor, increasing QoL[27]. Considering that adolescence is an important period of change and challenge concerning control over behaviour, psychosocial orientation and social interaction, exposure to bullying may influence health through a variety of pathways. For instance, bullying might be an indicator of social exclusion[28], and social exclusion may result in a lack of social participation and weaker social competencies that can be negative for future social and work prospects. Bullying has not only contemporary negative effects for adolescents, but may also have long-term effects on health and well-being.

Some limitations and strengths should be addressed to qualify the conclusion. Bullying was self-reported, and therefore is subject to bias. No socioeconomic information was included in the analysed, which is unfortunate because it may affect results of bullying and HRQoL. Further, the cross-sectional design of the study precludes any inference about causality and we cannot rule out that our results are explained by residual confounding due to unmeasured confounders. The main strengths of this study were the representative adolescents’ population based sample, and the use of HBSC validated instruments.

The results of the present study suggest strongly that during childhood and adolescence it is important to develop bullying prevention programs aimed to prevent and reduce the occurrence of bullying in schools. School-based intervention programs have shown to be effective not only to reduce bullying significantly, but also to lead to more constructive relationships at school[9,29], and reduce students’ health complaints[30]. The target populations are boys, those in the extreme range of height (shorter/victims; and taller/bullies), and those with a lower perception of HRQOL.