In this study, we present our experience on 55 patients affected by varicocele and treated underwent surgery with a scrotal access. 55 patients were enrolled with clinical palpable and infraclinical (ultrasonic Doppler scanning) varicocele. They all underwent scrotal varicocelectomy under general anaesthesia. At 6 months, no other complications were reported. No case of testicular atrophy was observed. None had recurrence of varicocele. Scrotal access with general anaesthesia is a safe and useful technique to treat patients with varicocele in the paediatric population.

Varicocele is a common abnormality with the following andrological implications: failure of ipsilateral testicular growth and development, male infertility symptoms of pain and discomfort. It is commonly believed that this condition may begin with the onset of puberty, at around the prepubertal – pubertal age.[2]All varicoceles are left-sided, and this is explained by turbulent venous flow related to the right angle insertion of the left testicular vein into the left renal vein. The exact association between reduced male fertility and varicocele is unknown, but a meta-analysis showed that semen improvement is usually observed after surgical correction [5] [6] Varicocele is associated with increased sperm DNA damage, and this sperm pathology may be secondary to varicocele -mediated oxidative stress. Physical examinations and scrotal ultrasounds remain the most commonly used methods. Varicocele is graded at the time of the initial physical examination according to the Dubin – Amelar grading system (I–III) [1].Several surgical approaches to varicocelectomy exist, each with its own advantages and drawbacks:

varicocele embolization, the traditional inguinal (Ivanissevich), or high retroperitoneal (Palomo) approaches, laparoscopic repair and microsurgical repair via an inguinal, or subinguinal incision. Complications of varicocele repair include hydrocele formation, persistence or recurrence of the varicocele, and rarely testicular atrophy [7] [9].Although no specific recommendations exist as to the optimal surgical technique for varicocelectomy, the use of magnification to preserve lymphatics and testicular arteries is recommended. We strongly believe that microsurgical varicocelectomy is the gold-standard technique for varicocelectomy in adolescents, due to lower postoperative recurrence and complication rates compared to other techniques [7].However, surgery via a scrotal approach was not widespread due to the difficulty of preserving the arterial supply of the testis because the pampiniform plexus of veins encoils the testicular artery at the level of the scrotum. By the way we think that scrotal access is useful in the management of varicocelectomy in order to avoid two surgical incisions and it can be a valid technique. 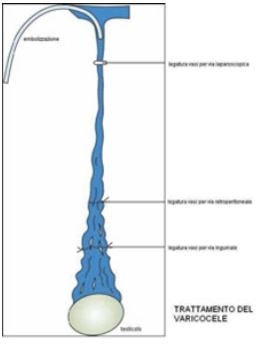 We enrolled in our study, from July 2012 to December 2014, 55 adolescents’ patients with clinical palpable and infraclinical (ultrasonic doppler scanning) varicocele. They underwent scrotal microsurgical varicocelectomy. Before surgery all the patients underwent a complete physical examination, including supine and standing scrotal examition and a color doppler ultrasound examination. Under general anesthesia, a single incision was made on the ipsilateral scrotum. (Figure1). 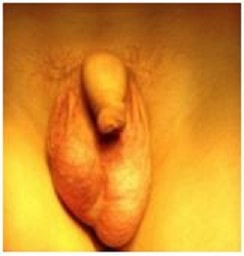 Figure 1: A scrotal incision was done. 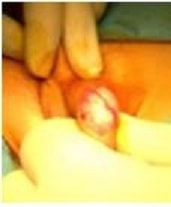 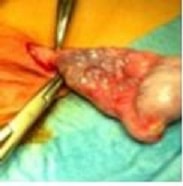 Figure 2: Exposure of left testis.   Figure 3: A resection and eversion of the tunica vaginalis was performed.

The left spermatic cord was exposed more proximally until the external inguinal ring and at this level the cremasteric and internal spermatic fascia were opened longitudinally with the exposure of the testicular vein. In this case we performed an en block ligation of the anterior spermatic venous plexus using an absorbable suture (2.0 vicryl) (Figure 5-6). In our opinion preserving the cremasteric and deferential arteries is enough to supply vascularization to the testis in cases wher the testicular artery is damaged. 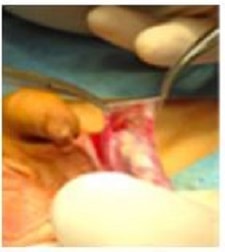 The patients were discharged on the following day unless any complications occurred in which case discharge was delayed. Complications if any were recorded. Follow up was advised at 1 week, 1 month, 3 and 6 months. Skin was closed using 5 stiches in absorbable suture 4.0 Vicryl R. Surgery for testis lasted 30 minutes. 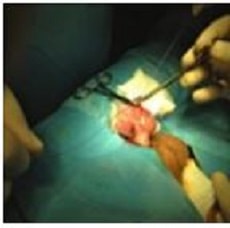 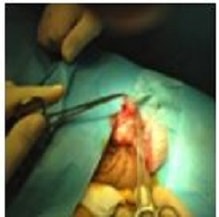 All patients were evaluated at 1 week, at 1, 3 and 6 months after the operation by means of physical examination, scrotal Doppler ultrasound, and sperm analysis ( where possible).None of the patients reported pain at 3-month followup.Edema of the spermatic cord occurred in 9pts with spontaneous regression aftert 2,5 - weeks follow up.At 6 months no other complications were reported.No case of testicular atrophy was observed.None had recurrence of varicocele.In our opinion scrotal ( sub inguinal )varicocelectomy is the best approach for unilateral varicocele because it has the advantage of allowing the spermatic cord structures to be pulled up and out of the wound so that the testicular artery, lymphatics, and small periarterial veins may be more easily identified and preserved. However, anatomic studies have proved that the diameter of the testicular artery is the main blood supply to the testis being greater than the diameter of the deferential artery and cremasteric artery combined [8].
In addition, subinguinal approach allows access to external spermatic and even gubernacular veins, which may bypass the spermatic cord and result in recurrence if not ligated.

In our opinion varicocele repair must be proposed in young adult men with impairment of seminal parameters. Patients with varicocele prefer a single incision. When the incision is made on the scrotum, no unaesthetic scars remain. The single approach reduces invasiveness and increases patients and relatives satisfaction.