This study was aimed to evaluate the women’s and male’s knowledge towards breast cancer in Libya last eight years ago. Data were recorded in the cancer registry of the Department of Oncology at Hospital of Sabrata last eight years ago from 2011 to 2018. increase over all eight years exactly in 2014. A comparison female and male patients with this study it found remarkably increased in 2015 about 14 patients of male. The occurrence of breast cancer in patients is strongly associated with age 30 – 50 years. Patients with benign breast disease were found 14 patients only in 2011. Conclusion increasing awareness between both genders is the key to early detection of the signs and symptoms, and avoiding worse prognosis. Effective communication and education between cancer patient and health care provider can improve adherence to medication and complete treatment successfully (18)

Over the past two decades, major improvements have been achieved in the understanding of breast cancer, and cure can be offered if the disease is diagnosed at an early stage. However, the disease is more often diagnosed at more advanced stages (3 or 4) in men, in contrast to women (8). Globally, breast cancer is the most common form of malignant neoplasia in females, contributing to 23% of all types of cancer (9). Breast cancer accounts for 10-18% of all cancer-related deaths and is the most common cause of cancer-related death in industrialized countries, and the third in developing countries (10).

The incidence of certain cancers is diverging between different geographic locations and populations. These differences may associate with environmental, genetic causes and ethnic. (11). There may be considerable discrepancies between developing and developed countries, considering the epidemiology of cancer diseases. Conversely, the in-progress fast industrialization and modernization in developing countries, by modifying the people lifestyle and environment, may change the epidemiologic patterns of various cancers in these regions (11).

The incidence of cancer is increasing in developing countries because of aging, and cancer-associated lifestyle factors such as smoking, obesity, and physical inactivity (12,13). Libya is a large country extends over 1,759,540 km 2, making it the largest nation in the world by size. It is located in epidemiologic transition, and cancer is the third cause of death after ischemic heart diseases and road traffic accidents (11). Therefore, it is imperative to illuminate the epidemiological status of cancers in different regions. Hence, it is essential for each region to elucidate the incidence and epidemiology of cancer disease in its own population. When diagnosed in early stages the treatment is more successful (18).The present study was aimed to evaluate the women’s and male’s knowledge towards breast cancer in Libya last eight years ago.

All histological proven breast cancer cases of males and females that were recorded in the cancer registry of the Department of Oncology at Hospital of Sabrata last eight years ago were reviewed in this retrospective study. Hospital of Sabrata is the largest teaching hospital in Libya with bed capacity of around 1000 beds and the majority of cancer cases in this registry were from all region of Libya.

Data were obtained from the computer records comprised demographic characteristics such as age, sex, residence, date of diagnosis, and site of cancer. Duplicate entry checking was carried out by comparing the data obtained from the Department of oncology and laboratory data for breast cancer cases that received from the different clinical units and clinics across the region. Sex-specific and age-specific incidence rates for eight years ago were as defined as a number of breast cancer cases for all eight years ago from 2011 to 2018 and also compare female and male of all region of Libya (Table 1).

Table 1:shows all of the breast cancer patients during the years 2011-2018

Sex-specific and age-specific incidence rates during eight years ago, the histological diagnoses were based on available pathology reports. that the number of admissions during the study period varied. Many patients entered the hospital for a preliminary diagnosis, and the patients were diagnosed, treated, followed up, and received further therapy at hospital (Table 2).

Table 2:Breast cancer patients admitted to Hospital of Sabrata during the years 2011-2018

Breast cancer is the common cancer among women worldwide(14). Breast cancer is a rare disease among men and male breast cancer is different from female breast cancers with respect to clinical-pathologic characteristics(15). The early detection of breast cancer with clinical examination offers a clear indication for a significant reduction in female mortality many women were not screened. In general, investigations are focused on trends in use, and factors associated with physicians and women’s knowledge, attitude and practice related to mammography(16).

Evidence shows that breast cancer in all region of Libya is on the increase over all eight years exactly in 2014 and in 2011 is markedly lower compare with any year (Figure 1). The apparently slow increase in incidence may be related to improved diagnostic practice (mammography, immunostaining) in the last few years in Libya. This increase may be attributed to the development in health care, including improved diagnostic facilities. The high rate of overall breast cancer cases found among Libyan females. This high rate of breast cancer is similar to the previous reports from Libya and Breast is the most common cancer among Libyan female patients with a frequency of 20% (11). 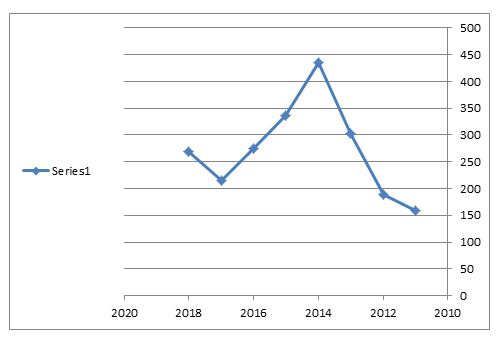 Breast cancer incidence varies considerably with ages and different eight years ago. Breast cancer was the most common cancer found in females and increased last eight years, but it also occurs in men. Increasing awareness between both genders is the key to early detection of the signs and symptoms, and avoiding worse prognosis. Young women with breast cancer can have psychological and sexual disturbances, the health professional play major role in education to enhance awareness and reduce anxiety. Effective communication and education between cancer patient and health care provider can improve adherence to medication and complete treatment successfully