The proteasomes regulate a wide range of cellular processes, including biosynthetic protein purity, gene transcription, cell cycle and apoptosis, while a proteasomal subpopulation, the immunoproteasomes, is responsible for the generation of peptides acting as immunogenic epitopes in antigen presentation to the immune cells, especially T-Cell. Here a review was focused on the immunoproteasomes needed for a successful DNA/protein vaccine.

Proteosomes are very large protein complexes, known as multisubunit enzyme complex and present in the cytosol to degrade unneeded or damaged (misfolded) proteins by proteolysis. Proteasomes are the cell’s protein recycler . Proteins need to be destroyed for many reasons: they may be damaged, or they may be part of an invading virus, or they simply may not be needed any more. Proteasomes provide a controlled method for breaking down proteins safely within the environment of the cell. They chop obsolete or damaged proteins into small pieces, about 2 to 25 amino acids in length. Most of these are then completely broken down into amino acids by peptidases in the cell. In most cells, oxidative stress and proinflammatory cytokines are stimuli that lead to elevated production of immunoproteasomes. Immune system cells, especially antigen-presenting cells, express a higher basal level of immunoproteasomes. Here how an immunoproteasome reflects its impact on vaccine platform was discussed throughout this short communication.

How does a proteasome play in immunity?

Proteasomes, usually immunoproteasome play a central role in the major histocompatibility class I (MHCI) antigen processing pathway2 . The strength of MHC class I ligand binding is dependent on the composition of the ligand C-terminus, as peptides bind by hydrogen bonding and by close contacts with a region called the “B pocket” on the MHC surface. Many MHC class I alleles prefer hydrophobic C-terminal residues, and the immunoproteasome complex is more likely to generate hydrophobic C-termini. 3 MHC class I proteins form a functional receptor known as Human leukocyte antigen (HLA). There are 3 major: HLA-A, HLA-B, HLA-C, and 3 minor MHC class I genes in HLA: HLA-E, HLA-F and HLA-G. β2 -microglobulin binds with major and minor gene subunits to produce a heterodimer HLAs corresponding to MHC class II (DP, DM, DOA, DOB, DQ, and DR) present antigens from outside of the cell to Helper T-lymphocytes, through endosome/ lysosome.

How does a proteasome play its duty?

It is capable of degrading a variety of cellular proteins in a rapid and timely fashion and most substrate proteins are modified by ubiquitin before their degradation by the proteasome. The proteasome is a large protein complex consisting of a proteolytic core called the 20S particle and ancillary factors that regulate its activity in various ways. The most common form is the 26S proteasome containing one 20S core particle and two 19S regulatory particles that enable the proteasome to degrade ubiquitinated proteins by an ATP dependent mechanism. Another form is the immunoproteasome containing two 11S regulatory particles, PA28 alpha and PA28 beta, which are induced by interferon gamma under the conditions of intensified immune response. Other regulatory particles include PA28 gamma and PA200. Although PA28 gamma also belongs to a family of activators of the 20S proteasome, it is localized within the nucleus and forms a homoheptamer. PA28 gamma has been implicated in the regulation of cell cycle progression and apoptosis. PA200 has been identified as a large nuclear protein that stimulates proteasomal hydrolysis of peptides. 4 Cytosolic endopeptidases nardilysin and thimet oligopeptidase (TOP) complemented proteasome activity5 . 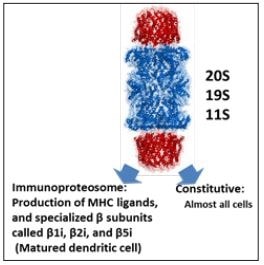 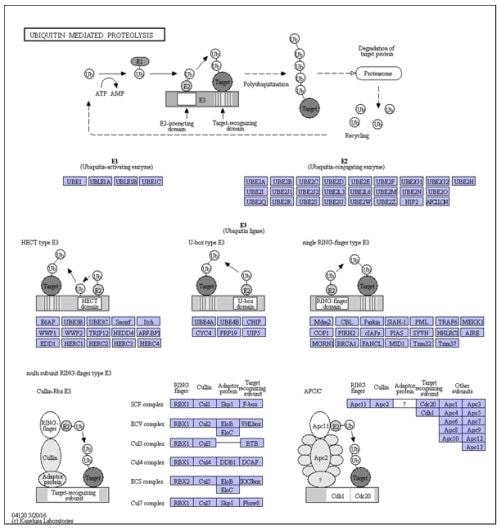 Protein ubiquitination plays an important role in eukaryotic cellular processes. It mainly functions as a signal for 26S proteasome dependent protein degradation. The addition of ubiquitin to proteins being degraded is performed by a reaction cascade consisting of three enzymes, named E1 (ubiquitin activating enzyme), E2 (ubiquitin conjugating enzyme), and E3 (ubiquitin ligase). Each E3 has specificity to its substrate, or proteins to be targeted by ubiquitination. Many E3s are discovered in eukaryotes and they are classified into four types: HECT type, U-box type, single RING-finger type, and multi-subunit RING-finger type. Multi-subunit RING-finger E3s are exemplified by cullin-Rbx E3s and APC/C. They consist of a RING-finger-containing subunit (RBX1 or RBX2) that functions to bind E2s, a scaffold-like cullin molecule, adaptor proteins, and a target recognizing subunit that binds substrates6 .

However Immunoproteosome lacking events are occurring in mammals and made the exact impact unclear. The importance of immunoproteasomes to antigen presentation has been unclear because animal’s totally lacking immunoproteasomes had not been available. Having now developed mice lacking the three immunoproteasome catalytic subunits, one research group found that the dendritic cells of these mice had defects in presenting several major histocompatibility complex (MHC) class I epitopes. During viral infection in vivo, the presentation of a majority of MHC class I epitopes was markedly reduced in immunoproteasome-deficient animals compared with wild-type animals, whereas presentation of MHC class II peptides was unaffected7 . Inhibition of the proteasome results in cell-cycle arrest and apoptosis, which is why proteasome has been attracted for the targeting cancer therapy. In such way, proteasome has been the vital organelle for both the vaccine design platform and cancer therapy as well.