The popular drink, coffee is in great attention due to its promising pharmacological effects. Caffeine (CFE), the known coffee constituent is mainly known for its prominent psychoactive effect on the central nervous system. It has antioxidant, anti-inflammatory, immunomodulatory, antimicrobial, neuro-, lung-, cardiac-, hepato-, reproductive system protective, antidiabetic, anticancer, bone formation and so forth important biological effects. However, CFE is evident to produce a number of side effects in human and other animals. This writing aims at sketching a current underlying toxicological scenario of CFE in human and other animals. Findings suggest that CFE’s toxicological impacts are plugged in its dose as well as age, sex, and pathophysiology of the patients. More precautions are needed during pregnancy, those who are planning to be pregnant, lactating women, children, and adolescents, patients with hepatic and cardiovascular complications. Additionally, CFE has toxicological effects on the reproductive system and birth weight. In conclusion, more researches are appreciated to set safe dosages of CFE in groups of consumer.

It is noteworthy that, coffee is a popular drink nowadays, as people throughout the world are starting and finishing their days with cups of coffee. The biological source of coffee is the Coffea arabica (Family- Rubiaceae), cultivated in many countries. Coffee started its journey at least 1200 years ago in Ethiopia, then followed by Yemeni Sufi monasteries in the Middle East and northern Africa, Middle East, Europe, America and so on (Wolf et al., 2008).

In a wakeful state, over time adenosine accumulates in the neuronal synapse, binds and causes activation of the adenosine receptors (especially A1, A2A, A2B, and A3) in CNS neurons and produce a drowsiness effect. Having both water- and lipid-solubility, CFE readily crosses the blood–brain barrier (Fisone et al., 2004) and placenta barrier (Mejia et al., 2014). CFE prevents adenosine to bind with its receptors, which causes the relief of drowsiness and restoring of alertness. Additionally, this antagonistic effect of CFE stimulates the medullary vagal, vasomotor, and respiratory centers, leading to an increase in respiratory and heart rates, and constriction of blood vessels. Heart palpitations along with the latter case may cause by the blockade of the A1A receptor. Moreover, this antagonism is capable to promote the release of stimulatory neurotransmitters (e.g. - monoamines and acetylcholine) (Drugbank, 2013). Otherwise, CFE can readily cross the placenta barrier and maintains the same concentration between the fetus and the mother, which may connect its abortion facilitator as well as an impaired fetus grows (Mejia et al., 2014).

During the failure of direct binding to any dopamine receptors, CFE can manipulate the binding activity of dopamine at its receptor in the striatum by binding to adenosine receptors, leading to the formation of GPCR heteromers, specifically the A1–D1 (heterodimer) and A2A–D2 (heterotetramer) forms. The psychostimulatory effect of CFE may be plugged on the latter form. The chronic use of CFE may reduce dopamine release via the stimulation of A1–A2A heterodimer in the axon terminal of glutamate neurons and leads CFE tolerance. CFE antagonizes A2A receptor in the ventrolateral preoptic area and reduces inhibitory neurotransmission, especially gamma-amino butyric acid (GABA) to the tuberomammillary nucleus, a histaminergic projection nucleus, activation of which may promote the arousal effect of it (Bonaventura et al., 2015). CFE, otherwise, through its phosphodiesterase inhibitory potential, augments the intracellular cyclic AMP (cAMP), and activates protein kinase-A (PK-A), downregulates tumor necrosis factoralpha (TNF-α) and leukotriene synthesis along with a reduction of inflammation and innate immunity. It was also inhibited the enzyme acetylcholinesterase (AChE) (Pohanka, 2014). Inhibition of AChE is associated with an accumulation of acetylcholine in the synaptic cleft and in impeded neurotransmission. Otherwise, an irreversible inhibition of AChE may lead to muscular paralysis, convulsions, bronchial constriction, and death by asphyxiation.

CFE is metabolized in the liver by the cytochrome P450 oxidase enzyme system mainly into the three dimethylxanthines: paraxanthine, theobromine and theophylline by 84%, 12% and 4%, respectively. Paraxanthine increases lipolysis, leading to an elevation of glycerol and free fatty acid levels in blood, which may be another cause of blockage of blood vessel and an obstackle for the transfer of oxygen and nutrients needed for cellular function. Otehrwsie, this situation is often termed as atherosclerosis, a common consequence of heart attack. Otherwise, theobromine dilates blood vessels and increases urine volume. On the other hand, theophylline relaxes smooth muscles of the bronchi (Caffeine, 2010). To be mentioned that 1,3,7-trimethyl uric acid is a minor CFE metabolite (Drugbank, 2013), whose actual activities yet to be found out along with the two major theobrominederived metabolites as 1-methyl xanthine and 1-methyl-6-hydroxy xanthine. Notably, the etabolism of the metabolites has taken place prior to the urinary excretion (Verbeeck, 2008). CFE metabolites are shown in Figure 1. 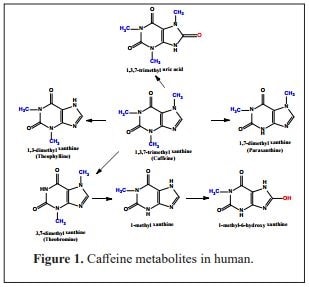 Activities of CFE on the nervous system are vastly studied in a number of animal models. This may be due to its promising psychoactive capability. However, chronic exposure to CFE (1/3 mg/mL) during pre-adolescence and adolescence were found to alter the learning and memory capacities in male C57BL/6J mice (Poole et al., 2016). In a study, during a brain development stage, CFE (0.3 and 1.0 g/L) produced an impaired memory function in female rats (Ardais et al., 2016). On the other hand, a number of studies performed with CFE, suggesting it has some toxic effects on cardio vascular system (CVS). CFE is evident to induce a cardiomyocyte hypertrophy with the release of Ca2+ from the sarcoplasmic reticulum and cytosol, leading to an activation of Ca2+ /calmodulin-dependent protein kinase II (CaMKII) and p300, which in turn enhances the expression of myocyte enhancer factor-2 (MEf2) (Shi et al., 2014). Moreover, CFE (50-250 µM) is also evident to increase the heart beat (Calvert et al., 2015).

Moreover, CFE with 100-400 mg in human is demonstrated to interfere in plasma concentration vs time of some drugs with the same pharmacokinetic profile (Cuesta-Gragera et al., 2015). Additionally, CFE with smoking, founded an association with schizophrenia patients (n = 250) (Arrojo-Romero et al. 2015). Nicotine is reported to decrease the plasma half life (t1/2) of CFE by 30 to 50%, while oral contraceptives can double it (Fredholm et al., 1999). On the other hand, the antidepressant, fluvoxamine can reduce the clearance of CFE more than 90% with an increase in elimination half-life greater than ten-fold; from 4.9 to 56 hours (Medscape, 2016). Moreover, CFE is also evident to produce an antagonizing effect in a time-dependent manner in ketamine/ xylazine anesthetized Sprague-Dawley rats (Kronschläger et al., 2014).

It is also reported that, the hormonal changes during pregnancy may slow the metabolic clearance of CFE, which may cause some complications in this category patient (Fredholm et al., 1999). A research conducted by Liguori and Robinson (2001) suggesting that the effects of CFE are affected, despite of alcohol after a cotreatment of CFE and alcohol in human.

There is no doubt that, the researches on coffee and its components, especially the CFE have attracted noteworthy scientific attention in recent years due to their promising biological activities. Among the others, CFE form coffee is consumed large and popularly for its psychoactive power. Notably, CFE is cheap and readily available. From the above discussion, it is clear that, along with a number of important biological activities CFE has some toxicological impacts, especially on developmental stages, pregnant women and the fetus, high-dose mediated sleep disturbance, cardiac and reproductive complications and so forth. Therefore, more consciousness is necessary to take CFE and caffeinated products. It should be also demonstrated that, the activities of CFE are not only age, sex and patients pathophysiology-related but also it’s dose-dependent. Unfortunately, we do not know about the exact amount of CFE in our coffee cups, as it depends on the sources and types of process. The above said consumer groups should restrict the caffeinated products also.