Double pylorus is a very rare condition mostly seen as a complication peptic ulcer disease(1, 2). The condition is defined as two pyloric openings between gastric antrum and duodenal bulb. Most commonly accepted theory is; due to the repeated erosion of an ulcer, formation of a fistula between the antrum and duodenal bulb. There is passage by the both openings and they are separated by a bridge of tissue. This bridge mostly consists of the muscular ring of the true pylorus. Contractions can be seen at the true pylorus.
Although, the real incidence of the condition is unknown it is reported to be between 0.002% - 0.04%(3, 4). The condition can also be congenital. However, congenital double pylorus is very rare(5). Most of the cases with acquired double pylorus have a history of peptic ulcer disease. However, congenital double pylorus believed to be a result of abnormal duplication of the pylorus. In this report we present a case with upper gastrointestinal bleeding with double pylorus.

Eighty-one years old male patient admitted to emergency room department with complaints of epigastric pain and melena. Patient had a haemoglobin level of 8.4 gr/dl at the admittance. He has history of cerebrovascular disease and chronic arthralgia. He also has history of chronic acetylsalicylic acid and nonsteroidal antiinflammatory drugs (NSAIDs) use. At the upper gastrointestinal endoscopy, two openings between the gastric antrum and duodenal bulb were seen (Images 1). There was fibrin clotted ulceration at the larger opening. The smaller opening has contractions and it was assumed as the true pylorus (Image 2). Gastroscope could pass through the both openings with ease. Biopsies were obtained around the ulcer. Biopsy results revealed chronic ulceration with no findings of malignancy. Helicobacter pylori was not detected at the biopsy material. The patient underwent acid inhibition by high dose proton pump inhibitors. 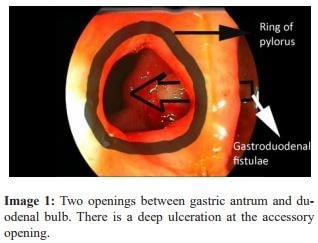 Double pylorus is a very rare condition. Although the real incidence is unknown, in several studies it is reported to be between 0.002% - 0.4% (3, 4). Commonly, double pylorus is an incidental finding during upper gastrointestinal system endoscopy(6). However, as in the current case, the ulcer leading to formation of the disorder may cause symptoms like pain or even bleeding(7). Most of the lesions are located between the gastric antrum at the side of lesser curve and superior part of duodenal bulb.
It believed that formation of a fistulae because of the gastric ulcer causes the anomaly, however duodenal ulcers may also cause double pylorus formation(8). As potential ulcerogenic drugs NSAIDs play important role in the formation of the anomaly. Similarly, our case had chronic NSAIDs use.

Treatment of the disorder mainly depend on acid suppression via proton pump inhibitors. In the current case patient was administered high dose proton pump inhibitors. Helicobacter pylori may play important role in ulcer formation and recurrent ulcers. However, in the current case we could not demonstrate helicobacter pylori at the biopsy specimens.
Surgical intervention is not the primary treatment choice for the double pylorus. However, for cases with recurrent bleeding or recurrent ulcers under acid reduction treatment surgical treatment can be the treatment choice.
In conclusion double pylorus is mostly seen as a complication of gastric ulcers. Similarly, with the causing disorder, primary treatment choice is acid suppression with antiulcer drugs and stopping usage of ulcerogenic drugs.