Design and Methods: TF, a 12-year-old male, presented to the surgical outpatient clinic with a 3 month history of abdominal pain and distention. Examination of the abdomen revealed mild tenderness in the epigastric region and an abdominal mass. CT scan of the abdomen and pelvis showed two mesenteric cysts with the largest being 15cm x 10cm x 6 cm.
Results: Both cysts originated from the small bowel mesentery and they were resected laparoscopically, placed in an endocatch bag and removed by way of the 12mm umbilical port site. Histologic evaluation of the specimen confirmed cystic lymphangioma.
Conclusion: Minimally invasive surgery has been found to be an excellent approach in the surgical management of mesenteric cysts. The operation was executed without complications, an unremarkable recovery, short hospital stay and quick return to normal activity. The laparoscopic approach should always be considered as a feasible option for this pathology

Mesenteric cysts are benign lesions that are found within the abdomen. They have an incidence that is less than 1 in 100,000 patients. While they were first described as an autopsy finding in 1507, less than 1000 have been described in the literature1. Most lesions are asymptomatic but can present with symptoms such as abdominal pain, nausea, vomiting, anorexia, and a change in bowel habits. Although most mesenteric cysts are benign, these lesions do occasionally cause complications, including intestinal obstruction, volvulus, torsion, or even hemorrhagic shock secondary to bleeding or rupture1. We present a case, which was successfully treated with minimally invasive surgery.

TF, a 12-year-old male presented with a three (3) month history of abdominal pain and a mass. The pain was intermittent in nature and located in the epigastric region. The pain was non-specific in nature and there was no alleviating/aggravating factors. There was no associated nausea, vomiting or change in bowel habits. The patient had an insignificant past medical and surgical history and no family history of malignancy.
On physical examination, his abdomen was asymmetrical, soft and non- tender and he was noted to have a mass in the mesogastric region. The rest of the general examination was insignificant. Haematological and biochemical investigations were noted to be within normal limits. CT scan of the abdomen and pelvis illustrated two thin walled multiloculated cysts arising from the small bowel mesentery; one in the midline of the abdomen (10cm x 7cm x 8cm) and another (7cm x 5cm x 4cm) was noted to be to the right of the midline, anterior to morrisons pouch and extending into the right subhepatic region [figure 1]. 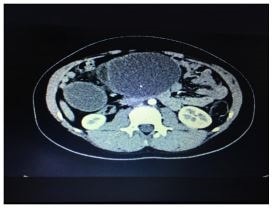 Figure 1: Transverse section view of a CT scan of the abdomen showing two separate cystic lesions of the small bowel mesentery. The arrow points at the larger of the two cysts.

A decision to undertake a minimally invasive approach was chosen to resect the cyst. A total of four trocars were used for the surgery. Initially, a 12 mm trocar (camera port) was placed at the umbilicus via the open Hasson technique, with two additional 5mm trocars (working ports) placed under direct vision in the bilateral lower quadrants and another 12mm trocar (assistant/working port) placed at the left upper quadrant. 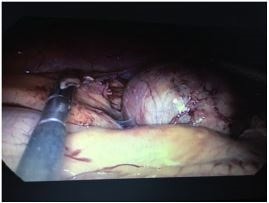 is frequently associated with a history of a previous pelvic inflammatory process, surgery or endometriosis1.
The majority of the lesions are asymptomatic but they can also present with abdominal pain, nausea, vomiting, anorexia, and a
The cysts were mobilized from the mesentery using blunt and harmonic dissection. Once free, the cysts were placed singly in an endoscopic retrieval bag and the contents were aspirated completely, with the remaining cyst wall removed from the abdomen via the 12mm umbilical port site within a surgical retrieval bag.
The mesenteric peritoneal defects were approximated with 3-0 vicryl sutures to decrease the formation of adhesions. The patient had an uneventful recovery and was discharged after two days tolerating a regular diet. Pathological examination of the cyst revealed the fluid to be benign and the histology was consistent with a cystic lymphangioma.

Mesenteric cysts are usually found in the mesentery of the small bowel (66%), mesentery of large intestine (33%), usually in the right colon. Very few cases have been reported of cysts presenting in the mesentery of the descending colon, sigmoid or rectum (approximately 1%)3. They are classified as 1) cysts of lymphatic origin, 2) cysts of mesothelial origin, 3) enteric cysts, 4) cysts of urogenital origin, 5) dermoid cysts and 6) pseudocysts. Mesenteric cysts occur with very small incidence, usually occurring in the fifth decade of life and with a female predominance4. Cystic lymphangioma is the only exception that mostly occurs in the first decade of life (up to 12 years of age) with a male predominance4, as in our case.

The etiology of mesenteric cyst is variable. They usually arise from developmental abnormalities of the mesenteric lymphatics or from their traumatic rupture. Simple lymphatic and mesothelial cysts are most likely congenital, while the benign cystic mesothelioma change in bowel habits. The most common physical finding for a mesenteric cyst is Tillaux’s sign2. This is described as a mass lesion of the abdomen only mobile in the horizontal plane. Most of these cysts are discovered incidentally during an abdominal imaging done for another reason. Ultrasound and CT scan can distinguish between solid and cystic characteristics of the abdominal mass, and CT scan is usually sufficient in making an acurate diagnoses in all cases1.

Surgical excision of mesenteric cysts is the preferred method of treatment and may or may not involve resection of the adjacent bowel. Procedures such as marsupialization and drainage are associated with high recurrence rates and are best avoided. Though the operating time is longer with laparoscopy, it has advantages of minimal access, which includes less postoperative pain, shorter hospital stay, early return to normal activity and better cosmesis5,6. Mesenteric cysts have a good prognosis and no recurrence have been reported following complete excision of the cyst5,6.
Depending on the size and site of the mesenteric cyst, where difficulty of ease of handling may be accounted, aspiration of the cyst may be done initially or at a later stage to ensure safe and complete excision in order to prevent recurrences7. Minimally invasive surgery has been found to be an excellent approach in the surgical management of mesenteric cysts8.

Minimally invasive surgery has been found to be an excellent approach in the surgical management of mesenteric cysts. The operation was executed without complications, an unremarkable recovery, short hospital stay and quick return to normal activity. The laparoscopic approach should always be considered as a feasible option for this pathology.

The patient and his parents’ approval was taken.