Adjuvanted trivalent influenza vaccines containing 3.75 µg of each antigen strain with alum and riboflavin or Bordetella pertussis MPLA were tested in mice. Immune response was evaluated by haemagglutination inhibition test, ELISA and antibody affinity test. The highest increase in antibody titers was obtained with the formulation containing MPLA. Significant increase in HAI titer was observed when mice received the formulation containing MPLA and alum, with a clear cross reaction between B lineages. Corroborating our previous results with monovalent vaccine, this study confirmed the adjuvant formulations containing MPLA or Riboflavin as promising adjuvants to be evaluated in clinical trials.

Seasonal influenza vaccines are usually composed by antigen, i.e., split virus, in a physiological buffer containing or not conservatives. The use of adjuvanted vaccines with reduced antigen amount in humans have already showed efficacy in a monovalent formulation (Precioso et al, 2011) and could be an important tool for antigensparing, for reducing costs or to increase the immune response to new pandemic strains, taking in account the use of an affordable adjuvant.

At the same time, since 2013, WHO has been recommended the use of quadrivalent influenza vaccines containing two strains of type B lineages (Yamagata and Victoria) once both lineages have been co-circulating (WHO). However, this increase in vaccine cost might be a trouble in low income and developing countries either financial and product availability. A formulation that could elicit cross-reacting antibodies to B lineages would be especially useful to solve this situation. In light of these facts and considering previous results for monovalent A/H1N1 vaccine (Quintilio et al, 2016; Precioso et al, 2011), in this paper we describe the effect of MPLA and riboflavin combined to alum as adjuvant as a proof-of-concept for trivalent influenza vaccine. The effect of the formulations on eliciting antibody titers and on cross reactivity between B strains (Yamagata and Victoria) were evaluated in order to elucidate the choice for better candidate vaccine adjuvant.

Mice were immunized intraperitoneally (0.5 mL) with trivalent influenza vaccine (3.75 µg of each antigen strain, considering 2014 Southern hemisphere composition) with or without adjuvant (32.5 µg of riboflavin with 0.25 mg of alum or 5 µg of MPLA with 0.25 mg of alum/dose). At 21, 60 and 67 days after immunization, individual serum was obtained by submandibular bleeding and was kept at 20 °C until antibodies quantification tests. In order to evaluate immunological memory response, at day 60 the mice received a booster containing 1/10th of the first dose of trivalent vaccine without adjuvant.

Haemagglutination Inhibition test (HAI) was performed individually by using guinea-pigs red blood cells suspension at 1 %. Titers were reported as the reciprocal of the highest sera dilution that completely inhibits haemagglutination. HAI titer ≥40 is considered a correlate of protection in humans [EMEA, 2015].
ELISAs to determine antibodies titers against each antigen separately were performed as described previously (Quintilio et al, 2016). Two fold dilutions of individual sera were incubated in ELISA 96 wells polystyrene plates (Costar) coated with antigen at 1 µg/mL. HRP anti-mouse IgG conjugate was used to detect IgG titers with 3,3’,5,5’-tetramethylbenzidine as substrate. Antibody titers were calculated by sigmoidal curve model (Combistats© - EDQM) by comparison to the unadjuvanted vaccine at day 21, which titer was arbitrarily considered 1.

For affinity ELISA measurements, the assays were performed as described above, but including a potassium thiocyanate (KSCN; 0 to 10 M, dilution factor 1.5) step as described (Guidolin et al, 2013) after the serum incubation (dilution 1/400). The results are expressed as affinity index (AI): KSCN concentration (mol/L) needed to displace 50% of the bound antibodies. Each vaccine strain was tested separately including the B Victoria strain in order to check cross reactivity. All graphs were prepared by using GraphPad Prism® 5.01 for MS-Windows™. Statistical analysis was performed by using GraphPad Prism® 5.01. Kruskal-Wallis and Dunns’ multiple comparison tests were applied (p<0.05).

Based on the previous results, the formulations containing MPLA, riboflavin and alum were evaluated in order to characterize the immunological response against the A/H1N1, A/H3N2 and B/ Yamagata influenza antigen in a trivalent vaccine. Besides to the cross reactivity against B/Victoria lineage individual HAI and antibody titration by ELISA (IgG) and affinity induced by the vaccine formulations were evaluated.
Individual HAI results corroborated the previous experiments (Quintilio et al, 2016). Adjuvanted formulations induced higher antibody titers than the unadjuvanted vaccine for all strains (Fig. 1). There were no significant differences between formulations after booster. However, before the booster, for A strains, especially, the use of adjuvants elicited higher HAI titers. When the cross-reactivity between B lineages was evaluated, 21 days after immunization, only MPLA with alum induced mean titer 1/40, the other two groups elicited lower antibodies titer (Fig. 1). Nevertheless, the HAI titer increased during time and after booster there was a significant difference between MPLA+alum group and unadjuvanted vaccine. 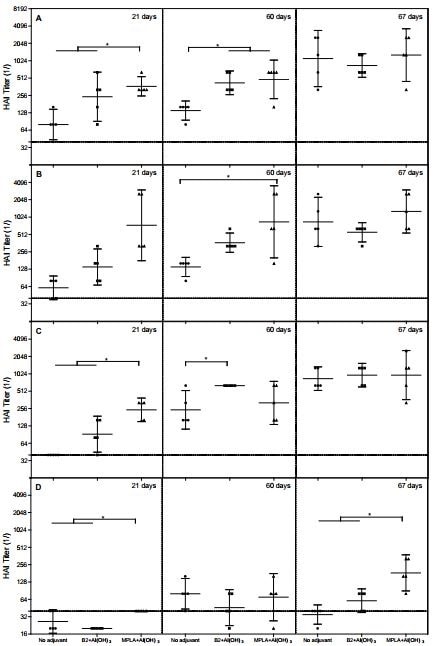 Figure 1. HAI GMT (the error bars indicate 95% confidence interval): (A) A/H1N1; (B) A/H3N2; (C) B/ Yamagata; (D) B/Victoria. Mice received the trivalent influenza vaccines at day 0 (initial) and a booster (0.375 µg of each antigen) at day 60. They were bled and the sera were titred with guinea-pig red blood cells at 21, 60 and 67 days after initial immunization. Dotted line indicates the minimum protective titer. * indicates statistically significant differences among groups.

Reflecting these HAI results, IgG titer indicated that formulation containing alum+MPLA induced higher titers after booster against all strains. Despite the positive response against B/Victoria lineage, IgG titers were significantly lower than those observed against B/ Yamagata (Fig. 2). 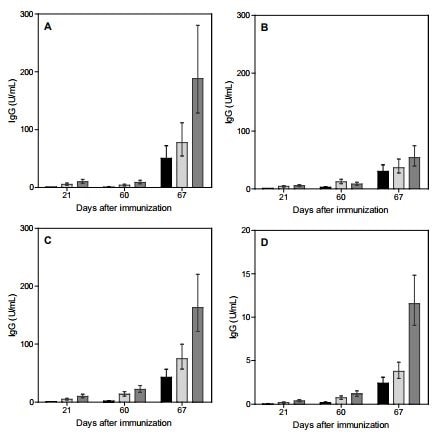 In order to check if the increased titers were related to higher antibody affinities, an affinity ELISA was performed. After booster, all groups presented an increased affinity. However, when animals received vaccines with alum and MPLA the affinity index increasing was remarkable (Table 1). Riboflavin with alum presented an adjuvant effect more evident for A strains, but MPLA with alum was more effective in all cases. 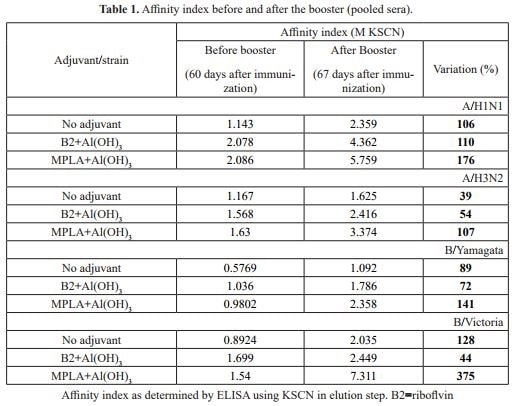 It is important to emphasize that in this study the influenza vaccine contained 1/4th of the regular human dose. Meaning that by following this approach, there could be an important antigen spare, multiplying by 4 in theory the production plant capacity.
Previous published work (Quintilio et al, 2016) examinated the use of vitamins and MPLA as adjuvants for vaccines and at that moment, riboflavin with alum and MPLA with alum were the most promising adjuvants. Before trying with trivalent vaccine, one assay with monovalent A/H3N2 and B/Yamagata strains was performed, confirming the results obtained for A/H1N1 (data not shown). And the same profiles were observed also here with the trivalent vaccine. Except the affinity ELISA: the results were different from those obtained previously for adjuvanted monovalent H1N1 vaccine (Quintilio et al., 2016), likely due to the presence of other antigens, in our experimental model.
In the studied conditions MPLA with alum induced higher antibody titers than those obtained with riboflavin and alum. Further studies must be performed in order to characterize the effect of each adjuvant formulation. Many studies have been pointed that the use of quadrivalent vaccines could reduce hospitalizations number and work absenteeism presenting therefore a good cost-effectiveness ratio (Gordon et al, 2016; Zerbini et al, 2016). At the same time it is known that by using adjuvant, cross-reactive antibodies have been observed in a clinical assay in humans (Camilloni et al, 2009).
The results presented here indicate that MPLA with alum may elicit cross-protection, potentially mimicking a quadrivalent influenza vaccine containing though 1/4th of the antigen usually present in conventional vaccines. In spite of the fact that a human is not a 70 kg mouse, these results are useful to steer the vaccine development and critical answers only a clinical trials in humans can bring.

The authors would like to acknowledge Dr Celso Pereira Caricati for the kind and helpful support, DDTP for the MPLA supply. Maria Rosa Lange da Silva and Marisa de Souza Silva de Oliveira for the support in animal housing. Financial support by Fundação Butantan.