Immune cells may serve for vaccine technology and for gene therapy. They are basically of lymphocyte and dendritic cell types. These cells can be of adoptive and educated forms .Dendritic cell based vaccine technology can be established through ;In-vitro, ex-vivo and/ or in-vivo procedures. Subunit target antigen loading onto DCs or through insertion of gene construct cloned into a specific viral or plasmid vectors .Dendritic cell based vaccine designs are found of use for infectious and cancer diseases .Experimental dendritic cell based vaccine specific for ;viral ,bacterial ,fungal and protozoal infectious diseases are being ongoing in current research. Tuberculosis in man and animals is problematic at worldwide scale including our country. The approved BCG vaccine is being of questionable efficacy in infants, immune-compromised and pulmonary tuberculosis patients .
The SO2 attenuated live tuberculosis vaccine is in its way for clinical trials .Experimental dendritic cell based vaccine designs specific for tuberculosis are being of educated DCs loaded with the target protein ,peptide or trans-fected with gene construct codes for these proteins .Laboratory animal immune evaluations have found to be the inserted gene DC is superior to antigen loaded Dc based vaccines in sense of immune protectivity. The current layout of tuberculosis vaccine is; BCG questioned ,SO2 is being in its way for clinical trials and DC-based vaccine still experimental. Approved Dc based tuberculosis preventive and therapeutic forms are still the near future goal of vaccinologists all over the world.

Dendritic cell serves as critical vaccine adjuvant or vaccine design for prevention and /or treatment of microbial infections ,allograft rejection treatment of cancer and autoimmune diseases[1].The objective of the present mini-review is to sum-up the current attitude about the DCs based vaccine for the rather common disease all in this area or over the world ,the tuberculosis[2,3,4,5,6] .

As a phagocyte and phagocytosis in turn, they definitely appeared as functional professional phagocytes in earth worm with coelum passing through the evolutionary animal group ranks up to vertebrate[ 7] .Boney fish devoted from bone marrow with an evident extra-medullary heamopoiesis[ 8] .From amphibian up to mammals, bone marrow haemopoiesis were evident[6].In boney fish ,however. mononuclear cell system appeared as Melanomacrophage centres in spleen and in liver[9,10,11] .

Tracing the ontogeny of the mononuclear cell system ,it is rooted back to embryonic yolk sac,then fetal liver and fetal bone marrow during the embryonic life of the fetus.They arose as pluri-potent stem cells[12,13] .

The embryonic stem cells are; self re-new-able ,multi-potent ,and non-differentiate cells with a set of characteristic surface markers .These surface markers can be changed on differentiation to definite cell entity. Such cells have the ability to be differentiated to any cell type in accordance with the surrounding micro-environmental tissue mellue .Among these cell entities are the mononuclear cell system[14]

Macrophage is a general term denoted to all cells of the mononuclear cell system that have phagocytic activity. Mononuclear cell system(MCS) is a group of human and mammalian leukocytes harboring peripheral blood and the reticculo-endothelial organs ,with rather different surface markers, Table 1.They performed an array of immunobiologic functions[6]. Mature mononuclear cell forms and functions varies in accordance with their own surrounding tissue microenvironment Their nomenclature will be; glail, alveolar ,kupffer ,dendritic ,Langerhans, monocyte and osteoclasts harboring ;brain, lung ,liver, lymph node and bone marrow ,skin, blood and bone respectively[15,16,17].
The MCS displayed the functions of; uptake, process, present and immune recognize the antigens as a preliminary step in the immune response events .In ,Pyres patchs ,MCS have the antigen delivered by M cells, they take up and present it to helper T cells then triggering B or T cell responses. At the lymph node interdigitating dendritic cell delivered antigens directly presenting them to B lymphocytes to initiate immune response events.
Langerhans cells are skin defenders .Kupffer cells in liver on antigenic stimulation undergoes shape changes and increase in numbers within the liver paranchyma and contribute to the local liver immunity against the invading pathogens[18] .Resting alveolar macrophage in lung tissue melliue are small ovoid in active, on stimulation they appeared larger in size and becomes rather ameboid in shape[18] .Glail cells in brain and CNS tissues during infectious invasion undergoes cell form changes to satellite appearance, increase in numbers and produce cytokines as well as contribute in tissue regeneration[19] .Osteoclast contribute in bone tissue catabolism. Monocytes are phagocytic ,antigen presenting, cytokine producer and might be differentiated into immature dendritic cells then to mature dendritic by local cytokine action[13].MCS, form the model systems for testing; phagocytosis, macrophage inhibitory factor, ex-vivo cytokine production and antibody production by B lymphocyte[ 20,21,22].

DC is satellite in shape with irregular nucleus in mature form and bean shaped nucleus and ameboid shaped in the immature form. DCs are professional phagocytes and acting as antigen presenting cells(APC).They process antigens through MHCI,MHCII and CD1 pathways .DCs circulating within the host capture and deliver microbial and/or cancer cell subunit antigens.
Their circulation starts from lymphoid tissue to peripheral blood and back to lymphoid tissue. DCs differentiation path starts with lymphomyeloid progenitor cells to pro-monocyte immature monocyte then to mature monocyte .From monocyte by the effect of cytokine to immature DCs then to mature DCs. The surface marker for both mature and immature is basically the same but with marked quantitative differences, Table 2 ,DCs are hetero-genus group of cells that displayed difference in various anatomic sites ,cell surface phenotypes and functions. Thus ,its sub-grouped into three subsets, Table 3 .DCs expressed a sort of cell plasticity[23,24,25].

Immune cells can be of use for vaccine or gene therapy technologies. The most tempted immune cell types were lymphocytes and dendritic cells[26,27,28].These cells are either in adopted or educated forms. Hence several technologic trends are currently useable for educating DCs to be valid as a base for vaccine technology both for preventive and therapeutic vaccine types .Details of the DCs based vaccine technology are being stated in the followings;
i-Blood samples with anti-coagulants collected from patients .dendritic cells are separated, purified and incubated with the subunit antigen of the causal and re-injected back to the patients[29].
ii-Ex-vivo approach involves the separation purification and culturing of DCs in cell culture system. Then the target gene construct is added through an appropriate vector to facilitate its journey to the appropriate target cells[29].
iii- Blood samples with an anti-coagulant collected from the patients, dendritic cells are separated, purified and cultured in cell culture system in presence of antigen source, loading agent ,maturation agent[23] .
iv-In-vivo within the host, antigen targeted to dendritic cell through binding to ICAM3 DCs sign or to CD209 establishing promising in-vivo loading of antigens to DCs[30].

For an effective DC-based vaccine designs development against polio, measles, and hepatitis B. These vaccines composed of microbial antigens are often made with adjuvant ,Table 4 , that activate DCs .There are urgent need for both preventive and therapeutic vaccine for tuberculosis replacing the currently blamed as ineffective the BCG[ 31].Since till now no approved dendritic cell based tuberculosis vaccine are developed, evaluated and licensed. However several experimental DCs based tuberculosis vaccine tested iv-vitro, ex-vivo and in-vivo to the rank of laboratory animal evaluations are being documented all over the world[23,30,31,32].

The M tuberculosis is obliged intracellular pathogen on invasion of the host it will stimulate Th1 or Th1 and TH2 responses[33] at the week 4 up to the week 12,the immune conversion sought as cytokine rise in concentration and/or specific antibody concentration or titres together with immune protection percentages .Here we abstracting two experimental vaccination protocols in laboratory animal models to give a clue to the nature of post vaccination immune conversions.
i-Three groups of mice were the test laboratory animals;first wa vaccinated with DC loaded with Ag85,the second with DC loaded CD4/Cd8 T cell peptide and the third vaccinated with adeno-virus cloned with Ag85 gene transfected to DCs. The of IL12 and was more immunogenic than group one and two. Comparing the first group to the second and third. The third elicited a remarkably higher levels of ex-vivo INFg at the weeks 2,6 and 12 postimmunization which was paralleled with high frequency of Antigen specific T cells[34].
ii- Two groups of mice were the test laboratory animal.The first immunized with calf Mtbag-calf serum –DCs vaccine and the second immunized with Mtb ag-mouse serum-DCs vaccine in a three doses protocol, animal was watched in first ,second and third dose in both groups for bacillary load after challenge, INFg level, survival and immune protection percentages. The second group have shown reduced bacillary load in lungs and spleen, increase of survival times, and as well as increase of INfg producing cells in lung and lymphoid tissue .DC based vaccine group two pays critical role in induction of protective immunity against M tuberculosis challenge[35].

NHI in here monograph published in 1998[36],”Understanding Vaccines” have been put-forward set of criteria for evaluation of prototype or candidate vaccines in this paragraph we apply this set of criteria onto tuberculosis DC based vaccine and the evaluation layout is depicted in the table 5 . 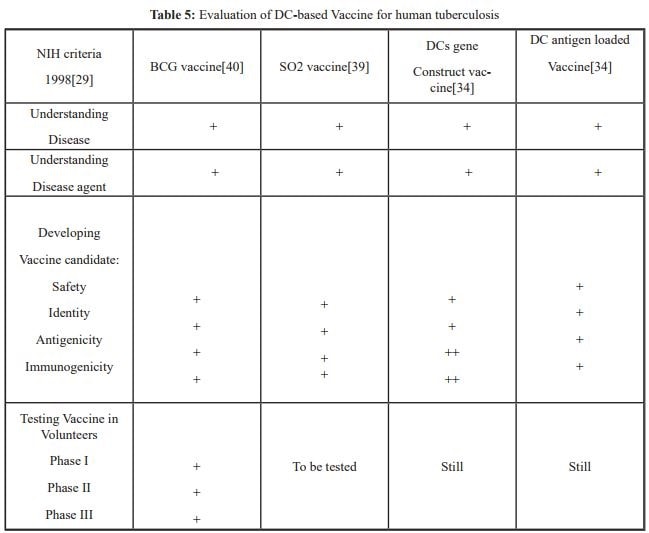 Dendritic Cell Based Vaccine In Brief: